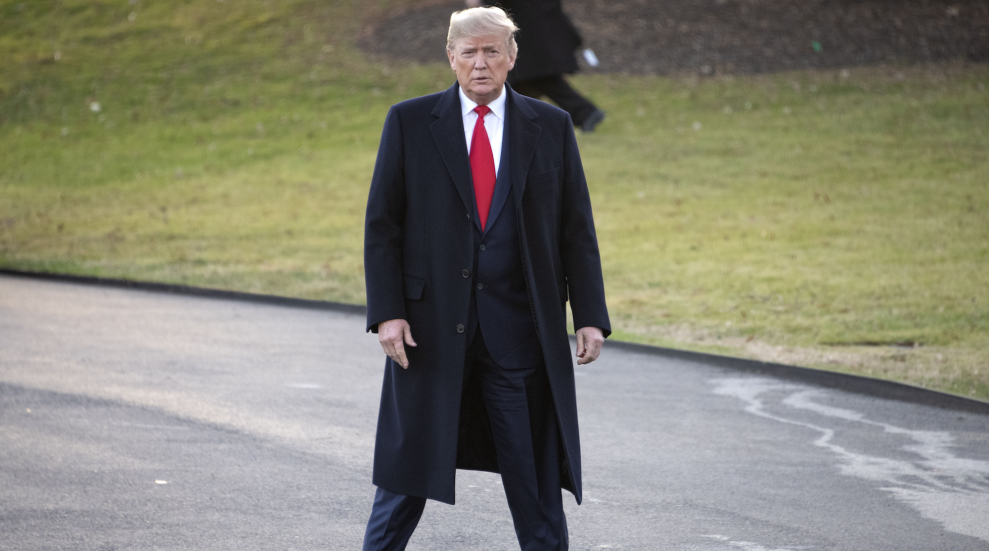 On Monday, President Donald Trump’s Twitter account kicked off an unusually active round of inflammatory and offensive activity that saw multiple falsehoods, typos, and cheap shots against his Democratic presidential rivals.

In what could be considered the most appalling moment, the president retweeted a fake, poorly Photoshopped image of House Speaker Nancy Pelosi (D-Calif.) and Senate Minority Leader Chuck Schumer (D-N.Y.) wearing traditional Muslim clothing while standing in front of the Iranian flag. “The corrupted Dems trying their best to come to the Ayatollah’s rescue,” the tweet read, echoing the false and incendiary accusation among the right that Democratic leaders looking to rein in Trump’s war powers are somehow un-American and puppets of the Iranian regime.

Trump’s decision to further amplify the accusation came days after Rep. Doug Collins (R-Ga.) on Friday was forced to apologize for claiming that Democrats critical of Trump’s foreign policy are “in love with terrorists.”

But this was only the beginning. Trump also lashed out at mounting evidence that Qassim Soleimani, the top Iranian military leader targeted by Trump’s military strike earlier this month, may not have posed the “imminent threat” on American lives the White House had initially claimed in the immediate aftermath of Soleimani’s death. That original tweet misspelled “imminent” as “eminent.”

The Fake News Media and their Democrat Partners are working hard to determine whether or not the future attack by terrorist Soleimani was “imminent” or not, & was my team in agreement. The answer to both is a strong YES., but it doesn’t really matter because of his horrible past!

Elsewhere in Monday’s tweet frenzy, Trump went after the 2020 Democratic hopefuls, seizing on reports of tension between Bernie Sanders and Elizabeth Warren while conferring on Michael Bloomberg the disparaging nickname “Mini Mike.” Further attacks against the billionaire candidate also included the brazenly false claim that Trump has been the one to protect pre-existing conditions in health care reform. (That single tweet contained such a thick layer of lies we broke them all down here.)

Bernie Sander’s volunteers are trashing Elizabeth “Pocahontus” Warren. Everybody knows her campaign is dead and want her potential voters. Mini Mike B is also trying, but getting tiny crowds which are all leaving fast. Elizabeth is very angry at Bernie. Do I see a feud brewing?

The news that Sen. Cory Booker (D-N.J.) was dropping out of the presidential race inspired still more tweeting.  Just minutes after Booker’s announcement, Trump combined both sarcasm and sheer meanness when he announced that he can “rest easy tonight.”

Really Big Breaking News (Kidding): Booker, who was in zero polling territory, just dropped out of the Democrat Presidential Primary Race. Now I can rest easy tonight. I was sooo concerned that I would someday have to go head to head with him!