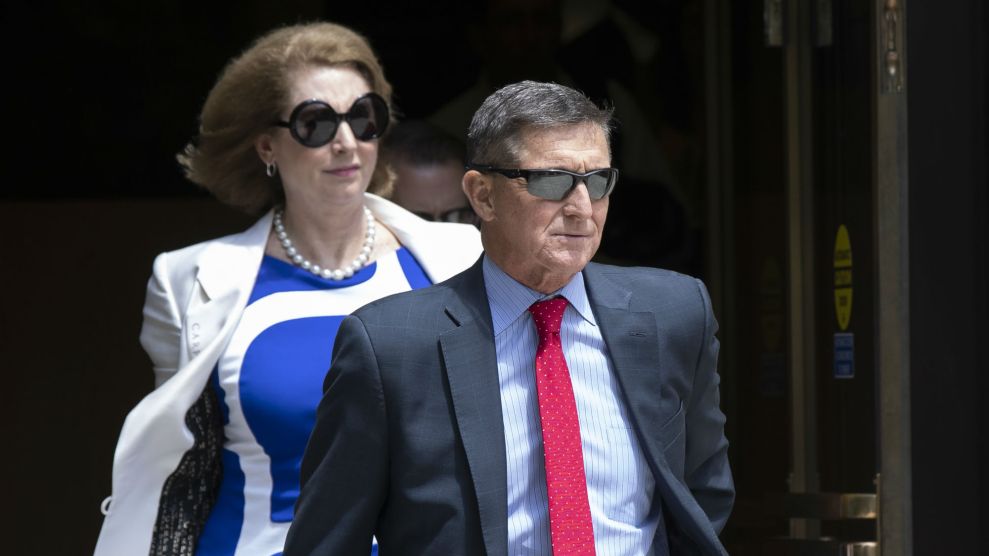 Just over a year ago, special counsel Robert Mueller’s office recommended that former national security adviser Michael Flynn receive no prison time for lying to the FBI. Prosecutors at the time praised Flynn for providing “substantial assistance” to law enforcement. But on Tuesday, those prosecutors reversed course, excoriating Flynn for failing to accept responsibility for his crimes and for “his affirmative efforts to undermine” a separate prosecution in which Flynn had agreed to act as a witness. Flynn, they argued, should now receive up to six months of jail time.

Flynn’s case dates back to the presidential transition period in 2016. In December of that year, the Obama administration slapped Russia with sanctions in response to its efforts to assist Donald Trump during the election. Flynn, who Trump had chosen to serve as national security, then spoke by phone with Russian Ambassador Sergey Kislyak. According to the Mueller report, Flynn urged Kislyak not to escalate the dispute and then told another transition official that Russia would refrain from doing so because it “wanted a good relationship with the incoming Administration.” But in January 2017, Flynn told FBI agents that he had not discussed sanctions with Kislyak at all. Flynn reportedly also lied to Vice President Mike Pence about the calls, which led to his firing as national security adviser. In late 2017, Flynn agreed to plead guilty to lying to the FBI and also admitted that he had lied to the Justice Department about his secret lobbying for Turkey while advising Trump. Flynn agreed to cooperate with prosecutors in exchange for their recommendation that he receive a reduced sentence.

But prosecutors now say that Flynn began to undermine that deal in June 2019, when he hired a new lawyer, Sidney Powell. While Flynn’s former lawyer, Robert Kelner, maintained a low profile, Powell is a frequent Fox News guest and strident Mueller critic who has publicly professed Flynn’s innocence. Powell also attempted to walk back Flynn’s past admission that he secretly lobbied in 2015 for Turkey, a reversal that led a federal judge last year to toss prosecutors’ case against Bijan Rafiekian, Flynn’s former lobbying partner.

Prosecutors told the court Tuesday that Flynn’s recent behavior has caused them to abandon their earlier request for leniency. “Based on the defendant’s conduct since the time of the December 18, 2018, sentencing hearing, the government also does not believe the defendant should receive credit for acceptance of responsibility,” prosecutors said in a sentencing memo. “Indeed, the government has reason to believe, through representations by the defendant’s counsel, that the defendant has retreated from his acceptance of responsibility in this case regarding his lies to the FBI.”

The filing displays prosecutors’ irritation with Powell, who filed motions attacking their conduct. She has also tried to link Flynn’s guilty plea to a host of allegations and conspiracy theories advanced by Trump and his allies in an effort to discredit investigations into the Trump campaign’s contacts with Russia. Mother Jones reported in August that Powell was involved in a decision by Flynn to try to raise funds for his defense by appearing at a rally organized by adherents of the QAnon conspiracy theory, which posits that Trump is secretly battling a ring of pedophiles that includes many prominent Democrats. Flynn subsequently pulled out of the event, and it was canceled.

Flynn surely hopes to win a pardon from Trump. But for the moment, his decision to hire Powell appears to have backfired badly, leaving him facing a probable jail term he might otherwise have avoided.

Prosecutors cited various arguments made by Powell—including a letter she sent last year to Attorney General William Barr urging the Justice Department drop its case against Flynn—as evidence that Flynn has contradicted earlier statements in which he accepted responsibility for lying to FBI agents and to the Justice Department. “Far from accepting the consequences of his unlawful actions, he has sought to blame almost every other person and entity involved in his case, including his former counsel,” they argued. “Most blatantly, the defendant now professes his innocence.”

While it is standard for defendants to claim innocence, it is not normal for someone who has already pleaded guilty to do so. At sentencing, judges often consider the extent to which defendants accept responsibility for their actions.

The sentencing memo also explains that prosecutors have reconsidered their previous conclusion that Flynn provided substantial assistance. That’s because Flynn was expected to appear as the main witness last summer in Rafiekian’s trial and to testify that the men misled the Justice Department by claiming they were not aware that a Dutch company they had agreed to represent was in fact a front for Turkey. Less than three weeks before the trial, Powell walked back Flynn’s prior admission and instead blamed Kelner for Flynn’s false claims. This reversal led a federal judge to throw out the government’s case against Rafiekian.

Freed of a desire to reward Flynn for cooperation, prosecutors are now highlighting the seriousness of his conduct, blasting him for an “abuse of trust” as national security adviser. “The only reason the Russian Ambassador contacted the defendant about the sanctions is because the defendant was the incoming National Security Advisor, and thus would soon wield influence and control over the United States’ foreign policy,” prosecutors said. “That is the same reason the defendant’s fledgling company was paid over $500,000 to work on issues for Turkey. The defendant monetized his power and influence over our government, and lied to mask it. When the FBI and DOJ needed information that only the defendant could provide, because of that power and influence, he denied them that information. And so an official tasked with protecting our national security, instead compromised it.”