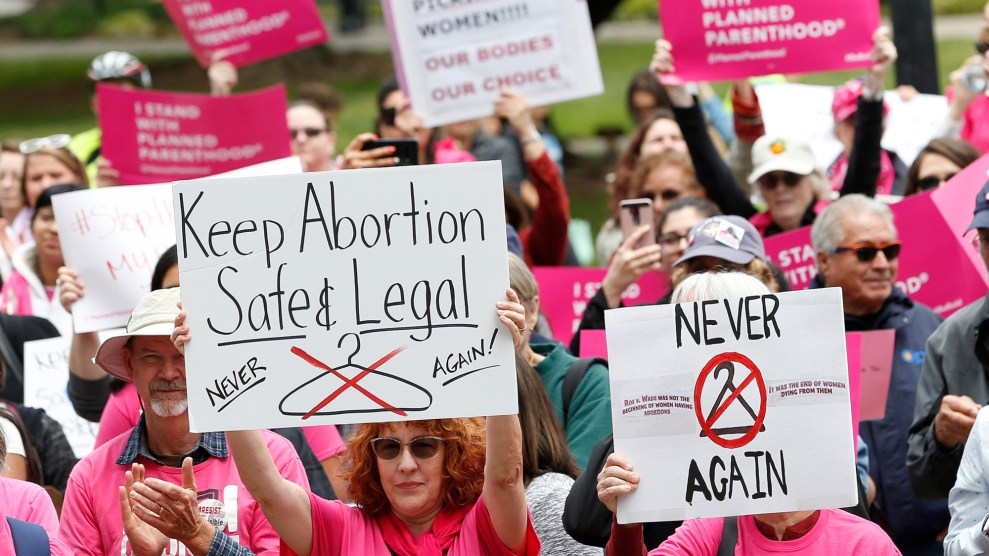 People rally in support of abortion rights at the California state Capitol.Rich Pedroncelli/AP

If California does not remove the abortion coverage requirement, the Trump administration says it will withhold federal HHS funding.

“Once again, President Trump’s administration is delivering on his promise to protect human life and all Americans’ freedom of conscience,” said HHS Secretary Alex Azar in a statement. “Under President Trump, HHS has been vigorously enforcing the statutes Congress passed to protect Americans’ consciences and institutionalizing these protections within the department’s civil rights work.”

Meanwhile, the state’s attorney general says he “will fight this by any means necessary.”

We will fight this by any means necessary.

HHS’ threat also has ramifications that extend beyond California, which started mandating abortion coverage for all private insurance back in 2014. According to the Guttmacher Institute, six states, including Illinois, New York and Oregon, require private insurers to provide abortion coverage. Earlier this month, an Oregon anti-abortion group filed a complaint challenging Oregon’s abortion requirement, and a similar complaint was filed in Illinois last fall. Both complaints mirror HHS’ allegation that such laws violate what’s know as the Weldon Amendment, which states that no HHS funds “may be made available to a Federal agency or program, or to a state or local government, if such agency, program, or government subjects any institutional or individual health care entity to discrimination on the basis that the health care entity does not provide, pay for, provide coverage of, or refer for abortions.”

Laws like California’s are meant to keep insurance companies from discriminating against women who seek to terminate their pregnancies. They require that insurance providers treat abortion “neutrally,” just as they would any other maternity service.

In keeping with the administration’s anti-choice media blitz, Trump congratulated himself at the March for Life, saying “the unborn have never had a stronger defender in the White House.” Azar recently referred to HHS as the “Department of Life.”

“This is just another in a long line of dark and dystopian moves from Donald Trump and the anti-choice movement attacking our reproductive freedoms,” said Ilyse Hogue, president of NARAL Pro Choice America, in a statement about Azar’s comment. “There is no limit to the depths Trump will sink to in order to attack women and score political points with his fringe, radical base. Once again, it’s abundantly clear that the Trump administration is desperate and eager to deceive in order to deflect attention from the scandals the president is embroiled in. And women and families will pay the price.”