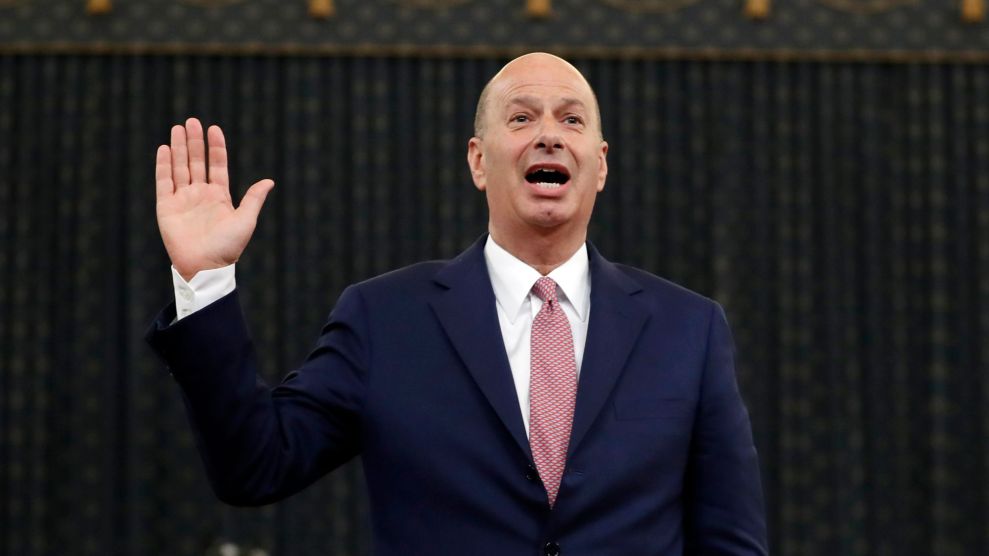 According to a New York Times article over the weekend, a group of GOP senators that included Susan Collins (Maine), Martha McSally (Ariz.), Ron Johnson (Wis.), and Thom Tillis (N.C.) “tried to stop” Trump from firing Sondland. The senators privately argued to White House officials that the optics of such a move would be terrible and that Sondland should instead be allowed to leave on his own terms, the Times reported.

But the Times story included another remarkable tidbit. According to the paper, these same senators had no objection to the removal of Vindman, who on Friday was escorted out of the White House by security guards:

The senators did not express the same concern about Colonel Vindman, who is viewed less sympathetically by the president’s allies. Republicans considered some of Colonel Vindman’s comments during his testimony overtly political and, in any case, believed it was untenable for him to remain on the staff of a president with whom he broke so publicly.

At first blush, the idea that Vindman could be “viewed less sympathetically” than Sondland is difficult to comprehend. Sondland appeared to be an incompetent ambassador who had essentially purchased his position by donating $1 million to Trump’s inaugural committee. He played a leading role in pressing Ukraine to investigate Trump’s political enemies and was forced to revise his congressional testimony after initially omitting significant details. Vindman is an Iraq war veteran, Purple Heart recipient, and Ukraine expert who reported Sondland’s nefarious activities to White House lawyers and then jeopardized his own career by testifying.

Let’s start with Tillis. According to FEC records, Sondland has donated more than $38,000 to Tillis’ various political committees since 2016. As the Oregonian explained last year:

Sondland first donated to Tillis in 2016. That same year, Sondland and [his wife Katherine] Durant’s foundation donated for the first time to Duke University in Durham, North Carolina. Duke received $1.7 million from the foundation over the next three years. Both of Sondland and Durant’s children now attend the school…Tillis introduced Sondland at the June 2018 Senate confirmation hearing on his nomination as European Union ambassador. He cited Sondland’s family history as the child of Jewish immigrants who escaped Nazi Germany, his business experience and his ability to build relationships and manage competing interests.

“I would also tell you he’s a man of great character and a great mentor to two of his kids who had the good sense to go to a North Carolina school,” Tillis said.

Sondland hasn’t donated directly to Collins, Johnson, or McSally. But in recent years, he has donated more than $68,000 to the National Republican Senatorial Committee, which supports GOP Senate candidates. And as it happens, Tillis, Collins, and McSally all have tough reelection fights coming up this fall.