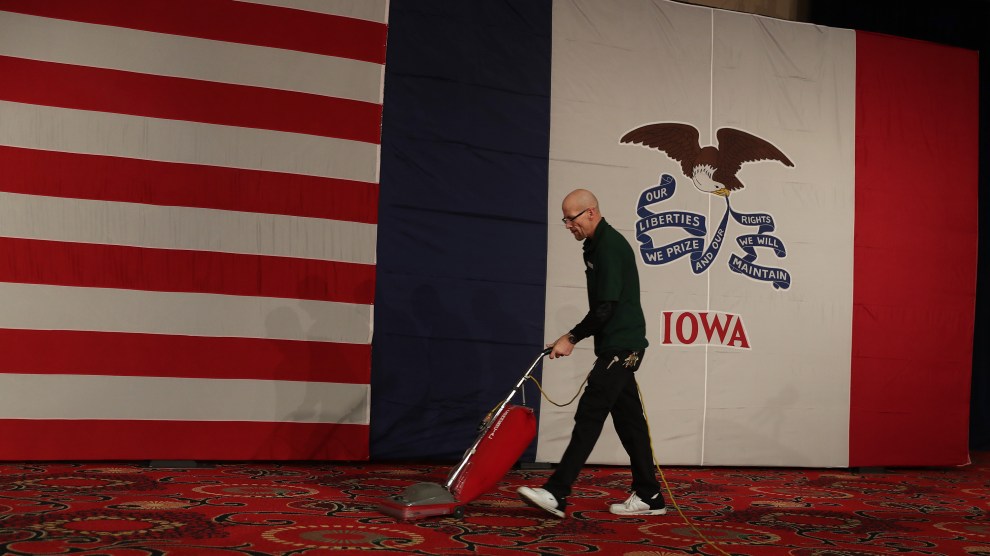 A man vacuums the carpet before the start of the caucus night celebration party for Democratic presidential candidate Sen. Bernie Sanders on Monday in Des Moines, Iowa. Joe Raedle/Getty Images

Amid the chaos of the uncharacteristically late results from Monday’s Iowa caucuses, Republicans have been seeding the unsubstantiated narrative that the contest was somehow rigged.

As reports emerged that volunteers administering the caucus were having trouble using an app meant to help the state Democratic party tally the results, and that the party was delaying release of the results for “quality control,” high-profile conservatives, including ones associated with President Donald Trump’s campaign began baselessly lobbing claims that the election was being rigged.

Trump’s campaign director, Brad Parscale, was one of the first major accounts on Twitter to suggest that a hoax was afoot, writing “Quality control = rigged? 🤔.” Trump’s adult sons, Donald Jr. and Eric, quickly joined in by tweeting their own version of the unsubstantiated “rigging” hoax. Republican National Committee spokesperson Kayleigh McEnany also claimed that Democrats were “rigging it.”

The accusations continued into the morning, most notably when Sen. Lindsey Graham (R-S.C.) suggested there was a conspiracy.

What are the odds that:

➡️ most anticipated poll of the year (@DMRegister) is cancelled.

….and it has nothing to do with a Bernie blowout and a Biden crash?

Other prominent internet right-wingers like Mike Cernovich and Shashank Tripathi, who tweets under the handle @ComfortablySmug, also glommed onto the baseless “rigged” narrative. The theory appears to have now taken hold in right-wing circles, as Donald Trump Jr., conservative internet personality Charlie Kirk, and others continued to boost it well into Tuesday afternoon.

Jennifer Grygiel, a communications professor at Syracuse University who specializes in social media and memes, said that the chaotic failure was perfect kindling to spur conspiracies. Reports of the failure of the app, which was designed by a company called “Shadow Inc.”, were “unusual—that just piques this idea of questioning the narrative you’re being told,” Grygiel said. “It doesn’t mean there is an actually any attempt to hack manipulate apps or anything like that, but conspiracy theorists will jump on it anyway.”

“There are few mechanisms to stop them.”

Trump allies had already set the framework for false claims of election rigging earlier in the day. Late Monday morning, Judicial Watch, a conservative activist group with a history of spreading disinformation, published a false report alleging that “Eight Iowa counties have more voter registrations than citizens old enough to register,” claiming this was evidence of voter fraud.

Facebook reacted to the false information by enabling warnings on posts about Judicial Watch’s claims relaying that fact-checkers had deemed them untrue, but it only did so hours after the fact, long after the posts had spread.

Grygiel says tech companies’ unwillingness or lack of ability to slow down the spread of such disinformation benefited conservatives who were working to establish a myth damaging to their political opponents.

“Conspiracy theorists are taking advantage of platforms that have very little ways to stop the spread of this kind of information,” Grygiel said. “Memers are going to create content to be shared on social media knowing that the platforms are polluted, and that there are few mechanisms to stop them from going viral.”