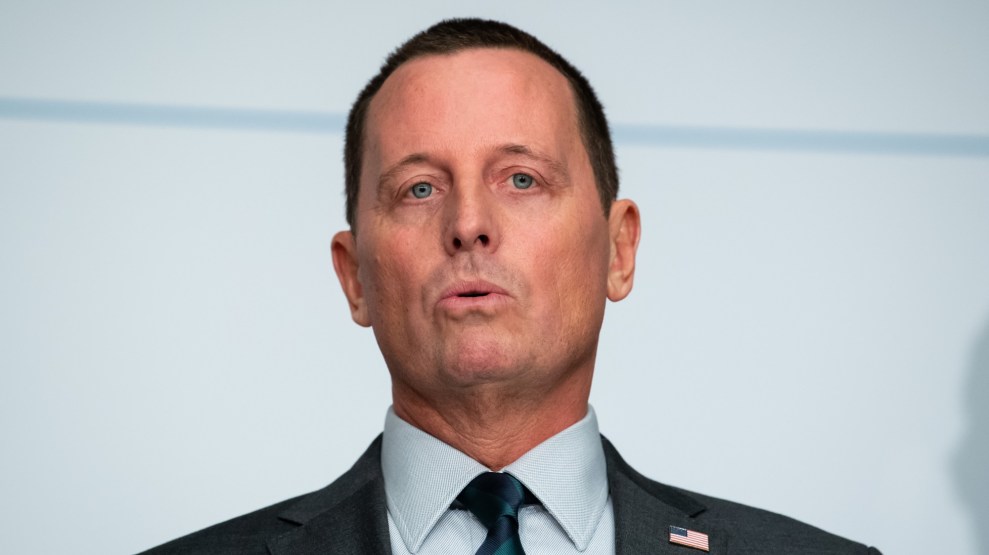 Following a 2017 Senate hearing on Richard Grenell’s nomination to be ambassador to Germany, Sen. Ben Cardin (D-Md.), submitted some quite specific written questions to the nominee.

“I understand that you have written many articles and op-eds over the past eight years on foreign policy issues, including with respect to Moldova,” Cardin wrote. “Did you receive any payment or any other form of compensation for your writings on Moldova?” Cardin also asked Grenell: “Did anyone request or direct you to write op-eds on Moldova.?”

Grenell answered “no” to both questions. He said he “did not receive any compensation for” his op-eds and stated, “The op-eds that you are referring to—like all of the op-eds that I have written or the personal opinions I have expressed publicly—reflect my informed views and ideas and not anyone else’s.”

Last week, after President Donald Trump made Grenell his acting director of national intelligence, ProPublica reported that Grenell was a paid advocate for a Moldovan politician, Vladimir Plahotniuc, at the time he wrote op-eds defending Plahotniuc against corruption allegations. (Grenell argued in those pieces that Plahotniuc was a victim of Russian disinformation.)

This work has raised charges that Grenell should have registered with the Justice Department under the Foreign Agents Registration Act, or FARA, as an agent for Plahotniuc. Reporting this week revealed Grenell’s former public affairs firm, Capitol Media Partners, was also paid $103,750 in 2016 by the Magyar Foundation of North America, which is funded and supervised by Hungary’s far-right government.

Now, the top Senate Democrat is alleging that Grenell may have deceived lawmakers.

“Mr. Grenell may have misled Congress during his confirmation hearing to be U.S. Ambassador to Germany when asked about his writing on foreign policy and any compensation he received for his work related to Moldova,” Senate Minority Leader Chuck Schumer (D-N.Y.) wrote in a letter Wednesday to Assistant Attorney General John Demers. Schumer also asked Demers to investigate whether Grenell violated FARA.

It “is imperative that your office determine as soon as possible whether Mr. Grenell has violated the law,” Schumer wrote “If so, he should be referred for enforcement action consistent with Justice Department policies and without regard to any political considerations. Any illegal activity would obviously disqualify him from serving as the Director of National Intelligence or in any other position of public trust.”

Neither the White House press office nor Elliot Berke, an attorney representing Grenell, responded to questions about Grenell on Wednesday. Craig Engle, an attorney who had addressed media questions about Grenell’s work for foreign entities, said he had only worked on the matter for one day and is no longer involved. “I’m done with that,” Engle said.

Engle previously told ProPublica that Grenell “was not paid” to write op-eds defending Plahotniuc. Engle also said Grenell did not need to register under FARA “because he was not working at the direction of a foreign power.”

People who do any work in the United States on behalf of a foreign politician, party, or government are generally required to register under FARA, even if the work is unpaid. The law requires companies that work directly for foreign governments and firms that work indirectly, as subcontractors, to register with the Justice Department as foreign agents.

Grenell reported in a financial disclosure form submitted when he was nominated as ambassador to Germany that his firm was paid more than $5,000 by Arthur Finkelstein, a since-deceased Republican political consultant who boasted a litany of foreign clients, including many in Eastern Europe. ProPublica reported that according to two sources, Grenell worked for Finkelstein as a media consultant for clients in Eastern Europe, including Plahotniuc.

Berke previously told the Washington Post that Grenell’s work for Finkelstein was unrelated to Plahotniuc or any foreign client. “Ambassador Grenell did not work for Arthur Finkelstein’s clients, nor was he aware of who they were,” Berke said. “He gave Mr. Finkelstein media and strategic advice, and made introductions to United Nations diplomats and officials. Ambassador Grenell has never worked for a foreign government or politician, paid or unpaid. Any suggestion to the contrary is misleading and uninformed.”

Prior to joining the government, Grenell boasted of his work for a host of foreign clients. An archived version of his firm’s website, since altered, cited clients that included Somalia and a private television network in Afghanistan, according to a report by Responsible Statecraft, a blog of the Quincy Institute for Responsible Statecraft, a foreign policy think tank. The report also noted that an archived version of Grenell’s personal website, since taken down, states: “Grenell has worked with clients based in the U.S. as well as Iran, Kazakhstan, the Democratic Republic of the Congo, Somalia, China, Australia, Timor-Leste, and throughout Europe.”

Grenell has not registered to represent clients in any of those countries.