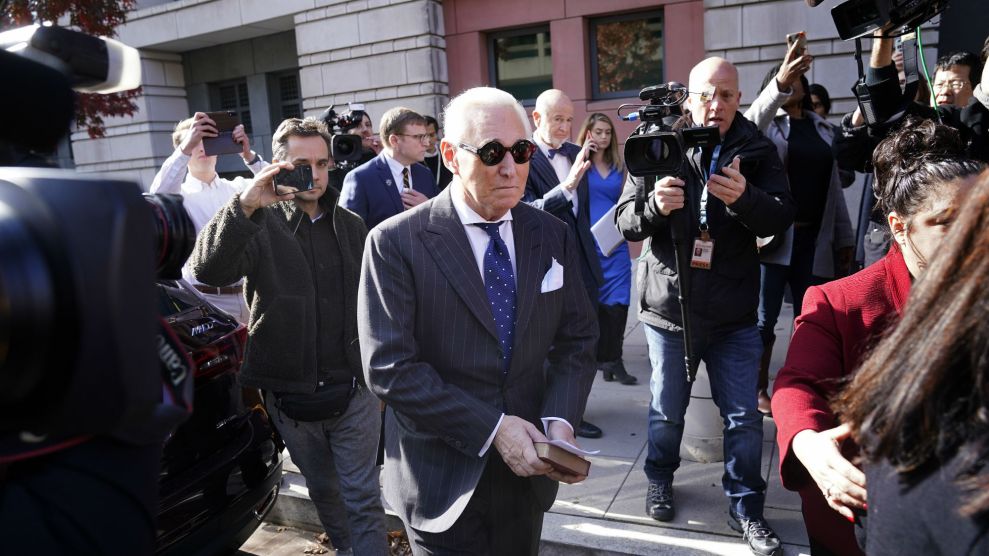 The Justice Department released its sentencing memo for Roger Stone on Monday and it’s not looking great for the longtime Trump consigliere: Department prosecutors asked a federal judge for a sentence of up to nine years in prison. Stone was convicted in November of five counts of making false statements to Congress, obstructing justice, and witness tampering.

“A sentence that includes a period of incarceration would serve as a powerful reminder that our democratic processes can function only if those called to testify tell the truth, and that serious consequences lie in store for those who do not,” prosecutors say in the memo.

Stone’s trial revealed that the colorful Trump adviser had sold himself to the Trump campaign back in 2016 as a conduit to WikiLeaks, passing along to the campaign info about the group’s plans to release Democratic emails that we now know were stolen by Russian intelligence. Evidence in the trial showed that Stone communicated directly with Trump about WikiLeaks during the campaign—a revelation that suggests Trump likely lied in written answers to Special Counsel Robert Mueller when he claimed not to recall  “discussing WikiLeaks with” Stone or knowing that his longtime adviser had “discussed WikiLeaks with individuals associated with my campaign.”

The sentencing memo notes that Stone is subject to a stiffer sentence because he was convicted of an offense that “involved causing or threatening to cause physical injury to a person, or property damage, in order to obstruct the administration of justice.” That refers to an April 2017 email Stone sent to Randy Credico, a former radio host and Stone associate, that stated, “Prepare to die, cocksucker.” In another email, Stone threatened to take Credico’s dog “away from [him].” Prosecutors argued these messages aimed to keep Credico from telling the truth, specifically in challenging Stone’s claim to the House Intelligence Committee that Credico was his only intermediary to WikiLeaks in 2016.

The memo also asks Judge Amy Berman Jackson to take into account a February 18, 2019, Instagram post in which Stone posted a picture of her with a “symbol that appears to be a crosshairs next to her head,” along with commentary that criticized her oversight of the case and noted she was appointed by President Barack Obama. After that incident, Jackson imposed a gag order on Stone—which he apparently broke when Alex Jones, the far right conspiracy theorist, read on Infowars a message Stone apparently sent Jones asking Trump to pardon him; the memo also makes note of this apparent violation.

“Roger Stone obstructed Congress’s investigation into Russian interference in the 2016 election, lied under oath, and tampered with a witness,” prosecutors say at the conclusion of their memo. “And when his crimes were revealed by the indictment in this case, he displayed contempt for this Court and the rule of law.”