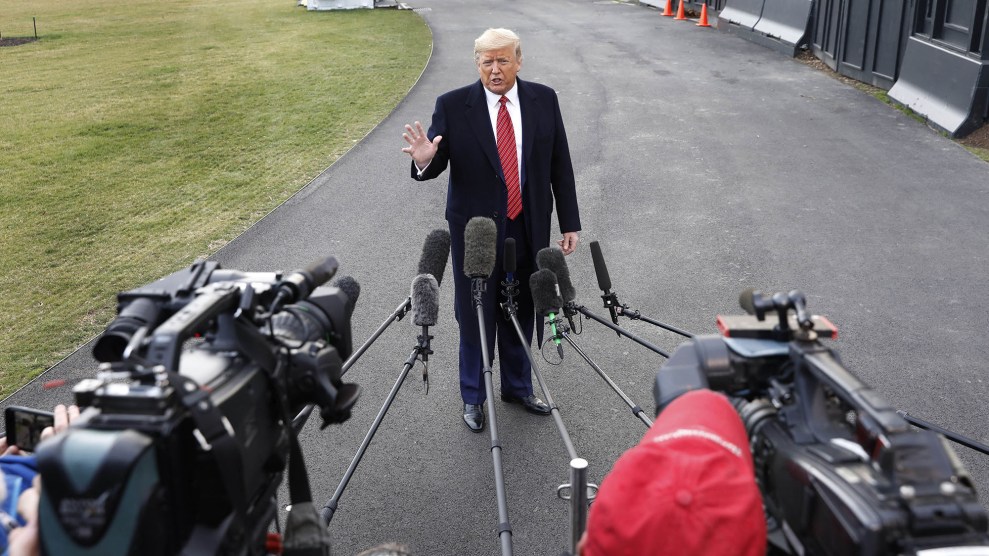 2:30 p.m. ET: Trump on Saturday announced the first death inside the US from the coronavirus. The victim was a woman in her 50s with underlying health problems, he said, adding that additional cases are likely.

On Wednesday, in front of a packed White House briefing room, President Trump told the country there were only 15 cases of coronavirus in the US, and “within a couple days [it is] going to be down to close to zero.” This contradicted both the CDC’s Anne Schuchat, who’d said minutes earlier from the very same stage that “we do expect more cases,” and Health and Human Services Secretary Alex Azar, who’d said “we can expect to see more cases in the United States.”

The next day, on the White House lawn, Trump told reporters that Democrats were trying to weaponize the situation to hurt him and said the media was “doing everything they can to instill fear in people, and I think it’s ridiculous.” The people who weren’t giving him credit for his handling of the situation “don’t mean it. It’s political.”

Then, at a political rally in South Carolina on Friday night, Trump called the coronavirus the Democrats’ “new hoax,” and as the crowd chanted “build the wall,” he said that “the Democrat policy of open borders is a direct threat to the health and well-being of all Americans.”

Trump’s germophobia, xenophobia, and persecution complex had coalesced into a message: This overblown scare will soon be a memory.

As much as we’d all like for that to be true, the coronavirus doesn’t seem to be cooperating just yet. Late Friday officials in the three West Coast states announced three new cases, none of which could be explained by overseas travel or contact with someone who had traveled overseas, the New York Times reported.

“If we were worried yesterday, we are even more worried today,” Dr. William Schaffner, an infectious disease specialist at Vanderbilt University Medical Center, told the Times. “Now we have to ask: How widely, really widely, is this virus out there?”

There are now upwards of 85,000 cases worldwide, the vast majority of which are in China, according to data collected and maintained by Johns Hopkins University. The data show that the vast majority of people who contract the virus recover, but, to date, 2,933 people have died as a result.

There are 66 cases in the US, according to the Johns Hopkins data, although the CDC figure sits at 15 confirmed cases as of Friday. The difference between the two figures is a result of the CDC not including people returned to the US via State Department–chartered flights.

Unlike Trump’s rosy message that fears around the virus are a media concoction, public health officials in some places are communicating something much different.

“We’re going to be increasingly recommending that people try and avoid crowds and close contact with other people,” Dr. Jeff Duchin, a public health official in Washington state, told the Times. “We may get to a point where we want to recommend canceling large public gatherings—social events, sporting events, entertainment—until we get over a hump of what might be a large outbreak.”