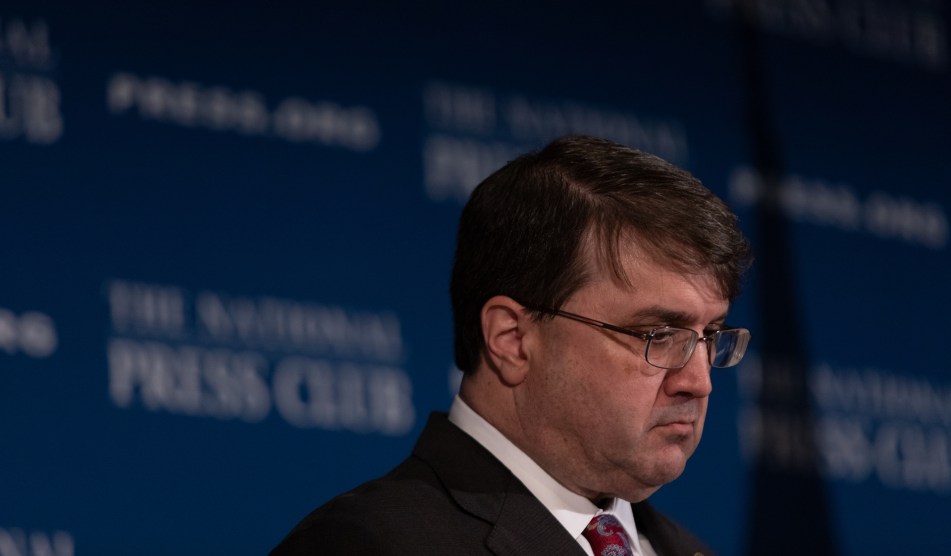 This story was originally published by ProPublica, a nonprofit newsroom that investigates abuses of power. Sign up for ProPublica’s Big Story newsletter to receive stories like this one in your inbox as soon as they are published.

Secretary of Veterans Affairs Robert Wilkie personally sought damaging information about a congressional aide who said she was sexually assaulted in a VA hospital, according to an anonymous complaint to the House committee the woman works for.

The written complaint was obtained by ProPublica. In addition, a former senior official with direct knowledge of the matter said Wilkie discussed damaging information he collected about the aide and suggested using it to discredit her. Another person said he spoke with other officials who were in those discussions, and they corroborated the former senior official’s and the written complaint’s account. The people interviewed spoke on the condition of anonymity, saying they feared retaliation.

Wilkie denied inquiring into the aide’s past. “I never would do that to a fellow officer,” he said in a statement. “It is a breach of honor.”

The aide, Andrea Goldstein, is a Navy reserve intelligence officer and a senior policy adviser for the House Veterans’ Affairs Committee’s Women Veterans Task Force. In September, she said she was sexually assaulted at the VA medical center in Washington. According to Goldstein’s account reported in The New York Times, she was buying a snack in the cafeteria when a man slammed his body into hers, pressed against her and told her, “You look like you could use a good time.” Goldstein said she did not know who the man was, but he was not an employee.

As required by VA regulations, Goldstein’s allegation was turned over to the department’s inspector general to conduct an independent criminal investigation, working with federal prosecutors.

The House committee said it is considering how to respond to the complaint, spokeswoman Jenni Geurink said. While the committee has oversight jurisdiction over the VA and often fields complaints from employees and patients, it is in an unusual position since this complaint relates to one of its staff members.

“We have been contacted about possible actions taken within VA which may have utilized government time and resources to attempt to tarnish a member of our staff’s character, discredit her and spread false information about her past in retaliation for her reporting of a sexual assault at VA,” Geurink said. “This ordeal has been draining and unfair to Ms. Goldstein.”

According to the complaint and the former senior official, Wilkie repeatedly shared the information he had gathered about Goldstein with his senior staff, including officials responsible for public relations, between October 2019 and January 2020. One of the officials present, Assistant Secretary for Public and Intergovernmental Affairs James E. Hutton, did not respond to requests for comment.

“Wilkie’s energies are directed toward attacking her character,” the complaint said.

Wilkie did not specify the source of his information but said he wished his findings could be used to undermine Goldstein’s account of the assault in the Washington VA, the complaint and the former senior official said. While Wilkie did not direct anyone to do anything with the information, he wondered aloud about how it might become public, according to the complaint and the former senior official.

Wilkie, through a spokeswoman, denied saying that.

Wilkie also met in his office with Rep. Dan Crenshaw, R-Texas, who is a former Navy commando. After the meeting, Wilkie told his staff that Crenshaw agreed with the allegations that Wilkie made about Goldstein’s credibility, according to the complaint, the former senior official and the other person with knowledge of the meeting.

Wilkie denied discussing Goldstein with Crenshaw. Crenshaw, in a brief interview in the Capitol, confirmed that he met with Wilkie. “I had breakfast with him once,” Crenshaw said. “I know where this rumor’s coming from. So you have a bunch of Democrat staffers who are leading you guys down a really stupid path. I’ve never been asked about the case, never been told about the case.”

Wilkie and his staff have not publicized the information he collected about Goldstein’s past. But after the inspector general concluded its investigation and federal prosecutors declined to bring charges, Wilkie sent a Jan. 15 letter to Congress calling Goldstein’s complaint “unsubstantiated” and saying it “could deter our veterans from seeking the care they need and deserve.”

Wilkie’s letter prompted an objection from the VA’s inspector general, Michael Missal, who said calling Goldstein’s allegations “unsubstantiated” was “not an accurate description of the results of our investigation.” The Times reported that the criminal probe was hindered because video cameras that might have captured the incident at the hospital weren’t working.

“Neither I nor my staff told you or anyone else that the allegations were unsubstantiated,” Missal wrote to Wilkie. “Reaching a decision to close the investigation with no criminal charges does not mean the underlying allegation is unsubstantiated.”

Goldstein, in an op-ed published Monday on the website Jezebel, criticized Wilkie, saying that his letter to Congress was retaliation for her reporting the assault and that she had also faced retaliation from a military commander when she reported sexual harassment while on active duty. She said she receives treatment at the VA for conditions related to sexual trauma during her military service.

Asked about the subject at a post-State of the Union press conference on Wednesday, Wilkie said he was “not satisfied with the resolution of the Goldstein case” and wants to reexamine it.

“I met with the [inspector general] yesterday,” he said. “We’re going to make a renewed push to get answers.”

But the inspector general’s office later said the investigation remains closed. “We are not working with anyone to seek additional information at this time,” a spokesman said.

A spokeswoman for Wilkie later clarified that he wasn’t asking to reopen the investigation but wants to receive more details of the inspector general’s findings. “At a minimum, the IG should let VA and committee leaders know if its investigation found any wrongdoing so the department can take action to protect and safeguard our patients,” VA press secretary Christina Mandreucci said. “We need this help to make sure our facilities are safe.”