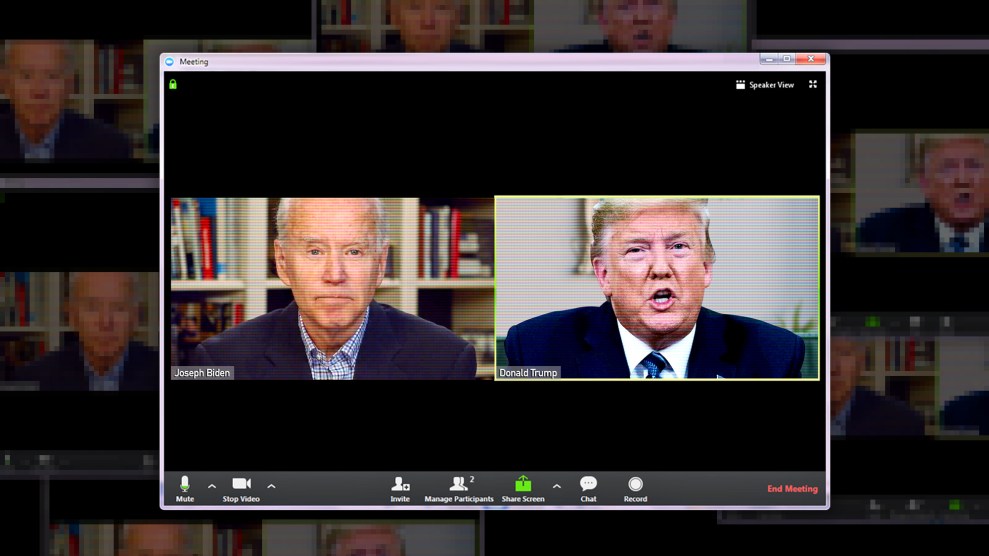 In the fall of 1920, Warren G. Harding won the biggest popular-vote landslide in history without ever holding a rally. Instead of hitting the trail, the Republican nominee let the campaign come to him. About once a day, Harding emerged from his home in Marion, Ohio, to address a small crowd of voters and reporters, who wrote up his remarks for their readers across the country. A multimillion-dollar advertising budget took care of the rest. Harding’s “front-porch campaign” was a product of its time—a more dignified manner of politicking in an age when traditional campaigning was sometimes seen as gauche. (When Democrat William Jennings Bryan went on tour in 1896, one critic said he was “begging for the Presidency as a tramp might beg for a pie.”)

But a century later, the long-distance campaign is back by default. The coronavirus has shut down political campaigning—and virtually everything else. Neither former Vice President Joe Biden, the presumptive Democratic presidential nominee, nor Vermont Sen. Bernie Sanders has held in-person events with voters since before the March 10 Michigan primary. President Trump has canceled his rallies for the foreseeable future. Candidates at all levels across the country are adapting and experimenting on the fly, as they wrestle with how to engage supporters, persuade voters, and raise money when many Americans are stuck inside, sick, or out of work. Biden greets his grandkids from his front porch; he’s greeting voters from his basement.

“I’m not sure anybody really knows what a completely virtual and online campaign really looks like and anybody who says they do is lying,” said Addisu Demissie, a Democratic operative who managed New Jersey Sen. Cory Booker’s presidential campaign.

And that’s really the only sure thing right now: For the time being, whatever happens is going to have to happen remotely. When Sanders’ campaign announced ahead of last Tuesday’s primaries in Arizona, Florida, and Illinois that it would not undertake any traditional get-out-the-vote efforts, it was merely codifying what was already happening. Campaigns have quit door-knocking, petition-gathering, and holding in-person town halls and rallies. Now they’re figuring out how to fill the void.

Getting in front of a camera is probably the easiest problem to solve, at least from a technical standpoint. Trump, of course, can get on TV whenever he wants and has turned his daily briefings on the pandemic into freewheeling campaign-style riffs. Sanders has invested for years in virtual events; since going to ground, he’s held “fireside chats” in front of a wood stove at his Burlington home; filmed short messages from his back yard; and brought in key surrogates for a Hollywood Squares–style split-screen conversation on the pandemic.

Biden started off on shakier footing. At a fundraiser on Sunday (held via teleconference) one donor said they were “concerned” that “we see Donald Trump every day with this crisis,” asking the candidate, “How do we get more of you and less of him on our airwaves?” Campaign aides initially told ABC that his home’s low ceilings made it difficult to get good-enough light. But by Monday morning he had a studio in his game room, fully optimized for TV hits and livestreams.

A bigger challenge for candidates is figuring out how to do all the other things that in-person gatherings are designed to accomplish—rallies, for instance, are important organizing efforts, a chance for the campaign to gauge how it’s doing, collect information on thousands of voters, sign up volunteers, and forge connections with targeted communities.

“What we’re gonna lose is some of the connection to less-engaged voters—someone who isn’t really following the election but their more-engaged friend brings them to a campaign event,” said Zack Malitz, a Texas-based Democratic consultant who ran Beto O’Rourke’s field program during his 2018 Texas Senate run. Bringing a friend to go see the Strokes is easy; getting them to join a campaign call on Zoom is trickier. That speaks to a broader problem: maintaining the sense of community that binds large volunteer networks together. Campaigns thrive in social spaces—coffee shops and campaign offices and living rooms (to say nothing of front doors). Translating that to a laptop takes effort.

Without retail politics and in-person events, candidates will have to find other ways to reach voters, too. You might get a lot more phone calls, for one thing. “Just because people can’t talk face to face doesn’t mean they can’t talk person to person,” Malitz said. Social distancing will put a premium on things like peer-to-peer texting, “relational organizing” (in which supporters mine their lists of friends and family to spread the good word), and phone banking.

He pointed to field research showing that a one-on-one conversation with a candidate was the most powerful way to persuade a voter—more than an advertisement or speaking with a volunteer. And with most of the country staying home, the odds of actually reaching someone on the phone have gone way up.

“So you can see certain campaign operations that have lots of volunteers making phone calls to voters to identify supporters, and then the candidate following up with the undecided voters to have persuasion conversations with them,” Malitz said.

One area where candidates are struggling to adapt to the new normal of campaigning is fundraising. J.D. Scholten, a Democrat running against Rep. Steve King in Iowa’s 4th Congressional District, told me he’d canceled several big fundraisers ahead of the March 31 quarterly deadline and was squeamish about asking small-dollar donors for money at a time when businesses are shutting down en masse. (Instead, like other candidates, he’d used his fundraising list to raise money for local charities.)

“We’re trying to figure out how to do that but also in a very respectful way because there’s a lot of people losing their jobs,” he said. “There’s a way to do it tastefully and a way to do it poorly.”

Last Thursday, the Republican National Committee and the Trump campaign, following in the footsteps of Biden and the DNC, announced they would halt all planned fundraisers and instead raise money online and via virtual events. Sanders does not hold in-person fundraisers, but he recently used his email list to raise $2 million for various charities.

This is typically a time in the election cycle when campaigns that have already made it through their primaries might go relatively quiet and concentrate their energy on raising and saving lots of money so they can build out quickly in the months to come. Now, there’s a lot less money coming in and no sense of what the next few months will even look like.

All of this—the uncertainty, the austerity, the emphasis on digital work—means that campaigns will have to get more out of less.

“The people who are gonna solve this problem are gonna be the 23-year-old digital staffer and the 25-year-old fundraising staffer,” Demissie predicted. “This is a time for people who live their life online to shine.”

Biden, Sanders, and Trump are at least starting from a position of near-universal name recognition, with broad coalitions of supporters, volunteers, and donors. As my colleague Kara Voght reported, the social distancing measures present a unique challenge to candidates down-ballot who are still in the process of introducing themselves to the electorate.

Nowhere is that felt more acutely than the New York City metro area, home to 5 percent of all global coronavirus cases and—unlike other places where the virus has hit hard, such as California, Illinois, and Washington state—a crowded slate of congressional primaries still to come on June 23.

In the 15th Congressional District in the Bronx, so many Democrats are running to replace the retiring Rep. José Serrano they could field a baseball team. Last week, one of those candidates, City Council member Ritchie Torres, announced he had tested positive for the virus and would be spending two weeks in isolation. Another candidate, Samelys Lopez, a community organizer who has been endorsed by Rep. Alexandria Ocasio-Cortez, told me she was “basically using our campaign at this moment as a conduit for public service.”

When the month started, Lopez’s volunteers were talking to voters at subway stops and door-knocking every day. She’d started looking for a permanent campaign office. But Lopez sent her team a few days before Gov. Andrew Cuomo suspended petition-gathering in the state. (He’s since reduced the number of signatures needed.) Since then, she and her staff have spent the days since calling up volunteers and voters to check in and focusing on “mutual aid” in their neighborhoods. Right now, her campaign office is her apartment.

A few miles up the road, in the 16th District, Jamaal Bowman, a public school principal from Yonkers who is challenging Democratic Rep. Eliot Engel in the primary, was going for a walk with his kids, multitasking his campaign work with child care. In-person campaigning had shut down early for him too; the state put another city in the district, New Rochelle, on lockdown a few days earlier. He knew the writing was on the wall when he’d try to talk to voters. “I was going up to people and they weren’t really comfortable talking,” he said. That night, he was logging in to a chat session on Zoom with a dozen or so members of the Sunrise Movement, the youth-driven climate action group.

When I spoke with Scholten last week, he was still figuring out what to do next. He’d held his last public event on March 11 after turning in his nominating papers to the Iowa secretary of state and was planning his first virtual town hall. He’d lined up an Iowa epidemiologist and a former US senator from the farm belt, Heidi Heitkamp of North Dakota, to answer questions on health and policy. In an aging district, making such events accessible presents a new set of challenges. Scholten settled on using Google Hangouts for now—”Zoom you have to download, and that will probably turn off a lot of people there,” he said.

Scholten’s campaign had previously placed a premium on meeting voters where they are, in intimate town halls held in small farm towns. He told supporters that if 70 percent of voters either met him personally; saw his RV, “Sioux City Sue”; or had an opportunity to attend an event within a mile of their home, he’d win. For now, Iowans can’t do any of those things. But those interactions weren’t just his preferred way of reaching voters; it also shaped his messaging. “This is the time farmers are meeting with their bankers, and so I really wanted to get out there and hear what’s on the ground,” he said.

If there was a silver lining, it was a logistical one. With “Sioux City Sue” sidelined with exhaust issues over the winter, he’d run his own car into the ground too.

“Now is a good time to get it fixed,” he said. “I was gonna make a few phone calls today.”