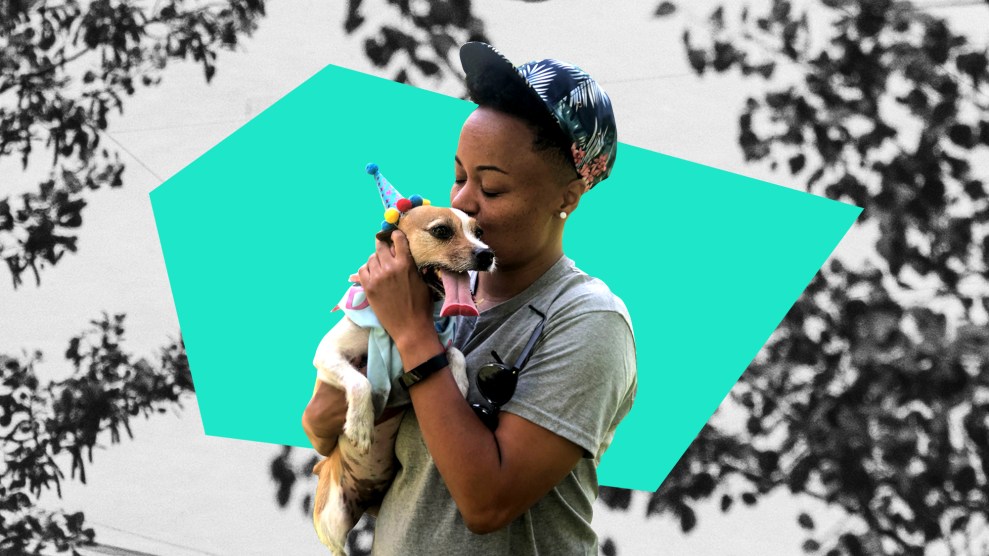 Not only does Zora have coats, she's got birthday swag.Mother Jones illustration

It was the least casual thing I’d done in a while and, for better or worse, not one I’ll probably do again.

Just a few weeks ago, terrified by a recent experience in which my scared dog ran into the street, I enlisted the help of a professional dog whisperer. His name is Anthony, and he came highly recommended. “He moves like a dog,” I’d been told, and sure enough, there he was on the floor of my apartment, coaxing my 5-year-old Jack Russell terrier, Zora, into something called a safety collar with a series of physical undulations and verbal cues, then whisking her down the five flights of stairs of my Brooklyn building. We were on our way to the dog run for a few lessons in socialization.

The closest park to me is one of my favorite places. It’s where where we walk every morning to meet up with our crew of dogs and their humans. The thing that makes this place so special? It’s Black. Very Black.

Except there are no enclosed dog runs (or “official” dog parks) in my neighborhood, a fact that has never bothered me before. I live in Crown Heights, on the border of Brownsville. Deep enough for gentrification to produce the occasional white neighbor, but also deep enough that nearly every single business is an immigrant-owned establishment. The closest park to me sits right on a busy street, and it’s one of my favorite places. It’s where Zora learned how to play fetch, and it’s where we walk every morning to meet up with our crew of dogs and their humans. The thing that makes this place so special? It’s Black. Very Black. There’s Miss Vicky, the retired city worker, who shows up every morning between 8 and 9 with her two dogs, Snickers and Biscuit. (Miss Vicky is the only human’s name I know, because in Doglandia, the dogs are the only ones who matter.) There’s Queenie, an energetic pitfall mix who never misses a chance to steal Zora’s ball. There’s Sundae, whose owner found her abandoned in that very park on a Sunday. There’s Missy, the Maltese mix who sadly had to miss Zora’s most recent birthday due to a bad bout of kennel cough. Ivana, the 18-year-old schnauzer, rocks a mean red neckerchief. Chloe’s human loves her pink Adidog hoodie, but would honestly prefer it in yellow. We don’t see every dog every time, but every so often, when we’re lucky, maybe five of us are in the park with our pups all at once. Everyone is friendly. And we all spoil our pets.

But Anthony insisted that we needed a place with more than a few dogs. So we walked.

The particular dog park where we landed was like so many I’d been to in the past. It was about a 20 minute walk from my home, nestled between the arch of public housing buildings and artisanal bread shops. It wasn’t a dog park per se, meaning there was no enclosed dog run, but there was a large dirt field where dogs were allowed to run around off leash before 9 am on weekdays. Anthony led Zora and I in a series of exercises, meant to take Zora—my anxious baby who is nevertheless perfect—“to and through” the pack of 15 or so other dogs.

Left to her own devices, Zora stood shaking in the middle of it all, ears glued to the sides of head, eyes furrowed in a look that said, Do I have to? But with Anthony leading the way, she started to pick up a little confidence. She sniffed a few butts. Earned a few strangers’ treats. She was unsteady, but, as Anthony told me, my job was to help her face her fears. Lead her to them and show her through them. If she skitters past the loud bang of sidewalk construction, walk her calmly past it a few times to show her that the jack hammer isn’t an imminent threat. Earn her trust.

I learned a lot over the course of the next hour. I learned that playing fetch with my dog every morning actually does her more harm than good, because she’s not socializing with other animals. I learned that she’ll stop ignoring my commands when I start mixing them up a bit, signaling that “come” doesn’t mean the end of fun time. I learned that harnesses encourage dogs to lead their humans, and that a dog like mine, who craves accountability and structure, wants to be led and should just wear a collar. “She loves you,” Anthony told me in his most gentle way possible. “But she doesn’t trust you to keep her or yourself alive.” (Harsh? Yes. Useful? Definitely.)

One critical lesson, though, didn’t come from Anthony. It came from a complete stranger who reminded me why I hate most dog parks: They’re so unbearably, unapologetically white.

In the middle of Anthony helping me put a finer touch on one of my commands, a woman approached. You know the type. Maybe you are the type. She was a white woman who’d come to the park that morning, toting her dog and lots of good intentions. Let’s call her Dog Park Debbie.

She spoke softly and slowly, as if I might have trouble understanding. And then, the final insult: Did my dog have a coat? I should really get her a coat. It’s Brooklyn and it’s cold.

Even though Anthony, who is white, stood by my side, Dog Park Debbie directed her attention toward me. What I was doing, she said, was all wrong. She demonstrated her preferred way to do all the things. She spoke softly and slowly, as if I might have trouble understanding. And then, the final insult: Did my dog have a coat? I should really get her a coat. It’s Brooklyn and it’s cold.

After what felt like way too long, Anthony and I politely walked away from the woman, him fuming at someone so fearlessly questioning his expertise. But I couldn’t get past the coat. Does my dog have a coat? Why, yes. In fact, she has several. She has seasonal attire. It matches. Accentuates her eyes. She has looks—lewks!—that I replenish often, and as a thirysomething divorced lesbian who spends about 90 percent of my disposable income on my dog, I am not ashamed. In fact, I come from a family that has long loved and doted on any number of pets, including cats, dogs, guinea pigs, hamsters, and once, oddly, a monkey. We love our littles. And we’re not new to this.

We’re also, unfortunately, not new to Dog Park Debbies. I had largely pushed them from my mind, but they are common. Sometimes they’re loud and vocal. Sometimes they’re quiet and suspicious, side-eyeing you when your dog shows the slightest growl. They have Lots of Opinions about what you’re doing wrong. Or sometimes they have no opinions whatsoever, and try very hard to not be around you and your dog at all. They make the meaningless and surprisingly refreshing dog park banter—What’s your dog’s name? How old? Is she nice?—suddenly charged.

As I left the dog park that day, I looked around to see if there were any other Black people there with dogs. There was one. We nodded, that silent acknowledgement Black people give one another that says, I see you, good morning, or, more often, Do you believe this shit? Informally, I started asking friends of mine with dogs if they went to dog parks. Two were Black, one was Puerto Rican. Every single person said they just didn’t feel comfortable. It was always too white.

As I wrapped up my session with Anthony that day, he reassuringly told me that if I took Zora to that dog park every morning, within a week she’d be more social. He wanted to see her stealing other dogs’ balls and wrestling with them to the ground. My fear was creeping into her, he said. And that was true. Maybe she could use a good hour every morning at a park filled with these dogs. But I’m not sure I could.