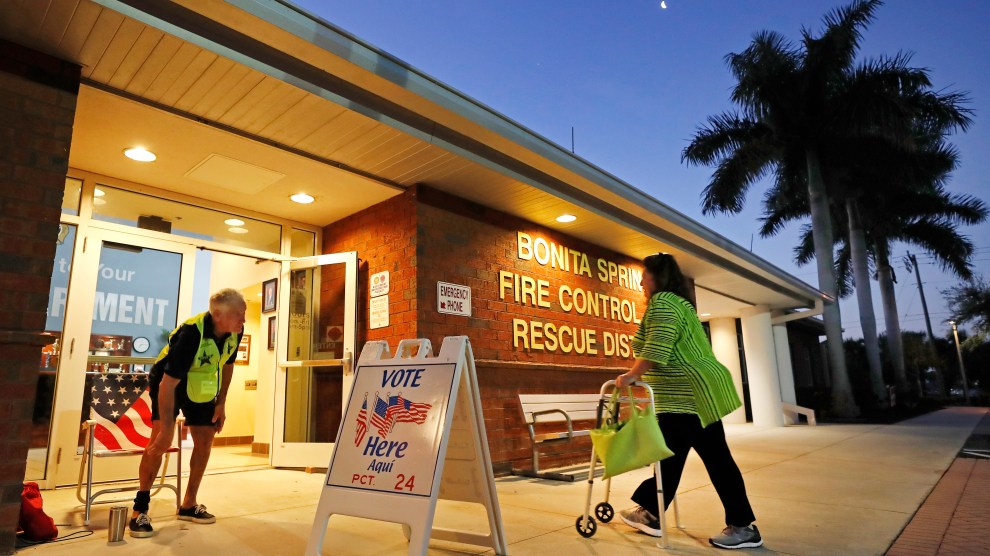 A voter walks into a polling station for the Florida presidential primary, which is on Tuesday.Elise Amendola/AP

Jeff Gruver couldn’t wait to cast a ballot in Florida’s primary election. At age 33, he’d never voted in a primary before. But it wasn’t for lack of interest—he had a felony record for old drug charges, and until recently, this was grounds to disqualify him from voting in Florida for the rest of his life.

That changed when the state’s citizens passed a historic ballot measure in 2018 that reenfranchised people with most felony records. It was the largest restoration of voting rights in decades, affecting up to 1.4 million people, many of them African American. As a result of the change, Gruver went to a polling station this month to cast his vote early, ahead of the state’s primary today, which is still on despite the coronavirus outbreak. (Ohio’s primary was postponed because of the public health emergency.) “It was amazing,” he says. “I’m really plugged in to local politics here.”

But as great as it felt to vote, Gruver’s not sure he’ll be allowed to participate in the November election, or any election after that—thanks to a recent state law that bars at least 750,000 former felons from the polls if they haven’t finished paying off financial debts from their time in the criminal justice system. After his conviction for cocaine possession in 2008, he owed $801—a fee for his attorney and indigent application, court costs, and a fine—but that amount has since ballooned to more than $2,000 due to late fees under the debt collection agency. As he lives from paycheck to paycheck as a social worker who runs a homeless shelter in Gainesville, he says he can’t erase the debt while also covering his rent on top of student loans and car payments.

He was able to vote in this primary election only because he’s a plaintiff in a federal lawsuit filed by the ACLU to challenge the new state law. What about the other hundreds of thousands of people in Florida who aren’t part of the lawsuit but also have felony records and unpaid fines and fees? Because of widespread confusion over the new law and the federal lawsuit, many of them are staying home from the polls today, unsure if they’re allowed to vote. Even some election officials aren’t certain who can and can’t legally cast a ballot. It’s “an absolute mess where people can’t determine their eligibility,” says Julie Ebenstein, the lead ACLU attorney on the lawsuit. “They are left in limbo—they can’t get a straight answer.”

“They are left in limbo—they can’t get a straight answer.”

The lawsuit argues that it’s unconstitutional to disenfranchise people with felony records just because they’re too poor to pay their debts. The suit argues that since it’s illegal to enact poll taxes—voting fees that were levied in the 19th and early 20th centuries to block African Americans from the polls—a person’s debt from court fees similarly should not prevent someone from voting. A second plaintiff owes $59 million in restitution; others owe hundreds or thousands of dollars.

Last October, a federal judge decided that Gruver and 16 other plaintiffs could register to vote for today’s primary while their case continued to work its way through the court. (The ruling was temporary, lasting only until the trial begins next month.) US District Judge Robert Hinkle argued it was unconstitutional to bar someone from the rolls simply because they were too poor to pay back a court debt. Ebenstein says this finding of unconstitutionality theoretically applies more broadly to other felons in the state who can’t afford to erase their debts, not just the plaintiffs in the lawsuit.

But it’s unclear if the state’s election officials agree. In Leon County, home to Tallahassee, officials said no felons with unpaid fines and fees could participate in the primary, other than the 17 plaintiffs. “They shouldn’t be registering to vote at this time,” Chris Moore, the county’s deputy supervisor of elections, told me. In Duval County, home to Jacksonville, the state’s biggest city, officials were less sure, citing the ongoing lawsuit. “For me, it’s uncertain,” Danaë Rivera-Marasco, a spokesperson at the local elections office, said when I asked if people who owed fines could vote. She recommended I reach out to Florida’s Department of State for answers. A spokesperson for department promised to get back to me when I asked for clarification about the rules and then never did. Other county election officials did not return my calls.

Florida does not have a centralized database that aggregates who owes court fines and fees.

Making matters even more confusing is the fact that Florida makes it extremely difficult to figure out exactly who owes court fines and fees, and how much they owe. The state does not have a centralized database that aggregates this information, which means people who committed crimes in different counties must reach out to multiple agencies. And some jurisdictions don’t keep records from before the 1990s; one plaintiff in the lawsuit, with a conviction from the 1970s, has tried unsuccessfully for months to determine how big her debt is.

In a recent study, Traci Burch, an associate professor of political science at Northwestern University, struggled to figure out how much a group of Florida felons owed. The records from the Florida Department of Law Enforcement often listed amounts of debt for one person that were different from records from court clerks. When her team of researchers tried to call the clerks for more information, sometimes nobody answered. Some offices were open just three hours per day. Some clerks charged access to documents. Others simply declined to help. “The process,” Burch wrote, “is expensive, time consuming, and ultimately, discouraging for people who want to vote.”

The confusion is enough to keep many people home, because they might be worried about the risks of being prosecuted for voter fraud if they incorrectly register or try to vote. In Florida, submitting false information on a voter registration form is a felony punishable with up to five years in prison and a $5,000 fine. “You just can’t go down there and register with a felony,” Gary Daughtry, a 66-year-old with debt from an old grand theft felony, told the Appeal while debating whether to participate in this year’s primary. “I’m not going to put myself back in the same situation. I’m trying to correct the situation, not make it worse.”

“The lack of clarity is going to have an extraordinary chilling effect on many voters.”

Without more clear guidelines on the rules around voting, the ACLU’s Ebenstein says many people won’t take the chance of casting a ballot. “Especially for folks who have a history in the criminal justice system and are trying to do right at this point, it’s really an unreasonable risk to ask people to take,” she says. “The lack of clarity is going to have an extraordinary chilling effect on many voters.”