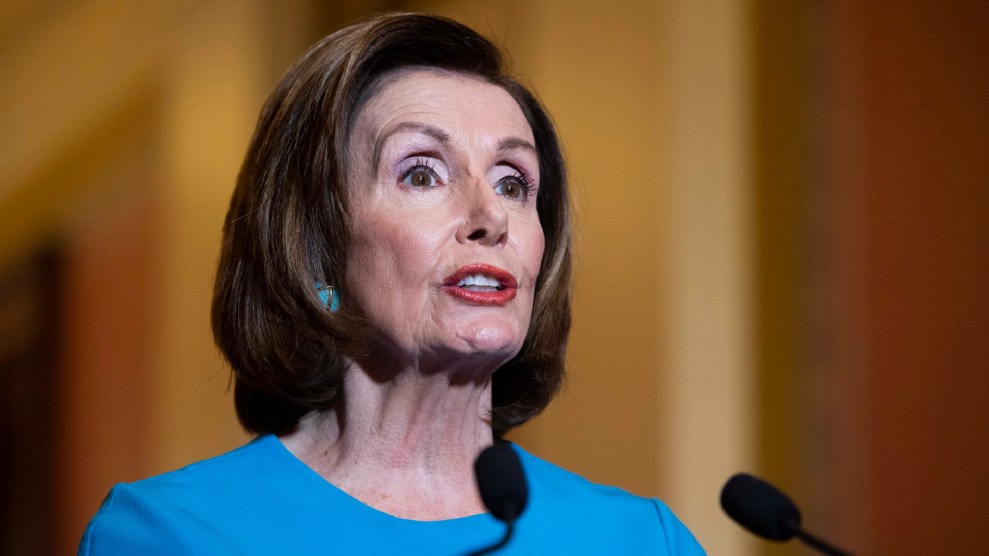 As stock markets plummet businesses, prepare for staff to work from home, and confirmed cases and deaths from the novel coronavirus continue to grow, House Speaker Nancy Pelosi (D-Calif) announced that the House plans to vote on a bill Friday to address the inevitable hardships that will result from the pandemic. But discussions with Republican leadership for the multi-billion dollar aid package may have stalled on Thursday over funding for abortion.

According to reporting from Bloomberg News and NBC, Republican lawmakers are demanding that any new funding to combat COVID-19 include the anti-abortion Hyde Amendment.

“Right now we are hearing that some of the fights and some of the gridlock is because people are trying to put pro-life provisions into this,” said Rep. Alexandria Ocasio-Cortez (D-NY) in an interview with Fox News on Thursday night. “We can have that debate another time.”

Congress passed the Hyde Amendment in 1976 following the landmark 1973 abortion case Roe v. Wade, as a way of limiting access to abortion in lieu of being able to ban it altogether. Named after Rep. Henry Hyde (R-Ill.) it forbids federal funding of abortions, which has made it impossible for low income women to receive Medicaid coverage to terminate pregnancies. Because it is an appropriations rider, it has to be renewed every budget cycle. In the 2020 presidential primary campaign former Vice President Joe Biden was criticized by reproductive rights activists after he refused to say he would push to get rid of it as president; he since has reversed his position and said he would support repealing it.

Conservative lawmakers have argued that by not including the Hyde Amendment in the coronavirus spending package, Democrats are trying to invalidate current federal spending bans on abortion and allow this new funding to pay for abortion services. However, Kelsey Ryland, director of federal strategies for All Above All, an organization focused on dismantling Hyde and expanding access to abortion, explains that simply isn’t how getting rid of Hyde would work. “I wish it was that easy. It’s a little mind-boggling to me,” Ryland says adding, “I have a hard time seeing how this bill would undue FY2020 appropriations bills that already passed.”

Making the Hyde Amendment a point of contention in a spending bill that included making testing more available, and letting workers take time off if they’re sick, seemed to be particularly poor timing. As of Thursday, the number of people in the United States with coronavirus has surpassed 1,300, in 44 states and Washington, DC, with at least 38 people reported dead as a result. 30 governors have declared states of emergencies, and, on Wednesday, the World Health Organization announced that the virus had reached pandemic levels.

On Thursday, President Trump said he wouldn’t support a Democratic spending package that includes increased spending on food assistance and unemployment insurance, paid sick leave, and expanding the availability of testing. Trump called the measures “goodies [Democrats] haven’t been able to get for the last 25 years.” Since Pelosi’s announcement that the House plans to vote on the bill on Friday, there has been no word on whether the White House plans to back the legislation. However, according to Pelosi’s aides, she spoke with White House Treasury Secretary Steven Mnuchin 20 minutes before delivering an update on the status of the spending bill in which she said the House planned to vote on the bill Friday.

Democrats have argued that these policy changes are vital emergency measures to need to protect people in the United States from coronavirus and ensure that the virus doesn’t bankrupt everyday Americans, who are now being asked to adjust to a very different world.

President Trump, who has repeated a series of false and misleading statements about the novel coronavirus—including  that anyone who wants to get tested can be despite widespread reports of symptomatic individuals being unable to access a test—has done little encourage confidence in his response to the crisis. In his speech to the nation on Wednesday night, the president told the public that he planned “to unleash the full power of the federal government,” on combatting the coronavirus. But as he and other Republicans have criticized Democrats for politicizing the response, their efforts to stall an essential aid package over a controversial 44-year old budget rider may tell a different story.