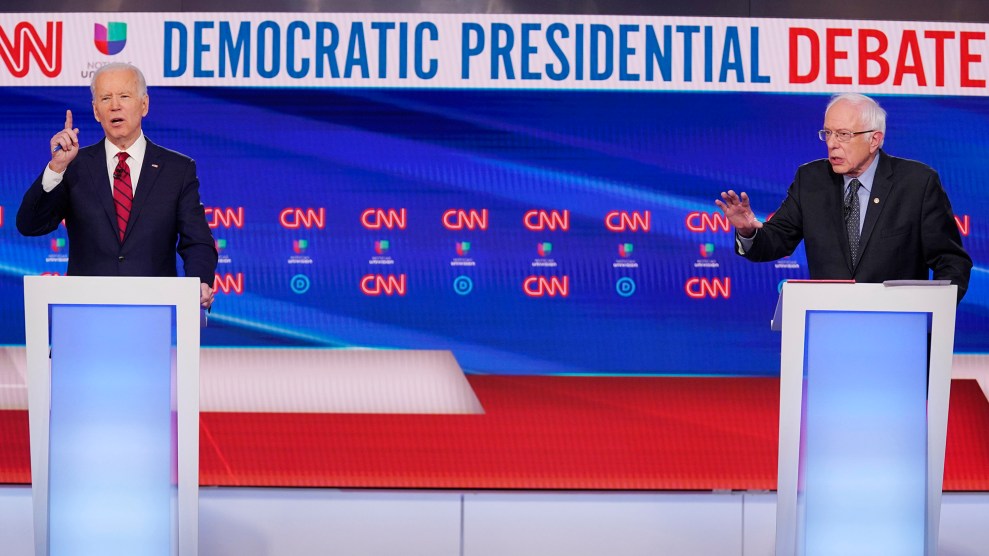 From the onset of Sunday night’s Democratic debate between Joe Biden and Bernie Sanders, the candidates’ plans for addressing the coronavirus pandemic became the perfect microcosms of the broader themes of their two campaigns. Biden called for tackling the crisis at hand, while Sanders emphasized that the crisis exposes the flaws in America’s health care and economic systems.

“People are looking for results, not a revolution,” Biden said, arguing that systemic changes should wait until the pandemic was defeated. “That has nothing to do with the legitimate concern about income inequality in America. That’s real,” he said. “But that does not affect the need for us to act swiftly and very thoroughly and in concert with all the forces that we need to bring to bear to deal with the crisis now.” Biden proposed using the resources of the military to build up the capacity of the health care system as well as ensuring an economic response to make sure people do not lose their homes or undergo increased financial hardship as a result of the pandemic.

“People are looking for results, not a revolution,” Biden said,

Sanders called for a vigorous response to the coronavirus, but also argued that the crisis would be managed better if the country had a single-payer health care system. “It is not good enough not to be understanding how we got here and where we want to go into the future,” he said. As it stands, he pointed out, people who should go get a test or see a doctor instead stay home to avoid the medical bills.

This has been Sanders’ message on the crisis this past week, as my colleague Tim Murphy wrote on Friday:

The coronavirus crisis, he argued, had laid bare the larger failures of the American system itself—its lack of a social safety net for working people, its privatized health care networks, and a trade and manufacturing policy that had outsourced the production of necessary supplies to other countries for the sake of corporate profits. In other words, for Sanders there’s no normal to go back to.

Biden, by contrast, has run a campaign all about going back to normal. Not back to Trump’s “make America great again” dogwhistle, but to the more stable leadership of the Obama administration. That message was on full display Sunday, as Biden repeatedly recalled the previous administration’s response to the Ebola and H1N1 outbreaks.

Only once things are back to normal, Biden said, would his administration consider pushing for bigger changes. He supports a public health care option, but does not think it should be the only option. “With all due respect to Medicare for All,” he said, “you have a single payer system in Italy,” where the coronavirus has spread rapidly in recent weeks. “It doesn’t work there. It has nothing to do with Medicare for All. That would not solve the problem at all.”

But when it came to how Biden and Sanders are protecting themselves from the spread of the coronavirus, there was plenty of agreement. Their campaigns’ staff are working remotely, their rallies are now online events, neither are shaking hands anymore, and they both reassured audiences that they are using plenty of soap.