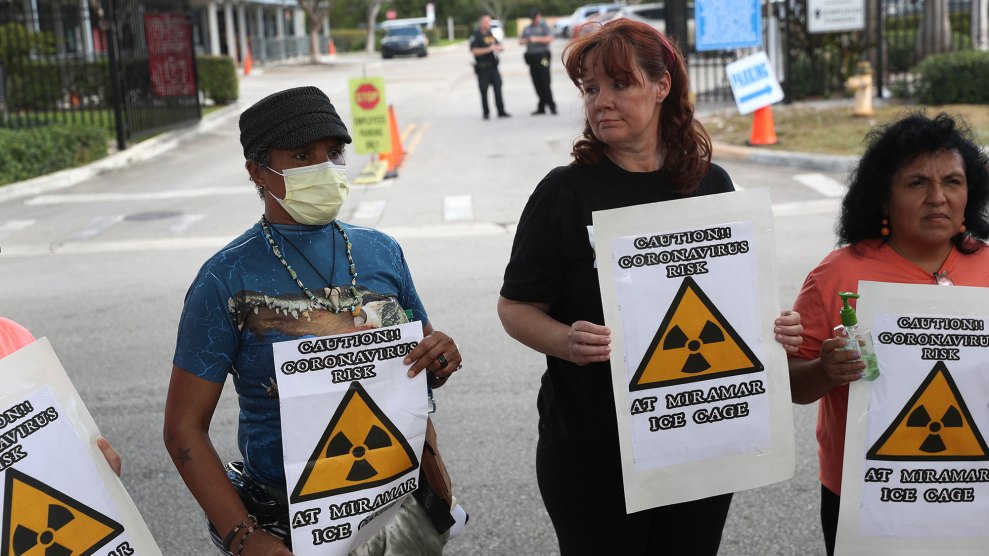 Protestors hold signs as they join others outside an Immigration and Customs Enforcement office in Florida last month.Joe Raedle/Getty Images

On its website, the Centers for Disease Control and Prevention provides some commonsense guidelines for prisons and detention centers to curb the spread of COVID-19. These facilities, the CDC says, should avoid “cohorting” people who have been in contact with someone infected with the virus—that is, quarantining them together. The reasons are obvious. Doing so can “transmit COVID-19 from those who are infected to those who are uninfected.”

Yet Immigration and Customs Enforcement, which detains immigrants and asylum seekers in facilities across the country, is following a rulebook directly at odds with the CDC’s advice. ICE is relying heavily on cohorting because it refuses to release large numbers of people, despite admitting that it often lacks the ability to separate detainees it knows have been exposed to the new coronavirus.

ICE usually houses detainees in dorms where dozens of people are held together in close quarters. Under ICE’s COVID-19 policy, symptomatic detainees are removed and placed in isolation. When someone tests positive, the rest of the dorm is quarantined together, or “cohorted,” for 14 days. From there, detention center staff monitor to see if anyone else develops symptoms. Meanwhile, the quarantined detainees are in close proximity and touching the same surfaces—often without adequate access to soap, cleaning supplies, masks, and gloves. If another person gets infected, that individual is isolated and the quarantine clock resets. The process, under ICE guidelines, continues until nobody is symptomatic for two weeks.

The CDC stresses that detention centers “should make every possible effort” to avoid such scenarios. Its website states, “Cohorting should only be practiced if there are no other available options.” And ICE does have other options. As we’ve reported, the agency has broad authority to let people out of detention. (As of July, only one-in-10 ICE detainees had what the agency considered to be a serious criminal conviction; nearly 60 percent of people detained earlier this month had no criminal convictions at all.)

While ICE says it will avoid group quarantines when individual cells are available, a spokesperson, who requested anonymity, made clear that detention centers “often do not have single rooms available for each detainee.” Even when there are single cells, a second ICE spokesperson, Bryan Cox, said that people in quarantine will still share common areas.

We asked three infectious diseases experts to weigh in on ICE’s coronavirus policy. Each found serious fault with how the agency was responding to the outbreak within its facilities.

Over Zoom, Dr. Chris Beyrer, the Desmond M. Tutu Professor of Public Health and Human Rights at Johns Hopkins University, raised a principle named after another South African champion of civil rights. The Nelson Mandela Rules, adopted by the United Nations in 2015, require that people in detention have access to the same quality of health care as the surrounding community. He applied the Mandela principle to ICE’s group quarantines.

“Are people being provided that minimum standard of public health protection, which we have asked all Americans who have to liberty to embrace as a way to control this virus?” Beyrer asked. “I would say the answer is a clear no.”

Then he got to the science. Beyrer said the average person with COVID-19 infects roughly three people, but in crowded settings such as ICE detention centers that number would likely be higher. “It can’t be lower,” he noted.

Dr. Carlos Franco-Paredes, a professor in the University of Colorado School of Medicine’s infectious diseases division, emphasized that crowded, enclosed spaces are the opposite of social distancing. By the time ICE quarantines a symptomatic detainee, that person will have likely have already infected others, he said. Those infected people will transmit the virus to others.

ICE’s policy is likely to create a chain of infections. It is also likely to evoke terror among quarantined detainees forced to watch as the virus spreads among them. This is not an abstraction. Infections are mounting within ICE custody. As of Monday morning, there were at least 91 detainees or ICE detention center employees who have tested positive, up from 40 last Tuesday. (The real number is higher because the agency doesn’t report when people employed by the private prison companies that run many of its detention centers test positive.)

As a contract employee of the Department of Homeland Security’s Office of Civil Rights and Civil Liberties, Dr. Josiah Rich, a professor of medicine and epidemiology at Brown University, is particularly qualified to assess ICE’s COVID-19 response. Rich and Dr. Scott Allen, an expert medical adviser for Physicians for Human Rights and fellow DHS contract employee, came forward as whistleblowers last month, warning in a letter to Congress of a “tinderbox scenario” if the new coronavirus started spreading in immigration detention centers. (Rich spoke to us in his capacity as a whistleblower being represented by the Government Accountability Project; not on behalf of DHS.)

ICE’s group quarantine approach is similar to what happened on the Diamond Princess cruise ship, Rich said. In that case, passengers were removed from the ship as they got sick. More than 700 out of 3,711 people onboard ended up becoming infected with COVID-19. Nine had died as of late March.

Rich contrasted that with an Italian town where mass testing quickly halted an outbreak. When testing began in early March, at least 90 out of 3,300 residents were infected. Testing everyone led to the isolation of six people who were infected but asymptomatic. Without the testing, those individuals would have likely kept spreading the virus.

A detainee at ICE’s Pine Prairie detention center said in an interview that new people were brought in from LaSalle Correctional after the confirmed infection. The new arrivals, he said, were being held apart from his unit as part of a roughly 70-person group quarantine. On their way to Pine Prairie, he added, the LaSalle detainees now under quarantine passed through ICE’s Alexandria Staging Facility, a coronavirus hot spot where at least eleven ICE employees have tested positive. (Cox would neither confirm nor deny that detainees exposed at LaSalle were sent to Pine Prairie, citing unspecified “operational security” concerns.)

At San Diego’s Otay Mesa Detention Center, at least 12 detainees and five CoreCivic employees have tested positive. Multiple housing units are under lockdown, according to Dorien Ediger-Seto, a senior attorney with the National Immigrant Justice Center. “That is an absolutely inadequate response,” she said. “It’s saying that the 70 people who were in that pod are fair game for the virus….Just letting large groups of people contract COVID-19 can’t be the solution.”

Margaret Cargioli, an attorney with Immigrant Defenders Law Center, said on a call with reporters on Thursday that the question shouldn’t be how many people ICE can release or should release, but rather “Who in ICE custody should be subjected to death? And the answer is no one.”

For the past month, public health experts, activists, and lawyers have called on ICE to release people who are not a threat to public safety, but the agency has largely refused to do so. When human rights groups have sued for the release of small numbers of at-risk detainees, the Justice Department has fought to keep those people in detention. Some detainees with medical conditions have been allowed out, but release remains the exception.

For Beyrer, it’s essential that the public understand that most ICE detainees could be released without threatening public safety. In criticizing ICE’s coronavirus response, he described in stark terms the conditions for people forced to remain in group quarantines. “Cruel and usual punishment,” he said. “That level of anxiety, that level of stress…It’s a form of torture, you might say. A new form of torture. You could call it COVID-19 torture.”