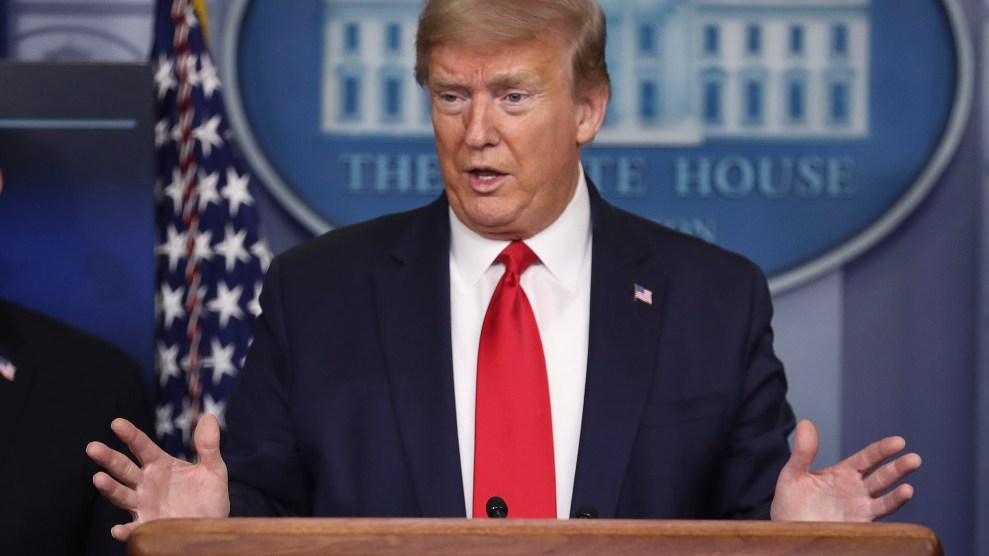 It’s only mid-April (yes, I had to check) and President Donald Trump is already accusing Democrats of “trying to steal the election out from under [him].” Here’s an email Trump’s re-election campaign sent out to supporters Friday afternoon:

You knew this was coming. Five months from the voting, @realDonaldTrump is explicitly accusing the Democrats of trying to steal the election from him. He will ramp this up so that by Election Day his supporters will not believe any result other than his reelection is legitimate. pic.twitter.com/oxF2YalIgm

As with many Trump statements, it’s a futile and counterproductive exercise to try to debunk it in full, but he (okay, his campaign’s digital fundraising staffer) is referring to a push, mainly by Democrats, to expand absentee voting access before the fall. In case you haven’t heard, there’s a global pandemic that’s shut down life as we know it in the United States, and turned the act of in-person-voting—or working at a voting precinct—into a life-threatening proposition. Wouldn’t it be nice to vote without dying? And some states, such as California, Oregon, and Washington, already make it possible for anyone to cast their vote by mail—in fact they’ve been doing it a long time with no real issues or fraud. (Incidentally, there was a big case of absentee-ballot fraud in 2018—which ended in a do-over election and the indictment of a Republican campaign worker.)

Trump’s full of bluster, but let’s not lose sight how insane this is. The sitting president is accusing his opponents of “trying to steal” the election simply because they want to make sure people are able to vote safely in a pandemic—and he’s doing it just to raise money. At least it’s going to a good place.