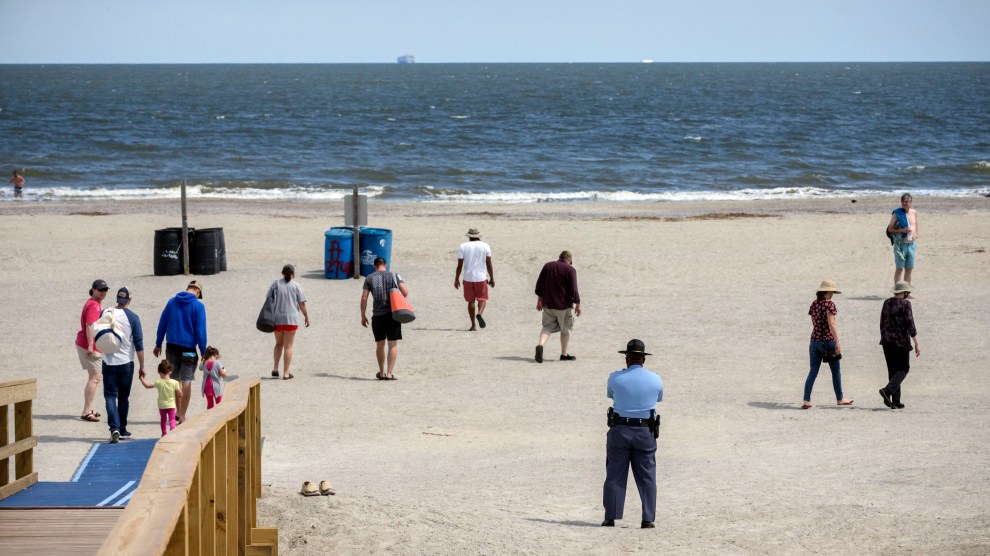 Late last week, my Georgia friends and I rejoiced: Our governor, Brian Kemp, had finally issued a statewide shelter-in-place order to slow the spread of the coronavirus.

It was about time: A terrifying New York Times map showed that people in the Southeast hadn’t been staying home. Atlanta’s hospitals are now preparing for a “super surge” of COVID-19 patients. In Albany, a small city about 3 hours southwest of Atlanta, a single funeral spread the virus to more than 500 people. The local hospital has a total of 14 ICU beds.

At the press conference where he unveiled the order, Kemp said what all of us had been hoping he would finally say: Georgia can “win this war by hunkering down.”

But our relief was short-lived. On Friday night, just as the shelter-in-place was to take effect, the Atlanta Journal Constitution reported that under Kemp’s order, Georgia’s beaches, which had been closed by mayors in the coastal cities, had reopened. The statewide shelter-in-place mandated that beaches open for people seeking exercise—and the order superseded the local ordinances.

“Kemp’s Shelter-in-Place order, by virtue of how it nullifies all local emergency ordinances, is clearly an attempt to walk back more stringent and conflicting local orders.”

Like clockwork, on Saturday morning, the Savannah Morning News reported that beaches in the town of Tybee Island were filling up. Photos accompanying the piece showed people playing games on the beach, groups of a dozen or so people wading in the water, and crowds on the boardwalk. Saturday evening, the paper reported, a Tybee Island police officer tested positive for COVID-19.

Local leaders were livid. Later on Saturday, Tybee Island mayor Shirley Sessions closed beach parking lots and access points. Those small steps were all that the governor’s order allowed. Kemp, she told the Savannah Morning News, “holds all the cards. We hold none.”

The news about Georgia’s beaches reopening went national. But it wasn’t just Georgia’s coastal leaders who felt undermined by the loopholes in Kemp’s shelter-in-place. Late Friday evening, I got an email from Georgia state senator Sally Harrell, a Democrat who represents the suburbs just north of Atlanta in Georgia’s senate district 40. Georgia mayors, she told me, were dismayed to find that Kemp’s order undid the local social-distancing measures that they had worked hard to put in place. They learned, for example, that Kemp’s order prohibited local police from breaking up gatherings of more than 10 people.

On Saturday afternoon, I spoke with Stephe Koontz, a member of the city council of the suburb of Doraville. Kemp’s order, she said, “kind of threw our community into chaos. There’s been a lot of mixed messages because people are saying, ‘Well, I read the governor’s order and we know police can’t do anything right now, so we’re going to go ahead and have a party.’”

Koontz pointed out that most of the time, in Georgia, statewide laws are meant to serve as a baseline—if local communities want to make stricter rules, they’re free to do so. But Kemp’s shelter-in-place, said Koontz, is different: It forbids local leaders from enacting stricter social distancing laws. “In Georgia, usually the state law becomes the floor of the regulation, and in most cases the cities are allowed to be more restrictive,” she said. “But that’s not what he did.”

Sen. Harrell believes that Kemp’s shelter-in-place is a sneaky way of relaxing what the governor sees as local overreach. “Governor Kemp was very clear in delaying his own action, that he wanted local communities to take the lead—and they did,” she wrote to me in an email. “Then he came along and undid what they had done.” She added: “Kemp’s Shelter-in-Place order, by virtue of how it nullifies all local emergency ordinances, is clearly an attempt to walk back more stringent and conflicting local orders.”

Indeed, before Kemp announced his shelter-in-place, his office criticized local leaders’ social-distancing rules. Last week, Tim Fleming, Kemp’s chief of staff, wrote in a now-deleted Facebook post, “The media and some in the medical profession are peddling these doomsday models and projections. This has in turn resulted in people panicking and local governments across our state overreacting. As a result of their overreach, many small business will struggle, and some will not reopen.”

Koontz, too, said she wondered about Kemp’s motives. “It almost feels like what came down from the governor was a partisan move,” she said. “This feels like it might have been a middle finger to metro Atlanta’s stricter ordinances.”

Indeed. In my Atlanta neighborhood, I walk my kids past our neighborhood park most days. My four-year-old now knows that we can’t go play—“the playground is closed,” he says. Since Atlanta mayor Keisha Lance Bottoms issued her stay-at-home order for the city of Atlanta a little more than two weeks ago, the park has been relatively empty. But on Sunday, I noticed a group of teenagers chasing each other around on the playground equipment. I hustled my son in the opposite direction, so I wouldn’t have to explain to him that no one was going to make them leave.