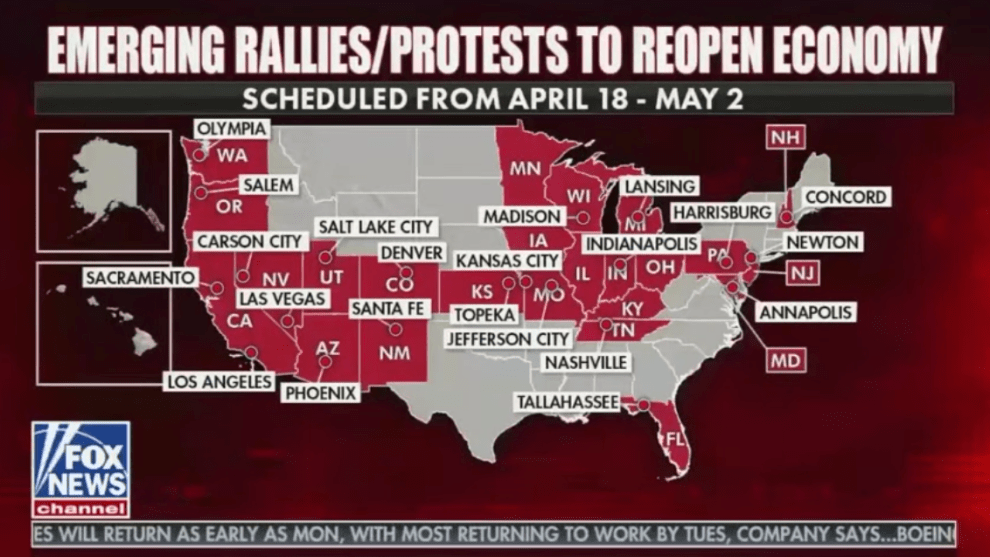 In recent days, thousands of people have protested against coronavirus lockdowns in states across the country. The demonstrators—often wearing MAGA gear and directing their ire at Democratic governors—still represent a small minority; polls show that most Americans are actually worried the shutdowns will be ended too soon. But according to Matt Gertz, that could change quickly. Gertz, a senior fellow at the liberal group Media Matters for America, points out that Fox News has thrown its full weight behind the protests and that Donald Trump has followed the right-wing network’s lead. “Once you have Fox News and President Trump championing these protests for a while,” Gertz predicts, “you’ll see polarization kick in, I think, and Republicans begin to support them in larger numbers.”

Between April 13 and April 19, Fox devoted a whopping 4 hours and 23 minutes—across 69 separate segments—to covering the protests, a Media Matters report found. All this is eerily reminiscent of 2009, when Fox helped turn the nascent tea party movement into a powerful anti-Obama political force by relentlessly promoting its rallies. (Disclosure: I worked with Gertz at Media Matters back then.) On Monday, I spoke with Gertz about Fox’s coverage of the anti-social distancing demonstrations, its impact on Trump, and the striking similarities to what happened a decade ago. Our conversation has been condensed and edited for clarity.

Describe how Fox has been promoting these protests against governors and against social distancing.

Beginning a little bit last Tuesday and then picking up rather heavily on Wednesday through the end of last week and Monday, we’ve seen steady promotion of protests across the country on Fox, frequent packaged reports, as well as lots of pundit chatter about the protests. Of course, because it’s Fox News, it’s all heavily inflected with comments in support of the protests, in praise of what they’re doing and what they represent, in hopes that they spread further across the country. On Wednesday, we tabulated a dozen segments that Fox ran discussing the protests. That was the day of the Lansing, Michigan, protest, which gave the story a bit more attention nationally.

A lot of the highest-profile protests have been targeted at Democratic governors. Has Fox been saying much about the Republican governors who have taken pretty aggressive action to fight coronavirus?

Certainly not to the same degree that they have talked about the Democratic ones. Michigan, in particular, has been the big fixation of the network throughout this period. They’ve been furiously attacking Michigan Gov. Gretchen Whitmer (D), weighing in on the side of the protesters there.

You’ve drawn parallels between Fox’s embrace of these protests and the network’s promotion of the tea party rallies in 2009. Can you talk a little bit more about the similarities?

What happened with the tea party protests is you had a situation where the Republican Party’s brand had been horribly damaged in the wake of the financial crisis, in the wake of the Iraq War. Conservatives were trying to find a way to rebuild their credibility with the American people, and they settled on this idea of the tea party. They started wrapping themselves in the mantle of the Revolutionary era and began a protest movement that focused on opposition to President Obama and opposition to government spending. You had a core of tea party activists who started springing up as early as February 2009. They started getting attention from Fox News. They started getting support from an array of national conservative groups with deep-pocketed funders—organizations like American for Prosperity and FreedomWorks—who provided a lot of organizational and institutional knowhow to those groups. They crescendoed into the Tax Day tea party rallies in April 2009.

Fox’s promotion of those started weeks in advance. Basically, they were ginning up support for them. They were doing segments telling their audience, These are the different tea parties that you can go to. If you’re interested in joining a tea party, we have a list on our website that can direct you to them. They were providing times and dates and locations for their viewers to attend, and they were participating. They had what they termed “FNC Tax Day Tea Parties,” which were four Fox shows that, on Tax Day, filmed from particular tea party rallies across the country. There were about a dozen different Fox News personalities who participated in tea party rallies to one extent or another. They really helped turn the tea party’s spark into what became a bonfire that fueled the Republican Party going into the 2010 elections.

Does it seem to you that this is happening now on a similar scale, and that it’s moving in a similar direction?

It’s still early. The Tax Day tea parties, again, were about six weeks after initial tea party rallies started. I think it’s likely that we will see some sort of focal point of these [coronavirus] protests, a particular date that they’re going to try to build to and get some momentum around. I haven’t seen anything about that yet, but it seems likely to me. They’re using the same playbook, for all intents and purposes. There was a report out of the Washington Post last week pointing out that [conservative activist and Trump adviser] Stephen Moore is forming this joint coalition group with FreedomWorks and a couple of other conservative organizations to push back against the state orders and try to force the reopening of the economy. One of the tactics that he specifically mentioned was protests. I think we’ll see that meld into these initial groups, and you’ll see a bit of a build.

“Right now, these protests are not polling terribly well. The idea of reopening the economy is not very popular. However, we’re still in the early stages.”

Right now, these protests are not polling terribly well. The idea of reopening the economy is not very popular. However, we’re still in the early stages there, as well. Once you have Fox News and President Trump championing these protests for a while, you’ll see polarization kick in, I think, and Republicans begin to support them in larger numbers.

In 2009, Fox News played an incredibly powerful role in getting people out to the Tea party rallies. At the time, we found about two dozen news stories that featured on-the-scene reporting from local reporters talking to people, asking them why they came there. The people said, “I saw it on Fox.” They’re an incredible force multiplier. They’re speaking to an audience of millions of people who are inclined to support President Trump and to oppose Democratic governors. They’re giving them an outlet. They’re giving them something that they can do to show their support for President Trump.

That’s the power that Fox News has. By virtue of their audience, by virtue of their credibility with that audience, they can serve as validators for a movement like the one against social distancing. We could see something quite similar here, where the protests start fairly small, but, after getting a lot of attention on Fox News, gain in power and influence until they become a real political force.

How has Fox’s coverage influenced Trump when it comes to these protests?

His tweets in support of the protests in several states that we saw last week came in response to a Fox segment he had been watching. They came about two minutes after that segment started and covered the exact same states that were mentioned in the segment, so he’s clearly—as he typically is—absorbing the coverage that he’s seeing on this topic from Fox News and reflecting it back. I think what Fox is telling him about these protests is that the participants are his supporters. That makes him much more inclined, in turn, to support them.

That’s interesting because, at least to an extent, the policies they’re protesting are also the policies that Trump and his administration—albeit maybe inconsistently—has supported. How is Fox dealing with the cognitive dissonance of pro-Trump protesters demonstrating against something that Trump himself has supported?

Trump himself has largely been excised from the story in a lot of Fox News’ coverage. You have this weird alternate reality where the public health experts are forcing all of these policy changes that, according to Fox, harm the people, and Trump is just not there. It’s not that he’s getting fooled. It’s not that he is acting deliberately and making a mistake. He’s just not mentioned in that particular discussion. They found a way to excise President Trump from the Trump administration for the purposes of criticizing a response to the coronavirus that, to some extent, is driven by the Trump Administration.

There have been reports about extremist groups at these protests. Does Fox talk about that at all?

The extremist participants are actually not being mentioned much on Fox. In fact, for much of today [Monday], they’ve been showing B-roll that features Alex Jones and Owen Shroyer, who are InfoWars conspiracy theorists, from a rally in Texas over the weekend. They have managed to do that without at any point mentioning that they are affiliated with InfoWars. Even as Jones himself is shown in the B-roll in a vehicle emblazoned with InfoWars logos, they’re just not mentioning it at all.