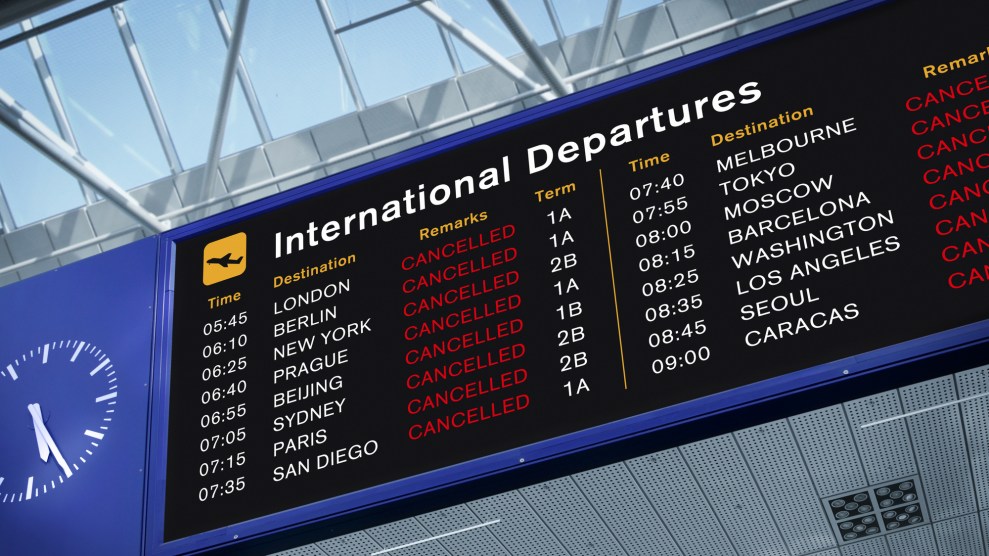 International Departures Information Board with All Flights Cancelled. Photomontage. SEE MY OTHER SIMILAR PHOTOS:/Getty Images

Michelle Mazzie has been a travel agent in Park City, Utah, for 30 years, serving mostly corporate clients and some leisure travelers. She also happens to be my sister. So when the travel industry became one of the first business casualties of the novel coronavirus, I started interviewing her about what that looked like on the ground as the pandemic first took hold.

Our first interview was on March 6. That’s the day Austin canceled its annual music and ideas festival South by Southwest. That’s also the day Vice President Mike Pence announced that 21 people aboard a Princess cruise ship were infected with the virus. President Donald Trump said he wanted to prevent it from docking in California because, “I don’t need to have the numbers [of US cases] double because of one ship that wasn’t our fault.” Businesses were canceling work travel; big conferences in Las Vegas and elsewhere were halted. I’d planned to write up the interview and post it soon after. But the travel industry proved to be a moving target. Everything we thought was true on March 6 turned was totally different a few days later.

Within a week of that first conversation, every major sporting event in the country, from professional hockey to college basketball, got canceled. Schools closed, the economy started slowing, and the airlines were panicking. I couldn’t update my story fast enough to keep up, so we just kept talking. I’ve continued to interview my sister several times over the past month about what it’s been like to be a part of an industry that is imploding, with projected losses of more than $400 billion in 2020. Here’s what she told me. (Our interviews have been edited for clarity.)

Can you describe what it’s been like to be on the frontlines of the travel industry during the pandemic?

It’s been a nightmare. People are just exhausted. We’ve been working night and day to get people home. We’re trying to balance the needs of our clients while following the guidelines that each travel vendor has in place. But the guidelines have been changing multiple times a day. I feel like I need a law degree to figure out the logistics. I really don’t want to make an error that will cost my company money in the long run. It’s not an easy job. When the airlines won’t answer their phones, we’re the ones that are fielding everything. My company did layoffs for the first time in its 35-year history, and it’s my understanding that the largest travel management company in Utah laid off 200 people a few weeks ago. It’s been hard to watch the whole world come down like that.

When I first started talking to you about the industry in early March, you said you had friends in the travel business who were traveling around a lot right now and saying how great it was because there were no crowds. Has that changed?

Yep. Now people are definitely canceling their trips. I feel like there wasn’t a clear direction when all this started happening. I have a friend who was stuck on a ship. She went to Antarctica. They were supposed to disembark on March 17, but no one would let them dock. They sent her to the Falkland Islands. She finally got home on the 27th.

Look at that there I am! A Signature Travel Expert. I love this conference. I have learned so much over the past year and met some awesome travel advisors along the way. #hesstravel #galavantingtattler #sigsocial #sigtn #travelmatters #lasvegas #mandalaybay #traveleducation #stn2019 @signaturetravelnetwork

What sorts of issues have your clients run into in the past month?

I had a gal call, and she was actually in Seoul [just before all the travel bans] and was flying to Melbourne. She was worried her flight wasn’t going to go, if she was going to be stuck there. Her flight went, and I think she was wondering if they were even going to let her get off the plane connecting through Sydney. She made it. But in Seoul, she was very concerned she’d be stuck there for 28 days. That would be so interesting because do you stay in a hotel room for 28 days and who pays for that? How much does it cost to stay in a hotel room for 28 days and eat?

Are people pissed off about having to cancel or postpone trips?

Pissed off? No, they’re mostly scared. I haven’t had anybody that’s been pissed off. Leisure travelers, they’re definitely not pissed off. It’s more of a concern thing.

I have heard that getting your travel canceled or changed, especially with the airlines right now is a nightmare. The hold times to call sound really long. Are people freaking out about this?

I feel like I should really point out that this is why you should use a travel agent. We could get [a flight] canceled and get it all figured out for you a lot faster, so you don’t have to wait four hours on hold with Delta. There is actually value in a travel professional. We will sit on hold for four hours for you. People who don’t book with us have actually called and said, “Is there something you can do?” We help them the best we can, but it’s hard when we didn’t do the booking originally.

What sorts of interesting questions are you getting?

Somebody asked me, “Do you think the airports will be empty when I go?” I said, “I sure hope so!” They want to know, “Will I get a whole row to myself?”

The Trump administration has made a number of missteps during this crisis that seem to have had an adverse impact on travel, like when he announced during a March 11 prime-time TV address, with no advance warnings, that travel from Europe to the US would be banned. Lots of people paid ridiculous amounts of money to get home before the ban took effect, and then many got stuck in crowded lines at the airport when they arrived in the US. Have moments like that made things worse for travel agents?

It has gotten worse. After he gave his speech, travelers went into a panic, and they were calling wanting to know what he meant, and we didn’t know. We had no idea what he meant. Nobody knew. On the [after-hours] lifesavers line, it was just panic. When we have all these people who are already in Europe, and then he comes out and says there’s a ban, and now they can’t come home. It’s been a lot. People were upset. They really took it out on the lifesavers line.

You couldn’t pay me enough to go on a cruise, even before the coronavirus outbreak. So I’ve been shocked to see that right up until the companies were forced to shut down people were going on them. Are you seeing any sort of change of opinions about cruise ships now that so many people have gotten sick on them?

Nobody has said they won’t get on a cruise ship. They are more just like, “When do you think we’ll be able to go?” People love cruising.

Have you ever seen anything remotely like this before?

There was 9/11 when all the flights were cancelled, and then people didn’t want to travel. That was interesting. Then there was SARS in 2003 and that cost $50 billion in travel. I think it was SARS that really hit the travel industry. But they say that this is more comparable to 9/11 as far as what the travel industry is going to lose, and that’s a lot.

“I feel like we have to be here for our travelers and the corporations we work with.”

Are you worried about your job?

My company has a contingency plan. I feel pretty confident in their plan, and I honestly believe that travel will come back because it always does. I feel like we have to be here for our travelers and the corporations we work with. I don’t know how long it will go on. That’s the unknown of it, right?

When the outbreak first started to get really serious, people were saying there were travel deals to be had. Were there any deals? And are they now all just a fantasy?

There are a few deals now. I think if you wanted to try to fly tomorrow you could get a really good deal! But then you land in DC or somewhere, and you have to be quarantined for 14 days. I think you can fly from DC to Salt Lake now for like $200 for immediate travel or in June, to Hawaii from SLC is $400. Soooo there are a few deals. But everybody should just stay home.

Is anyone actually traveling anymore?

It’s funny because every day, I’m so busy still doing cancellations. If somebody calls to book a new trip, I’m like, “How do I do that?” We’re like, “You actually want to buy something? Are you sure?” That’s the first question. I am happy to issue a ticket because I know next week I’ll be canceling. It will give me something to do.

One of the hardest things I’ve found about the pandemic is the way it’s put life on hold. I’m a big planner, as you know, and this time of year we’re usually making all sorts of plans: summer camp, vacations, trips to see you. What do you tell people who are in this weird purgatory?

You really have to go on like everything’s fine and make your summer plans. You could interview me now about the Utah toilet paper shortage.