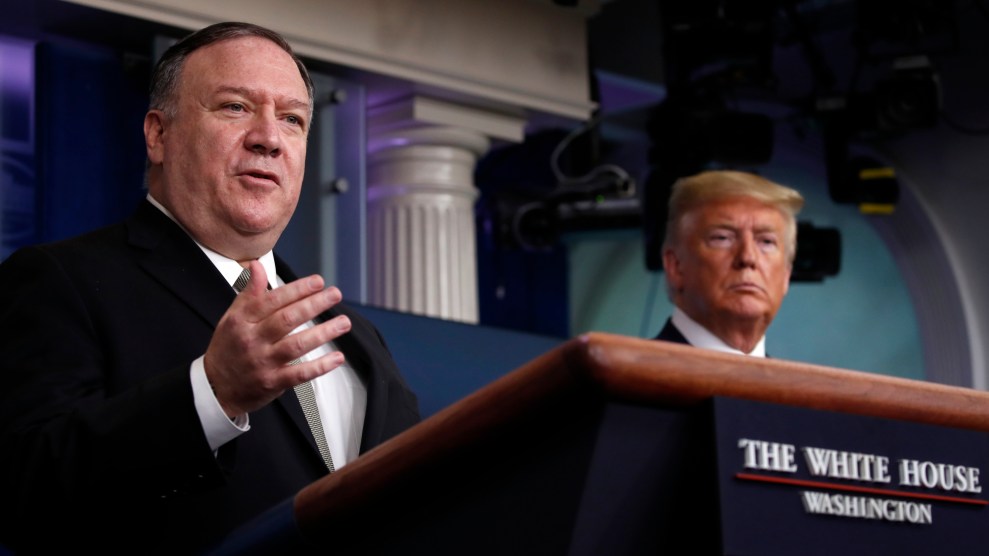 President Donald Trump listens as Secretary of State Mike Pompeo speaks about the coronavirus in the press briefing room of the White House.Alex Brandon/AP

An internal memorandum written by U.S. officials and addressed to Secretary of State Mike Pompeo warns that cutting funding to the World Health Organization, as President Donald Trump said he would do Tuesday, would erode America’s global standing, threaten U.S. lives and hobble global efforts to combat the coronavirus pandemic.

The memo, which was prepared before Trump’s Rose Garden announcement, was written by officials within the State Department’s Bureau of Near Eastern Affairs and includes a detailed list of how U.S. funding to the WHO helps countries in the Middle East control the pandemic.

A draft version of the memo, which was labeled “Sensitive But Unclassified” and was titled “Information Memo for the Secretary,” was seen by ProPublica.

It’s unclear if the memo has been sent to Pompeo, and the draft version reviewed by ProPublica was still unfinished. The State Department, the U.S. Agency for International Development and the White House did not immediately respond to requests for comment.

The Trump administration has worked closely with the WHO on pandemic response, especially in places where the United States has a limited presence. One U.S. official with knowledge of the State Department memo said it was likely written so that Pompeo could justify waiving parts of Trump’s order, allowing U.S. funding to the WHO to continue. The emphasis on how the halt in funding could bolster China was likely meant to appeal to anti-China hawks in the administration, this person said, speaking on the condition of anonymity.

Trump announced on Tuesday that he would halt WHO funding while his administration reviews what he described as mismanaging and “covering up” the coronavirus spread. He said the WHO had not done enough to call out China’s lack of transparency. The virus originated in China before spreading worldwide.

But Trump himself has praised China for its coronavirus response. On Jan. 24, he tweeted that China “has been working very hard to contain the Coronavirus,” and that the U.S. appreciates the country’s “transparency.”

A White House fact sheet issued on Wednesday said the administration will “redirect global health aid to others directly engaged in the fight.” But in some countries with weak health sectors, the WHO is by far the strongest conduit for U.S. and other international funds meant to protect public health, a U.S. official with knowledge of the situation said. That could mean the administration will find it difficult to reprogram funding originally meant for the agency.

The U.S. is the largest donor to the WHO, contributing more than $400 million per year. And the administration had chosen to funnel extra funds provided by Congress through the WHO as well, a tacit endorsement of its capabilities.

“Current discussions regarding pausing U.S. assistance to the WHO to combat the pandemic risks not only further undermining our ability to help host governments address urgent needs, but also undermines the U.S. narrative of a long-standing partner at precisely the time posts are most reliant on that narrative,” the memo said.

Pausing funding to the organization, the memo said, “will impact over $50 million in U.S. assistance planned to help host governments address urgent needs and risks undermining the U.S. narrative of a long-standing health leader, ceding ground to the (People’s Republic of China).”

Congress provided that funding in supplemental packages in March, the memo said.

Congressional Democrats quickly denounced Trump’s decision to halt funding to the WHO, and they argue that at least some of the U.S. funding to the organization is beyond his power to stop.

“President Trump does not have the authority to withhold funds that Congress has appropriated for the United States’ assessed contribution to the World Health Organization,” said Evan Hollander, a spokesman for the House Appropriations Committee.

But the emergency funds given to the State Department and USAID and referenced in the memo are separate from the “assessed contributions.” The additional funding that Congress provided for the coronavirus response gave the administration much more flexibility to determine recipients, meaning that Trump is legally able to halt those funds.

The memo detailed a number of key WHO activities related to the pandemic fight. In Lebanon, the WHO sent test kits in February and planned to send masks, gloves and other supplies afterward, the memo said. In Yemen, which is already experiencing a humanitarian crisis because of years of war, the WHO was working to open ports for humanitarian supplies and providing American and Chinese tests.

In Libya, which is also in ongoing conflict, the memo said the WHO is “the most technically viable implementing partner on public health issues; very limited alternatives exist.” Around two dozen Americans in Libya have said they want to return to the U.S., but the State Department cannot help them do this for now, the memo said, and the agency has urged them to shelter in place. “Any one of them who encounters a health crisis will likely depend on WHO-provided assistance to make it through,” the memo said.

In Algeria, where the coronavirus pandemic has proven especially deadly, USAID had approved half a million dollars in funding for the WHO’s response in the country and was considering sending a further $1.5 million, the memo said.

“The PRC, meanwhile, has sent a medical team of 13 doctors and eight medical assistants, while private organizations have donated over $450,000 worth of medical equipment,” the memo said, referring to China.