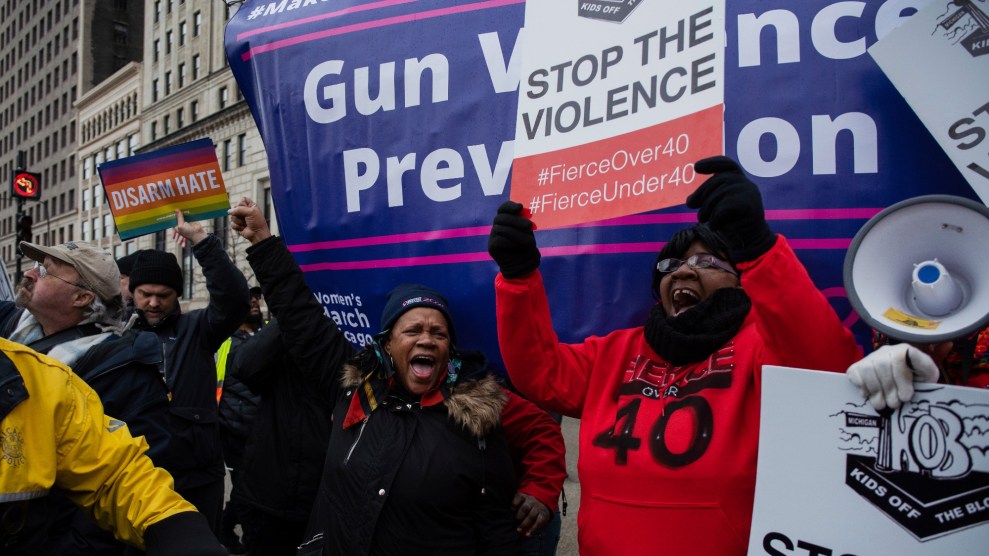 On an unseasonably warm and sunny day in early April, Chicago hit a deadly milestone: 21 people were shot—including a 5-year-old girl who was wounded while sitting on a front porch. Seven of the 21 people shot in the city died from their injuries. It was the highest number of gun-related deaths that the city had seen in a single day since 2018—an especially tragic milestone considering that Illinois, like most other states around the country, was under stay-at-home orders to help stop the spread of the novel coronavirus.

As Chicago struggles to treat the flood of COVID-19 patients, a surge in gun violence continues to disproportionately affect the city’s most vulnerable communities and further puts a strain on the city’s resources—hospitals all over the city are already overwhelmed fighting the novel coronavirus. But Chicago is far from the only city that’s struggling with the dueling public health crisis of COVID-19 and gun violence. Though overall crime may be down nationwide because of the pandemic, gun violence is surging in several major cities—including Cincinnati, Philadelphia, and Dallas—and many of those cities’ resources to address the issue are dwindling. In Philadelphia, for example, homicides are up 17 percent compared to this point last year, while in Cincinnati, the homicide number is up more than 90 percent.

Mayors from cities across the country are asking Congress to step in and provide additional funding for frontline workers who work to prevent the spread of gun violence. In a letter sent on Friday by the gun violence advocacy group Giffords to Senate and House leadership, the mayors of 17 cities—including Los Angeles, Oakland, Philadelphia, Baltimore, Richmond, Pittsburgh, and Newark—are asking for additional funding specifically to address the spike in gun violence. “Our emergency resources are dedicated to protecting public health and safety, but we do not have enough health care resources to fight both these battles,” the letter reads. “We need our health care resources to combat COVID-19, and we need specific resources to tackle gun violence and support the frontline workers and organizations who are already working to do so.”

With looming budget cuts due to the funds spent fighting COVID-19, some mayors are worried that money that would be used to support vulnerable communities and curb gun violence are on the chopping block. In many cases, these communities are also being disproportionately ravaged by COVID-19, and as a result violence interrupters in these communities have had to take on a duel role not just as community mediators but as health advocates. In Chicago, my colleague Samantha Michaels profiled one such group, the Target Area Development Corp.:

Auburn Gresham, already one of Chicago’s most dangerous neighborhoods, is now reeling from the coronavirus. One section of the neighborhood has logged at least 487 infections so far, and for a while had more infections than any other zip code in the city. Mayor Lori Lightfoot deemed Coakley and about 200 other street outreach workers essential workers, sending them letters to show to police if they are stopped for being outside during their work. The hope was that, during their regular outings into their neighborhoods, they would continue to deter violence—and now they could also inform people about how to stay healthy during the pandemic. In the coming months, these workers are “going to be a lifeline for some of those communities,” says Dr. Ezekiel Richardson, an emergency-room doctor who is working with community organizations on the South Side to inform people about the disease.

Even though many of these programs could receive financial support via the CARES Act’s Paycheck Protection Program, according to the Giffords letter that program has fallen short for a number nonprofits, especially community-based violence prevention organizations whose budgets are often dependent on their affiliation with larger fiscal sponsors.

“In the midst of a difficult situation, violence interrupters and street outreach workers are providing hope and lifelines to communities who need it,” says Peter Ambler, Giffords’ executive director. “They are the first line of defense, lending a helping hand to those troubled by gun violence while taking on new responsibilities in the effort to stop COVID-19 from spreading. In this emergency, we can’t afford to have the lights go out on the violence intervention programs they work for.”