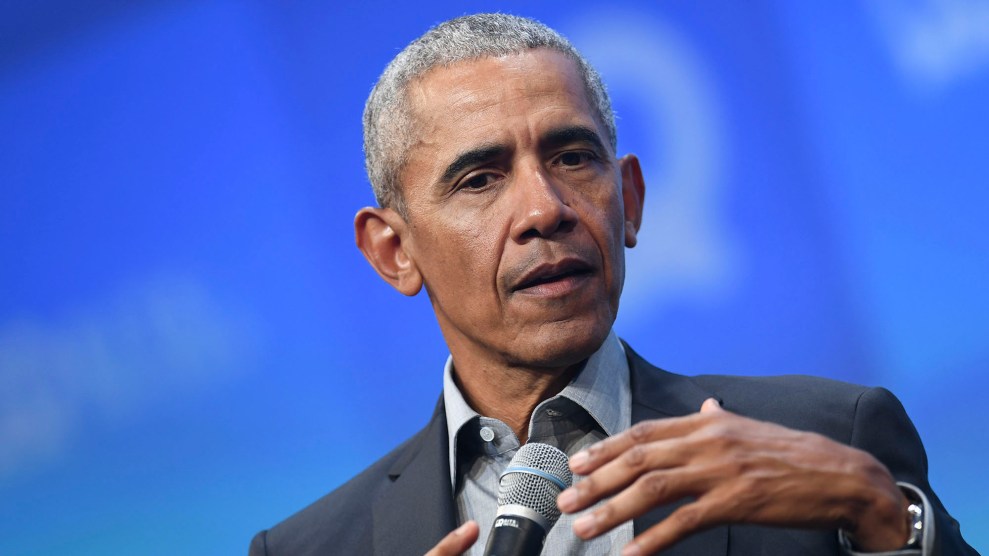 Former President Barack Obama said Friday that the Department of Justice’s decision to drop charges against former Trump National Security Advisor Michael Flynn means that the “basic understanding of rule of law is at risk.”

The comments were made in a private web chat conversation with members of the Obama Alumni Association, a recording of which was obtained by Yahoo News’ Michael Isikoff, who wrote about the comments late Friday.

Obama, who had once fired Flynn as his director of the Defense Intelligence Agency for being “chaotic [and] insubordinate,” Isikoff notes, said on the recording that the news about Flynn’s case had been “somewhat downplayed” but was incredibly worrying.

“And the fact that there is no precedent that anybody can find for someone who has been charged with perjury just getting off scot-free,” Obama said. “That’s the kind of stuff where you begin to get worried that basic—not just institutional norms—but our basic understanding of rule of law is at risk. And when you start moving in those directions, it can accelerate pretty quickly as we’ve seen in other places.”

Isikoff notes that Obama misstated Flynn’s charge: He had pled guilty to lying to FBI investigators, not perjury. Flynn’s guilty plea came in late 2017 after he lied to FBI agents about whether he’d talked with then-Russian ambassador Sergey Kislyak during the presidential transition period in January 2017. As reported by Mother Jones‘ Dan Friedman, in November 2017 Flynn pled guilty to lying to FBI agents about the conversations with Kislyak, while also admitting that he had lied to the FBI about efforts to influence foreign diplomats during a December 2016 UN resolution on condemning Israeli settlement construction. Misrepresenting the truth was a regular habit of Flynn’s. He also admitted lying to the Justice Department in a Foreign Agents Registration Act filing by claiming he was not aware that he was lobbying for Turkey. And he’d lied to Vice President Mike Pence about the call with Kislyak, which Trump acknowledged.

During his sentencing hearing on December 18, 2018, Emmet Sullivan, the federal judge during sentencing, told Flynn that he “arguably … sold [his] country out,” and added that he wasn’t going to hide his “disgust [and] disdain for this criminal offense.” Flynn repeatedly declined to withdraw his guilty plea, and told the judge he didn’t think he’d been set up to lie to the FBI.

Trump has repeatedly said Flynn was treated unfairly by the FBI, and Attorney General William Barr had tasked federal prosecutors with reviewing the case as part of his sustained scrutiny of convictions related to former special counsel Robert Mueller’s investigation into Trump associates and the Russian interference efforts in the 2016 US elections. Barr has already forced prosecutors to reduce a sentencing recommendation for Roger Stone, a longtime Trump adviser, causing several federal prosecutors from the case to withdraw in protest. Barr had also previously caused prosecutors in the Flynn case to lower a sentencing recommendation. When the Justice Department moved to drop his case this week, it said in a filing that FBI agents had no valid reason to have questioned Flynn at the time he lied, and therefore couldn’t prove that a crime occurred.

Obama pointed to the Flynn case Friday—and the Trump administration’s handling of the COVID-19 pandemic—as why November’s election is particularly important.