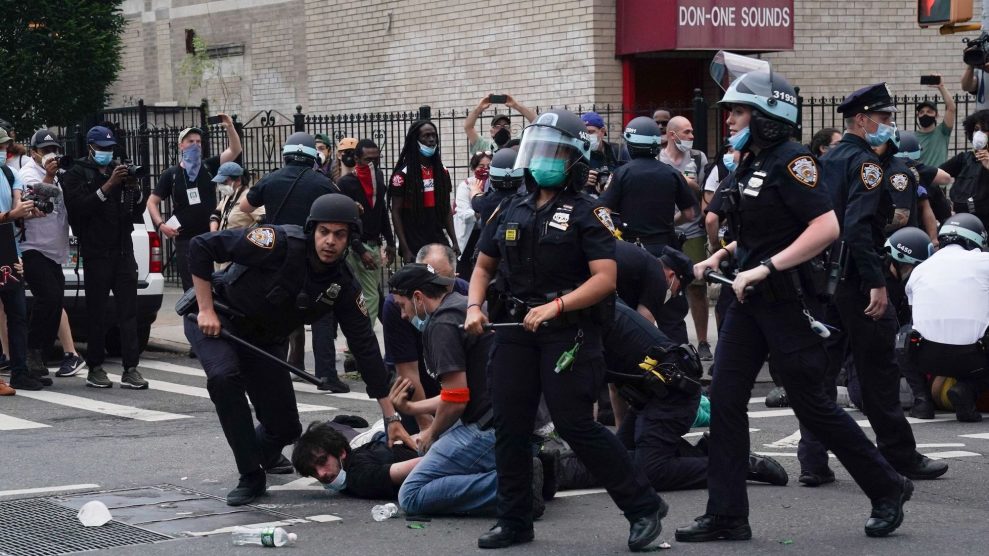 NYPD officers cuff a protester during a demonstration against the killing of George Floyd.Bryan R. Smith/Getty

Congressional Democrats introduced legislation on Monday designed to curb police brutality, with sweeping provisions to overhaul law enforcement practices. But civil rights activists say the bill falls short of what’s needed and that provisions that would appear to clamp down on police violence will have little real effect.

At the center of this criticism is the Justice in Policing Act’s proposal to ban chokeholds by police officers. High-profile deaths of African Americans at the hands of police, including the cases of George Floyd and Eric Garner, were the result of strangulation, which the bill seeks to address with the nationwide ban. But according to activists, bans introduced at a local level have been ineffectual in practice.

“Cities that have banned chokeholds 20 years prior have had instances of police brutality with chokeholds,” says Jacqueline LaBayne of Freedom Fighters DC, an activist organization formed during the last two weeks of protests across the nation’s capital. “So it’s not just enacting, but making sure officers do not do it.” That reaction was echoed by Hawk Newsome, chair of Black Lives Matter of Greater New York (which is independent from the network of Black Lives Matter chapters). “The chokehold ban, in essence, is useless,” says Newsome. “Unless you’re tacking on a felony or a murder charge, or criminal liability to these things, and to this bill, then it’s a toothless guard dog.”

In fact, the type of chokehold that killed Garner in 2014 had been banned in New York City for more than a decade at the time. The officer responsible for his death was fired five years later without being charged in relation to Garner’s death. In the four years leading up to Garner’s death, New York City received more than 1,000 chokehold complaints against its police officers. “In the midst of that in New York, chokeholds were banned in some way shape or form,” says Monifa Bandele of the Malcolm X Grassroots Movement, a human rights organization that focuses on Black communities. “The response was to dump money into trainings. And we still result in losing the lives of Black people in our community.”

Overall, activists say the bill is a mixed bag. “Our initial thoughts were: This is a good start,” says LaBayne. “But this should have already been implemented, so we have a long journey ahead of us.”

Among the bill’s proposals that activists say have long been needed are the end to qualified immunity—which prevents those whose constitutional rights have been violated by law enforcement from collecting damages—and the rollback of easy access to military equipment for police departments. Kumar Rao, the director for justice transformation at the Center for Popular Democracy, says these are steps that “Congress should have taken long ago.” He believes the militarization rollbacks are “under-responsive to the moment,” since the bill limits police access to military-grade weapons and equipment without actually eliminating it.

Some activist groups have long called for a chokehold ban. Campaign Zero, an activist organization that was born out of the Ferguson demonstrations, included a chokehold ban on a list of eight law enforcement policy changes that the group released after Floyd’s death. The organization says the chokehold ban, taken with its other recommendations—like bans on shooting at vehicles and an emphasis on deescalation—would “decrease police violence by 72 percent.” The campaign also says chokehold and stranglehold bans lower police killings per capita by 22 percent where they’re implemented. (That’s a matter of dispute: An economist told Vox, “I can’t think of rigorous evidence related to any of their eight recs.”)

Still, to many activists, a chokehold ban doesn’t get at the heart of the issue, which is redefining the scale and scope of police departments—an area where they say the bill falls short.

“This is a fight that we’ve been pushing for many many years,” Bandele says. “I wouldn’t say I’m left feeling hopeful or disappointed. I remain in this stance that we defund the police, we have a huge paradigm shift and reimagine what public safety looks like 2020 and beyond. Anything short of that, we’ll still be pushing.”