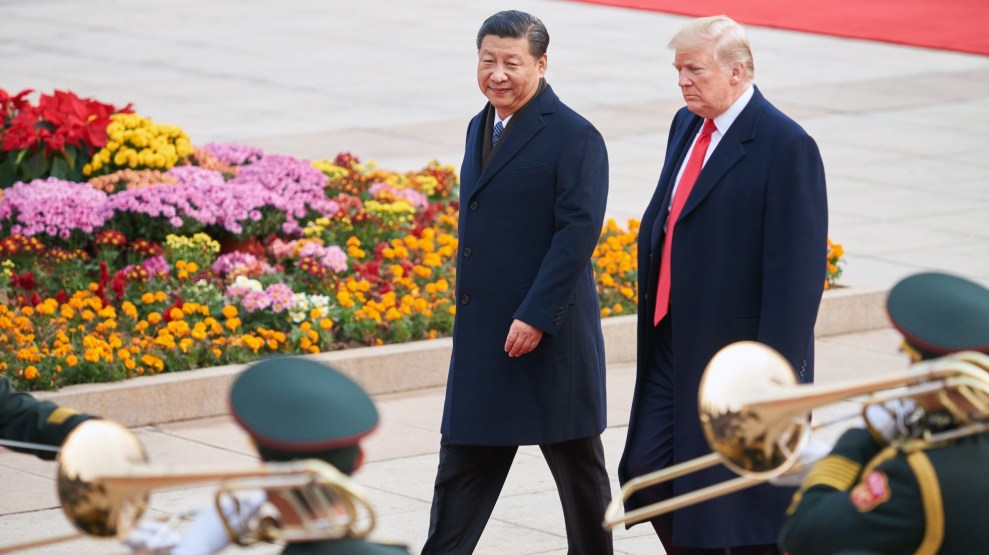 President Donald Trump reportedly said China’s decision to detain Uighur Muslims in concentration camps was “exactly the right thing to do” and encouraged Chinese leader Xi Jinping to “go ahead with building the camps,” according to a book excerpt published Wednesday by John Bolton, Trump’s former national security adviser.

Over the past few years, Trump has frequently oscillated between threatening China and lathering on praise for Xi, but Bolton’s revelation, if true, documents one of the more shocking examples of Trump’s cavalier approach to human rights and reverence for authoritarian leaders.

The excerpt, which Bolton published in the Wall Street Journal, contains numerous instances of Trump downplaying human rights concerns in Hong Kong and the Chinese mainland. Last year, when Hong Kong saw massive protests in response to a controversial extradition bill that chipped away at the semiautonomous region’s tenuous independence from China, Trump reportedly said, “I don’t want to get involved,” and, “We have human-rights problems too.” (Note this is something of a common theme for Trump; in an interview back in 2017, the president responded to Bill O’Reilly calling Vladimir Putin a “killer” by saying, “There are a lot of killers. You think our country’s so innocent?”)

Bolton also claims that Trump refused to issue a White House statement to commemorate the 30th anniversary of the Tiananmen Square massacre, when Chinese forces killed scores of pro-democracy demonstrators. “That was 15 years ago,” he reportedly said. “Who cares about it? I’m trying to make a deal. I don’t want anything.”

Still, an even more disturbing anecdote captured by Bolton, who was fired in September 2019 after a series of policy disputes with Trump, concerns the treatment of Uighur Muslims, who have undergone systemic detention, repression, and surveillance under Xi. Here’s how Bolton describes it in the Journal excerpt:

At the opening dinner of the Osaka G-20 meeting in June 2019, with only interpreters present, Xi had explained to Trump why he was basically building concentration camps in Xinjiang. According to our interpreter, Trump said that Xi should go ahead with building the camps, which Trump thought was exactly the right thing to do. The National Security Council’s top Asia staffer, Matthew Pottinger, told me that Trump said something very similar during his November 2017 trip to China.

Trump has made no secret of his disinterest in upholding the traditional role for the United States as a defender of human rights. But this conversation with Xi, if true, would mark a stunning endorsement by a sitting American president of the torture and cultural genocide of millions of Muslims. It would also, in a less surprising turn of events, be yet another instance of Trump contradicting his own administration’s policy in private. Only last year Secretary of State Mike Pompeo called the Chinese treatment of Uighurs the “stain of the century.”

The treatment of the Uighurs has been a bipartisan concern among lawmakers too. Last month, Congress near-unanimously passed the Uyghur Human Rights Policy Act, which imposes sanctions on Chinese officials for “gross human rights abuses” that include the use of “indoctrination camps” and “intrusive surveillance.” Earlier today, Trump signed it into law.