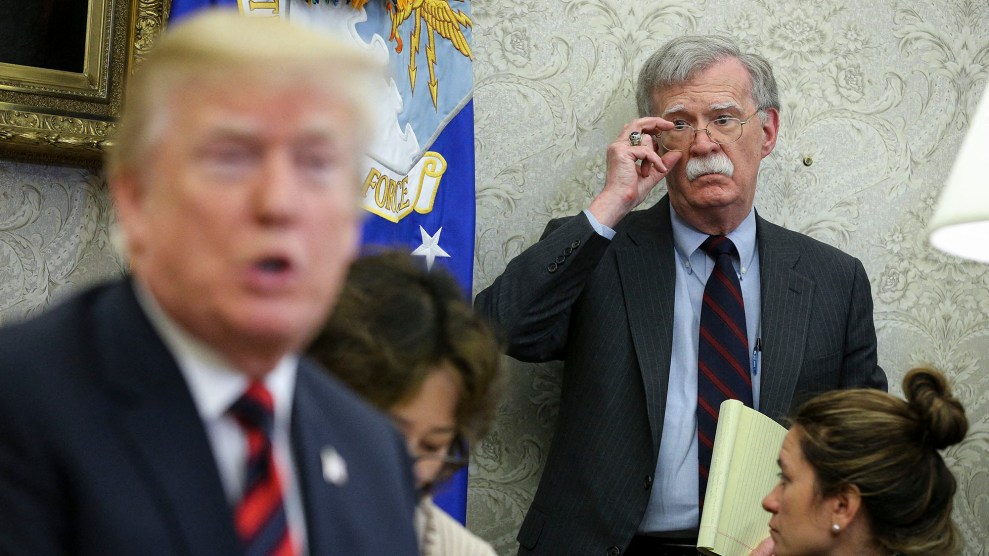 A federal judge on Saturday rejected Trump’s efforts to halt the publication of former national security advisor John Bolton’s tell-all book about his 17 months in the White House. The judge ruled against Trump’s proposed restraining order of the book, The Room Where It Happened, which is set to publish on Tuesday.

Excerpts of Bolton’s memoir have been leaking since January, when, amid the Senate’s impeachment trial of Trump, the New York Times recounted a section of the book claiming Trump told Bolton that military aid for Ukraine was conditioned on an investigation into the Bidens. Earlier this week, reporting on different excerpts revealed that Trump had “pleaded with Chinese President Xi Jinping to help Trump’s electoral prospects by purchasing US agricultural products—and thus improving Trump’s standing in rural states hurt by his trade war with China.”

Yet Bolton still has not testified under oath about what he saw transpire in the White House.

“For reasons that hardly need to be stated, the Court will not order a nationwide seizure and destruction of a political memoir,” Lamberth said. “In taking it upon himself to publish his book without securing final approval from national intelligence authorities, Bolton may indeed have caused the country irreparable harm. But in the internet age, even a handful of copies in circulation could irrevocably destroy confidentiality.”

Lamberth also indicated that Bolton may be wrong in his assessment that the book contains no classified information. If that’s the case, Bolton could face criminal prosecution and may be unable to hold onto any profits from his book.

“This was Bolton’s bet: If he is right and the book does not contain classified information, he keeps the upside mentioned above; but if he is wrong he stands to lose his profits from the book deal, exposes himself to criminal liability, and imperils national security. Bolton was wrong,” Lamberth said.