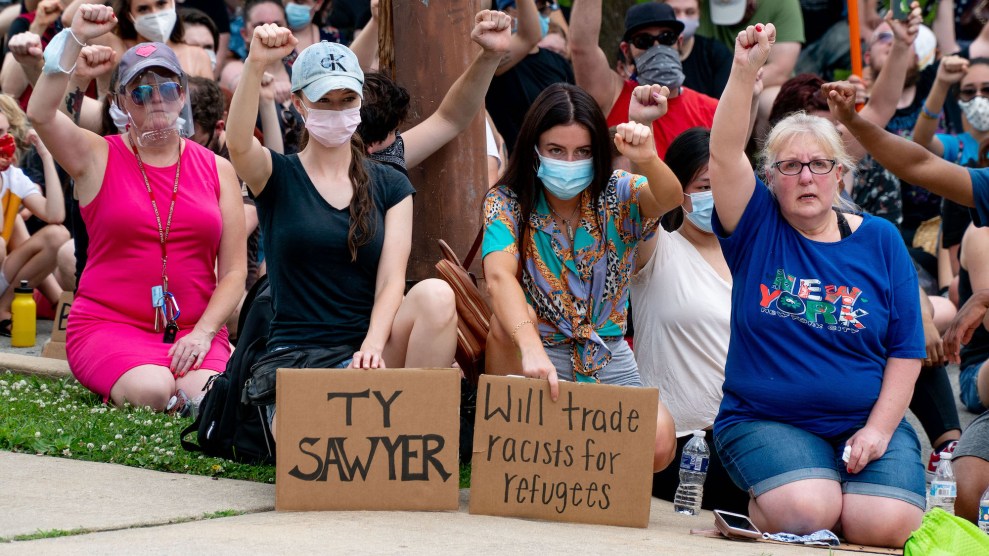 Protestors call for an end to racial injustice outside the Glenolden Police headquarters in Delaware Country, Pennsylvania, on June 20, 2020.Michael Candelori/ZUMA

By the end of the day on Saturday, June 6, the biggest day of nationwide protests sparked in the wake of the police killing of George Floyd, a trend was undeniably clear: A sizable number of these protesters were white, marking a departure from past racial justice demonstrations where people of color largely bore the burden of calling for change. That was true not only in the predictable liberal enclaves of Brooklyn and Washington, DC, but also in conservative corners like Quakertown, Pennsylvania, an 8,000-person town 50 miles from Philadelphia with a population that’s more than 90 percent white, and Carrollton, Ohio, a hamlet with just over 3,000 residents, nearly all of whom are white.

The show of support from such disparate swaths of America has changed the tenor of the conversation about police brutality, Black Lives Matter–aligned activists say, leading them to conclude that this moment could finally deliver the change they’ve long sought. And the strong showing among white women, in particular, is a notable shift: The “tough on crime” approach that fueled heavy investments in policing over the past half-century owes its origins to the very sorts of women who took to the streets in protest. White suburban women—political shorthand for middle- to upper-class, often college-educated, often married women—prioritized their families’ safety and security and gave into fear-mongering over crime at the ballot box, regardless of their political ideologies.

Cycle after cycle, politicians of both parties have courted the swing subset of these voters, dubbed “soccer moms” or “security moms,” with campaign promises centered on their safety concerns. In 2016, exit polling showed that a slight majority of white women voted for Donald Trump and his campaign promises of “law and order.” Meanwhile, in her campaign postmortem What Happened, Hillary Clinton blamed her loss in part on showing support for Black Lives Matter activists, whose movement was still in its early days when she ran for president four years ago.

The current nationwide unrest collides with another election cycle, and this time around, white suburban women are willing to say “Black Lives Matter.” That’s already spelling big trouble for Trump: His crackdown on the protesters has worsened his “woman problem,” in the words of one of his advisers; a recent New York Times analysis found Trump 25 percent behind Biden in support among women, a six-point decline since April. But experts who study this demographic caution it would be a mistake to assume these voters’ candidate preferences mean they support the demands that the Movement for Black Lives activists are making. And that could have an impact on the policies their favored candidate may be willing to adopt: While that shouldn’t matter for a movement that isn’t centered on this demographic, the courtship of these women as swing voters doesn’t seem to be fading anytime soon.

For as long as suburbs have existed, white women who live in them have never functioned as an ideologically unified voting bloc. During the 1964 presidential election, some in Southern California signed up as foot soldiers for Barry Goldwater’s campaign, while their peers living in the outskirts of Boston mobilized on behalf of civil rights, says Matthew Lassiter, a historian who studies urban and political history at the University of Michigan.

But even among left-leaning white women who supported fair housing and school desegregation, Lassiter says, concern about police brutality “wasn’t really on their radar.” Part of that was a side effect of the circumstances that led them to the suburbs. “Suburbanization and racial tension in US metro areas went hand-in-hand,” says Tom Sugrue, a historian who studies cities and civil rights at New York University. “White suburbanites had a fear of the cities they were leaving. Law and order politics found very rich soil to grow in.”

And over the next 30 years, it did. As cities’ crime rates skyrocketed, suburbanites tucked themselves into their majority-white enclaves. From a distance, they conflated urban unrest with race, and they sympathized with the police. And as they did, they firmly embraced a “tough on crime” posture, says Lara Putnam, a historian who studies grassroots politics at the University of Pittsburgh. Politicians in both parties responded to the growing fear of crime with sweeping legislation, beginning with President Lyndon Johnson’s 1968 Crime Control and Safe Streets Act, which provided federal funding for local law enforcement, through the 1994 crime bill, which ushered in an era of heavy policing and mass incarceration. Biden, then a US senator from Delaware, authored that legislation, and it passed the Senate with overwhelming bipartisan support. Programs like Mothers Against Drunk Driving and the DARE program also owe their origins to that impulse.

White women’s support of Donald Trump continued that trend, but as Trump took office, seeds of countervailing influences were taking root. The Black Lives Matter movement garnered widespread national attention in 2014 after the police killing of Michael Brown, an unarmed Black teenager, in Ferguson, Missouri, and ignited the first sparks of the “Great Awokening,” a rapid increase in white Americans’ concerns about racial inequality. And Trump, who has rarely missed an opportunity to race-bait during his four years in office, disgusted huge numbers of white suburban liberals and moderate voters. “Trump has forced white liberals to recognize the racism that organizes our society,” Lassiter explains.

The Trump era has seen the emergence of the “resistance” woman, a small, progressive-leaning subset of educated white women radicalized by Trump’s win. But the video of a Minneapolis police officer crushing Floyd’s neck appears to have moved many moderate and even right-leaning white people. “What they see there is beyond the pale of what is acceptable,” says Lily Geismer, a professor of history at Claremont McKenna College. She notes that the images of undocumented immigrant children separated from their families in ICE detention facilities had a similar mobilizing effect.

“Trump has forced white liberals to recognize the racism that organizes our society.”

A test of the new suburban political landscape came last month when protests against the killings of Floyd and Breonna Taylor—a 26-year-old Black woman shot by the police in her Louisville home—were accompanied by looting, vandalism, and the burning down of a Minneapolis police precinct. Media outlets played images of broken glass and fires on an endless loop. “There would be reason to think that this moment might spur some kind of white backlash—the sort that some political actors in this country are eager to spur,” says Putnam.

But that hasn’t happened. In addition to the widespread protests in majority-white suburban and rural towns, polling shows a sea change. A Monmouth University poll of registered voters conducted in the wake of the Floyd protests found 59 percent of women believed the police were more likely to mistreat Black people than white people, as did nearly half of white respondents—double the number who said so in July 2016. Nearly three-quarters of white respondents described racial discrimination as a “big problem,” a 26-point increase from 2015. An NBC News/Wall Street Journal poll found that just 27 percent of white voters said they were more worried about the protests in which vandalism ensued than about Floyd’s and police conduct.

The political analyses arrived swiftly on the heels of the unrest. Politico proclaimed that white Americans’ “reckoning with racism” could “reshape 2020.” Time made a similar assertion. Comedian Akilah Hughes observed, tongue-in-cheek, that the much-maligned Karens of the world were making a difference. “White women: please keep this ‘I want to speak to the manager energy’ about the police,” she tweeted.

But what policing reforms will these voters support? That’s a trickier question. The Monmouth poll found that a majority of women voiced at least some satisfaction with their local police departments, though a Politico/Morning Consult poll conducted this month found that nearly two-thirds of independent women voters think police departments need “a complete overhaul” or “major reforms.” That same poll found that a slight majority of independent women voters oppose calls to “defund the police,” and only 35 percent support reallocating any funds to other non-police government entities to support community development programs.

Trump, it seems, is banking on their opinions holding steady. “Do you think Suburban Women want to Defund the Police?” he tweeted last Friday, citing Fox News contributor Marc Thiessen. “I don’t think so.” But the shifts in women voters’ opinions show that Trump’s repeated calls for violent crackdowns against the demonstrators have benefited Biden, whom nearly half of independent women voters trust over Trump to fix race relations, according to the Politico/Morning Consult poll. But Biden, too, has resisted activists’ calls to drastically reduce police budgets. He’s sympathized with protesters as he’s called for some reforms they back, such as an end to chokeholds, as well as some they don’t, such as a drastic increase in community policing, which they say does not address problems of racial profiling.

This political uprising is, of course, not about white voters, and it’s not about the presidential race. It is about Black Americans and the systemic racism that endangers their lives. But as Geismer and Lassiter pointed out in a 2018 New York Times op-ed, Democrats have maintained a 40-year streak of siding with white professionals over other Democratic constituencies. “Suburban voters hold a tremendous amount of political capital and are able to change the political conversation,” Geismer tells me.