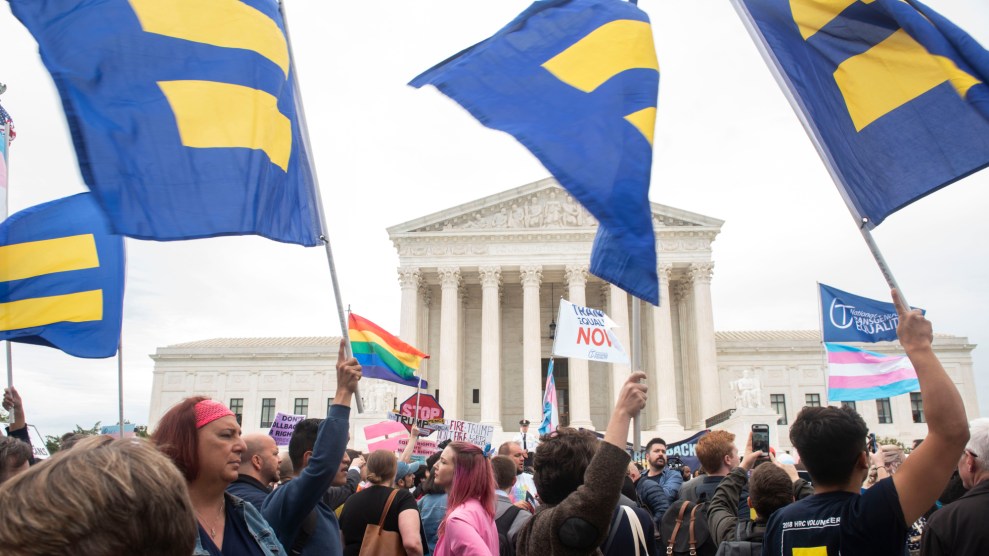 The Supreme Court's decision to protect gay and transgender Americans from employment discrimination comes in the midst of the Trump Administration's attack on the LGBTQ community.Kevin Wolf/AP

On Monday, the Supreme Court handed LGBTQ Americans one of their biggest civil rights victories yet. In a 6-3 decision, the court ruled that gender identity and sexual orientation were protected under Title VII of the 1964 Civil Rights Act’s prohibition on sex discrimination in employment. The decision means LBGTQ folks can no longer lose their jobs simply for being queer.

“In our time, few pieces of federal legislation rank in significance with the Civil Rights Act of 1964,” writes Justice Neil Gorsuch, a Trump appointee, in the majority opinion. “There, in Title VII, Congress outlawed discrimination in the workplace on the basis of race, color, religion, sex, or national origin. Today, we must decide whether an employer can fire someone simply for being homosexual or transgender. The answer is clear. An employer who fires an individual for being homosexual or transgender fires that person for traits or actions it would not have questioned in members of a different sex. Sex plays a necessary and undisguisable role in the decision, exactly what Title VII forbids.”

The ruling provides some much-needed clarity for lower courts and state officials, who are currently working with a hodgepodge of different (and sometimes conflicting) nondiscrimination policies.  Until Monday, the 10th Circuit Court has maintained that transgender people are not protected by prohibitions on sex discrimination under Title VII. And Mark Horton, the gay man from Illinois I wrote about last year who says he had a job offer rescinded after his future employer found out he was married to a man, will finally get his day in court.

And though the case was specific to employment discrimination, the implications beyond the workplace are huge. The ruling won’t directly overturn discriminatory policies outside the realm of employment, says Sharon McGowan, Legal Director for Lambda Legal—which argued one of the Title VII cases before the Second Circuit Court—but it does set a precedent that makes it incredibly difficult to exclude gay and transgender people from other laws that prohibit discrimination on the basis of sex.

Take, for example, the Fair Housing Act. In 1974, the act was amended to prohibit housing discrimination on the basis of sex, but to date, only 24 states interpret that to include LGBTQ people (or have passed state legislation that explicitly includes them). One additional state, Wisconsin, prohibits discrimination against gay people, but not transgender people. Through the years, studies have shown that LGBTQ renters and home owners have been overcharged, less likely to secure rental housing or even evicted because of their sexual orientation and gender identity.

Experts say the Supreme Court ruling could also effect things like Title IX of the Education Amendments Act of 1972—which prohibits sex discrimination in education and has recently been weaponized against transgender student athletes—and health care nondiscrimination policies.

Just last week, Trump’s Health and Human Services Department released a prepublication version of a rule change that would roll back protections for transgender patients under the Affordable Care Act. The change is meant to undo an Obama-era policy that barred providers and insurance from rejecting care based on gender identity.

“There is still a chance for HHS to see the error of their ways and pull the rule back and fix their mistake, which I hope they will do,” McGowan says. “But assuming that they’re going to continue to forge ahead, they basically have put forth a rule that says ‘we, in the federal government, think that sex discrimination doesn’t mean the things that the Supreme Court has just said sex discrimination means.’ HHS is contributing to confusion at a time when the Supreme Court could not have spoken more clearly than it did this morning.”

But now, the bad news: Monday’s Supreme Court ruling does nothing for laws that don’t include sex in their nondiscrimination policies—and unfortunately there are more of them than you might think. Federal law prohibits discrimination in public accommodations (e.g. restaurants, retail businesses, parks, libraries) based on race, color, religion and national origin only. The same is true of discrimination prohibitions in certain federally funded programs.

“I remain more optimistic than I’ve ever been, that we will continue to succeed in rooting out discrimination in all of its forms,” says McGowan. “But I do think that there are going to be issues that that many courts—particularly courts that are hostile to the underlying pinnings of these rulings—may try to find wiggle room maybe where it doesn’t exist. We know that our work is going to continue.”