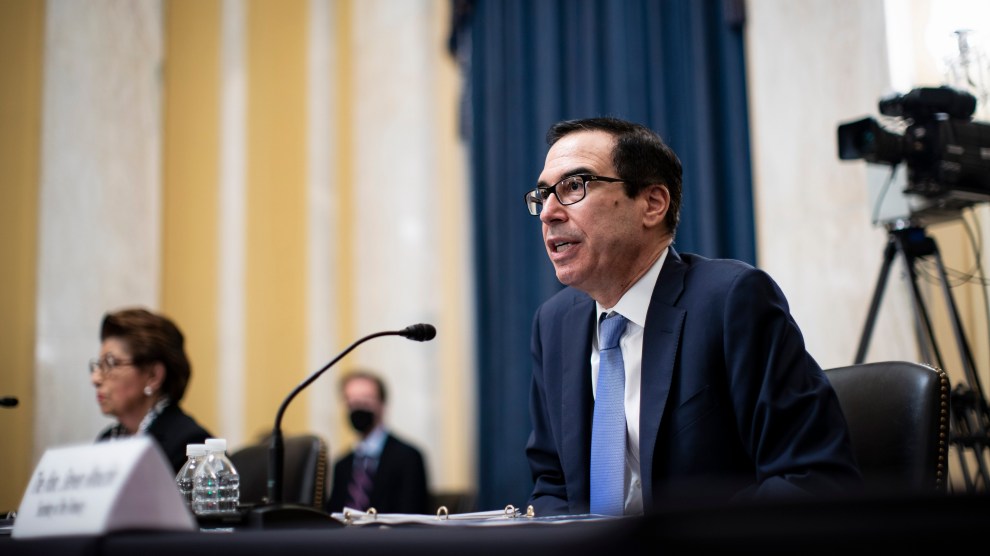 Earlier this spring, Treasury Secretary Steven Mnuchin pledged that when it came to giving out billions in coronavirus relief funds, the Trump administration would strive for “full transparency.” “I think that the American public deserves to know what’s going on, given the amount of money that we’ll be putting out,” he told CNBC on April 8.

On Sunday, White House economic adviser Larry Kudlow told CNN that the Trump administration had never promised to release the names of companies that received a total of more than $500 billion in forgivable loans under the Paycheck Protection Program, enacted by Congress this spring as part of a sweeping stimulus package to mitigate the economic effects of the pandemic.

“Insofar as naming each and every company, I don’t think that promise was ever made,” he said on CNN’s State of the Union. “And I don’t think it’s necessary.” Regarding Mnuchin’s earlier statements, he added, “I think when Secretary Mnuchin talked about transparency, he talked about the transparency of the process of making the evaluation for the loan and then the distribution of the loan.”

Kudlow’s statements were the latest pronouncements from the Trump administration and allies that appear to muddy earlier assurances about transparency regarding the more than 4 million companies that received PPP loans. At a congressional hearing last week, Mnuchin said that company names and amounts of specific PPP loans are “proprietary” and “confidential” information that would not be revealed. He appeared to mildly soften that stance on Monday, tweeting that he would speak to the Congress about striking “the appropriate balance” between company oversight and protection of their information. Sen. Marco Rubio—who had previously vowed to make PPP loan details public—last week told CNN that the information might in fact constitute a “trade secret.”

The administration’s course reversal on PPP loan transparency is raising alarm with government watchdogs. On Monday, the inspectors general in charge of the Pandemic Response Accountability Committee (PRAC), a watchdog created by the federal government to oversee coronavirus relief spending, sent a letter to four congressional committees expressing their concern, according to the Washington Post.

The goal of the PPP program—administered by the Small Business Administration, with assistance from the Treasury Department—is to help small businesses cover payroll costs, keeping struggling companies afloat and their workers employed during the coronavirus crisis. But in the barely three months since its passage, PPP has come under repeated scrutiny for straying outside this mandate.

Quarterly financial filings in April and May revealed that publicly traded companies with multimillion-dollar market values—from luxury hotel companies to major restaurant chains—had obtained tens of millions in PPP loan money that, provided they adhere to the PPP program’s rules about payroll spending, they would never have to pay back. (Following press coverage and public outrage about these loans, many of these corporations promised to return their PPP funds.)

“My assumption is that there are many other examples like that which will reflect poorly on the administration, and the secretary is doing whatever he can to prevent that.”

The revelation that millions in PPP funds intended for small businesses had instead gone to major corporations triggered calls for better oversight of the federal agencies administering these loans. The course reversal on PPP loan transparency by Mnuchin and others in the Trump administration may be an attempt to avoid further backlash, says Liz Hempowicz, the director of public policy at the Project on Government Oversight, a watchdog that tracks government transparency.

“This PPP money is desperately needed by small businesses around the country,” says Hempowicz. “We’ve already seen many entities that were approved for these loans that don’t seem like the ones that Congress intended to benefit from them. My assumption is that there are many other examples like that which will reflect poorly on the administration, and the [Treasury] secretary is doing whatever he can to prevent that.”

In recent weeks, watchdogs and Democratic lawmakers have renewed their calls for PPP loan transparency by pointing to Section 7(a), the SBA loan program that PPP is nested under. The SBA has for decades released detailed information about recipients of these Section 7(a) loans—including company names and loan amounts.

In a letter to Treasury and the SBA on Friday, Rep. Katie Porter and Sen. Kamala Harris—California Democrats who have previously called for more robust oversight of coronavirus relief funds—wrote that PPP should be subject to the same disclosure as other Section 7(a) loans.

“Particularly after taking into account the nature of traditional 7(a) loans, which are not forgivable, versus PPP loans, which are forgivable, it is clear that the level of public scrutiny that historically accompanies 7(a) loans should be viewed as the absolute floor, in the context of the PPP,” they wrote.

What’s more, they noted, the PPP loan application form itself informed borrowers that information about approved loans, including the names of borrowers and amounts of their loans, would be “automatically released” under the Freedom of Information Act, a law that allows members of the press and the public to ask for records from federal agencies.

Since the SBA has so far declined to provide this information in response to FOIA requests, 11 news organizations are currently suing the agency.

“If they’re making the decision not to proactively release and instead forcing people to FOIA this information or to go to court to litigate it, they’re not saving the government any time, money, or effort,” says Hempowicz. “In fact, they’re increasing the burden on government to get this information out to the public.”