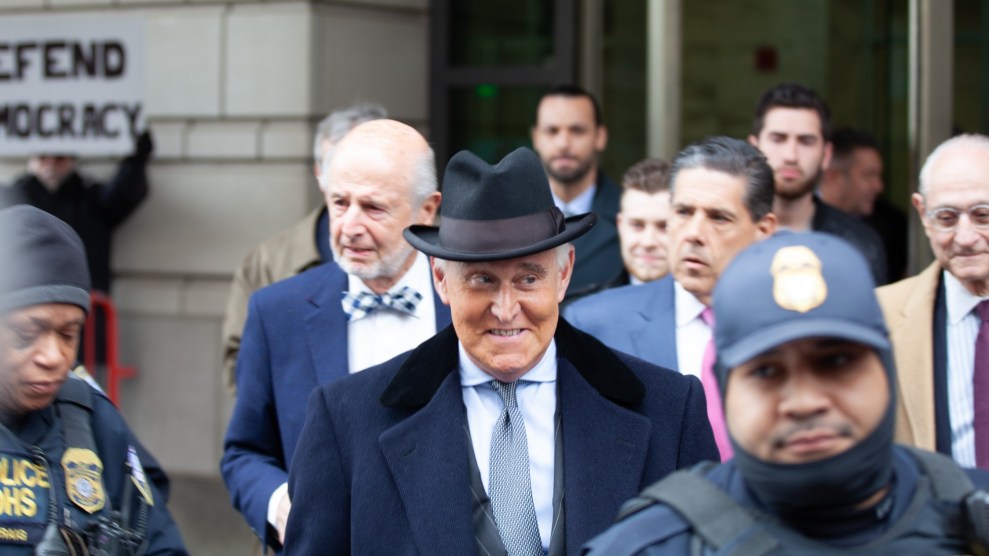 Roger Stone leaves court on Feb. 20, 2020 after being sentenced to 40 months in prison.Graham Macgillivray/Congressional Quarterly via ZUMA Press

The Justice Department said Friday that it plans to release by June 19 previously redacted portions of Special Counsel Robert Mueller’s April 2019 report that relate to longtime Trump adviser Roger Stone. The deadline falls 11 days before Stone, the longtime dirty trickster who was convicted last year of making false statements to Congress, is set to begin a prison sentence that President Donald Trump has indicated he will erase via pardon.

The timing matters. The portions of Mueller’s report related to Stone will likely indicate that the Trump campaign believed it was collaborating through Stone with WikiLeaks on the release of Democratic emails stolen by Russia. This information emerged during Stone’s November trial, but inclusion in the public version of the Mueller report would enshrine it in our most official record of Russian meddling in 2016.

The Trump campaign considered Stone an “access point to WikiLeaks,” former Trump campaign boss Steve Bannon testified during Stone’s trial. Without redactions, the report will presumably show that Trump personally communicated with Stone about WikiLeaks’ plans to release hacked emails and also ordered aides to communicate with Stone about WikiLeaks. Rick Gates, a former top campaign official, testified at the trial that he personally overheard Trump speaking to Stone by phone. After the call, Trump “indicated that more information would be coming” out, Gates claimed.

Trump told Mueller in written answers that he did “not recall discussing WikiLeaks with [Stone], nor do I recall being aware of Mr. Stone having discussed WikiLeaks with individuals associated with my campaign.” Given Trump’s extensive attention to WikiLeaks’ releases of hacked emails, it’s hard to imagine the president forgot having talked to Stone about WikiLeaks. He seems to have lied to Mueller about this.

The release of Mueller’s findings related to Stone, then, will highlight just how corrupt a pardon of Stone would be. He was convicted of falsely telling the House Intelligence Committee that he did not communicate with the Trump campaign about WikiLeaks, among other false statements. Those communications regarding WikiLeaks occurred at the same time Russian intelligence was using the organization to release material stolen from Democrats in a bid to help Trump win the election.

Trump benefited from the timing of Stone’s arrest, which came in January 2019, toward the end of Mueller’s probe. This meant that Stone’s trial came after the April 2019 release of the Mueller report. As a result, information Mueller uncovered about Stone and WikiLeaks was redacted in the report due to potential “harm to ongoing matter.” By the time Stone’s trial happened, Trump and Attorney General William Barr had enjoyed substantial success in falsely spinning the report as having exonerated Trump. Stone’s trial contained major revelations about Trump campaign efforts to coordinate with WikiLeaks. But this news came amid media intense focus on impeachment hearings related to Trump’s improper efforts to pressure Ukraine. By then most Americans had made up their minds on Trump–Russia and moved on.

The Justice Department agreed to release information related to Stone only after a Freedom of Information Act lawsuit by Buzzfeed reporter Jason Leopold and the nonprofit Electronic Privacy Information Center. The suit noted that Stone’s conviction removed the cause DOJ had cited for redacting the Stone material in Mueller’s report. This release will highlight the extent to which Stone’s crimes helped to cover up Trump’s conduct. That is unlikely to stop Trump from pardoning Stone. It might even encourage the president to move faster. But it ought to make clear that in pardoning Stone, Trump would be protecting not just his old political consigliere but himself.