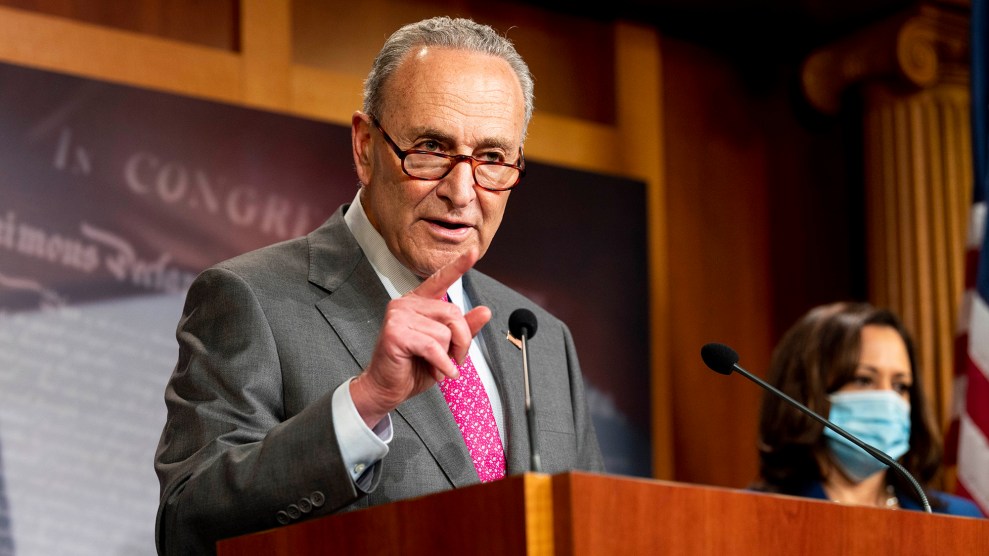 As temporary enhancements to unemployment benefits are set to sunset at the end of July, Senate Democrats are proposing a permanent extension, one that would automatically adjust with changing economic conditions, marking a leftward shift among the party’s leadership as it navigates the country’s economic recovery in the face of the pandemic.

“What we’ve seen is wealth and income disparity, and the pandemic crisis has exacerbated that problem,” Schumer tells me. “This undoes a giant hole in the safety net.”

These automatic stabilizers would address a pernicious problem Democrats have faced as they’ve tried to extend the unemployment boost: The need to continually renegotiate benefits in the face of the pandemic’s ever-changing economic outlook. So far, Senate Majority Leader Mitch McConnell (R-Ky.) and the Trump administration have resisted attempts to keep the benefits going—even though the unemployment rate has ballooned since Congress passed the emergency relief bill that included these provisions in late March, currently at 13.3 percent.

Given those political realities, this bill likely won’t pass Congress. But it’s significant that Democratic leadership is embracing automatic stabilizers, which have been championed mostly by progressive economists and lawmakers. Schumer’s proposal has won the praise of economists such as Stephanie Kelton, a former adviser to Sen. Bernie Sanders (I-Vt.) who has often been at odds with mainstream Democratic thinking. “The politics make it difficult to do the right thing,” Keltons says. “If you can make the decision making automated so its contingent on changing economic realities rather than changing political winds, you’ll get better, more responsive policymaking,” Kelton says.

Schumer cites the influence of Heather Boushey, the president of the left-leaning Washington Center for Equitable Growth who co-leads Joe Biden campaign’s economic policy working group. Boushey wrote a book, Recession Ready, about how automatic stabilizers could prepare the US economy for the next recession. Indivar Dutta-Gupta, the co-executive director of the Georgetown Center on Poverty & Inequality who contributed to Boushey’s book and also co-leads Biden’s economic policy outreach, has been meeting with a separate group of roughly a dozen liberal economists and advocates to develop a political strategy around advancing automatic stabilizers among congressional Democrats and the Biden campaign.

Schumer says he plans to ask Biden to back his proposal; the Biden campaign declined to comment on whether it would. But if it was law, it would spare a would-be President Biden having to spend his limited political capital on negotiating unemployment benefits if he takes office in January.