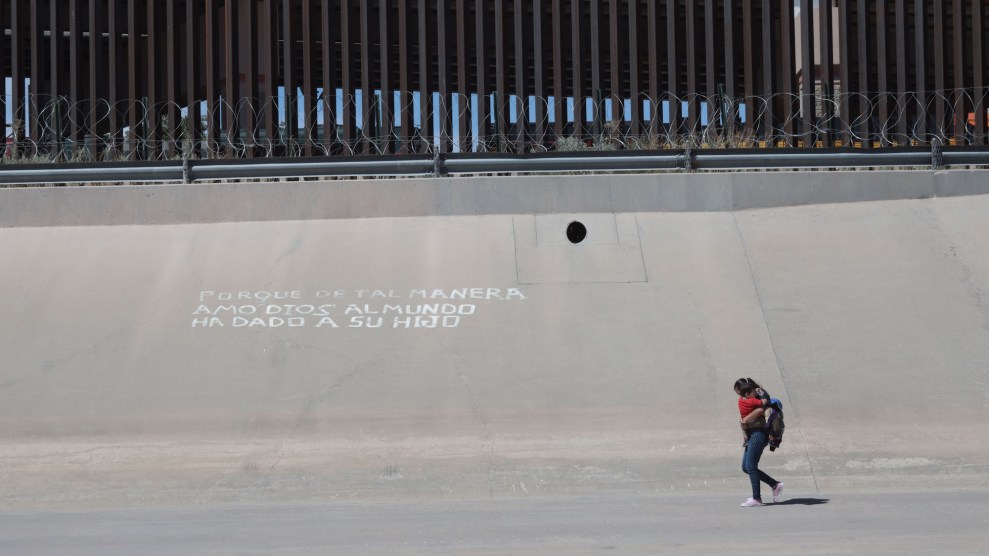 During the 2014–2015 school year, Caleigh Wood started to learn about Islam as part of her 11th grade world history class. Upon discovering this, Caleigh’s dad, John, wrote on Facebook that he “just about fucking lost it,” adding in response to a commenter, “A 556 round [of ammunition] doesn’t study Islam and it kills them fuckers everyday.” John told the school’s vice principal that “you can take that fucking Islam and shove it up your white fucking ass,” according to federal court records. After saying that he was going to create a “shit storm like you have never seen,” he got banned from the La Plata, Maryland, high school.

That could have been the end of the story. Instead, Brandon Bolling and other lawyers from the Thomas Law More Center, a right-wing Christian group that declares itself “battle ready to defend America,” represented John as he sued the Charles County public school system for allegedly attempting to indoctrinate his daughter into Islam.

Last week, the Justice Department announced that it had hired Bolling, a former Marine and federal attorney, to be an assistant chief immigration judge in Texas, even though he has no discernible immigration experience. During two stints at the Thomas More Law Center—neither of which is disclosed in his government bio—Bolling worked on numerous cases that pitted his clients against Muslims and the gay community. Now Bolling will help oversee the immigration cases of people detained in El Paso, and could be responsible for deciding whether victims of persecution based on their religions and sexual orientations receive protection under US asylum laws.

Bolling is one of 46 new immigration judges recently hired by the Trump administration. Another is Matt O’Brien, who served as the research director for the Federation for American Immigration Reform, one of the country’s leading anti-immigrant groups. The decision to hire both men is an escalation of the Trump administration’s efforts to select judges sympathetic to its anti-immigration agenda. (The Justice Department’s Executive Office for Immigration Review and the Thomas More Law Center did not respond to requests for comment.)

As part of the Justice Department, immigration courts lack the independence of federal courts. The decisions they make can determine whether immigrants who have been in the United States for decades can remain, or whether asylum seekers will be deported to the countries they fled. Even when immigrants appeal their decisions, they generally stick, since the Trump administration has made a point of filling the Board of Immigration Appeals with judges known for denying nearly all asylum claims.

When the Thomas More Law Center first hired Bolling more than a decade ago, the center’s president, Richard Thompson, highlighted Bolling’s tours during Operation Enduring Freedom. “I have a bias for lawyers with combat backgrounds,” Thompson said. “They make great lawyers in the Culture War.”

John Wood wasn’t the first Marine who Bolling represented in a lawsuit targeting Islam. In 2008, Bolling, another Thomas More attorney, and David Yerushalmi—“The Man Behind the Anti-Shariah Movement,” in the words of a New York Times headline—filed a complaint on behalf of a former Marine named Kevin Murray in a suit against then–Treasury Secretary Henry Paulson. The suit alleged that the federal government violated the First Amendment by acquiring a stake in the finance and insurance giant AIG as part of its response to the financial crisis. The lawyers argued that AIG engaged in “Shariah-based Islamic religious activities that are anti-Christian, anti-Jewish, and anti-American” by offering some insurance products that complied with tenets of Islamic religious law governing lending and borrowing in order to serve Muslim clients. Eugene Volokh, a law professor at the University of California-Los Angeles, pointed out at the time, “The government no more cares about advancing Shariah through the AIG bailout than my local Ralphs supermarket cares about advancing kosher laws by selling products that are certified kosher.”

But the lawsuit claimed that the “government’s endorsement of Islamic law sends a message to [Murray]…that he is an outsider, not a full member of the political community.” Murray’s lawyers wrote that “the theo-political doctrine of Islam is contrary to the dictates of the First Amendment’s religion clauses” and that jihad was a way to “gain political control and exercise Islamic authority over a population.” The word “infidel” appeared seven times in their complaint. Not surprisingly, a judge dismissed the suit. (Bolling was no longer at Thomas More at the time.)

Bolling also took aim at homosexuality and sex education. In 2008, Bolling challenged the sex education curriculum of Montgomery County, Maryland, on behalf of plaintiffs including a group called Parents and Friends of Ex-Gays. A Thomas More press release stated that the lawsuit objected to the notion that “homosexuality is innate—meaning they are born that way.”

John Wood didn’t fare much better than Parents and Friends of Ex-Gays. Judge George Hazel concluded that Caleigh’s Christian teacher did not have a secret Muslim indoctrination plot. “[T]he First Amendment does not afford the right to build impenetrable silos, completely separating adherents of one religion from ever learning of beliefs contrary to their own,” Hazel concluded in favor of the school district. “Nor, in this Court’s view, does it prohibit a high school teacher from leading a purely academic study of a religion that may differ from the religious beliefs of some of his students.”