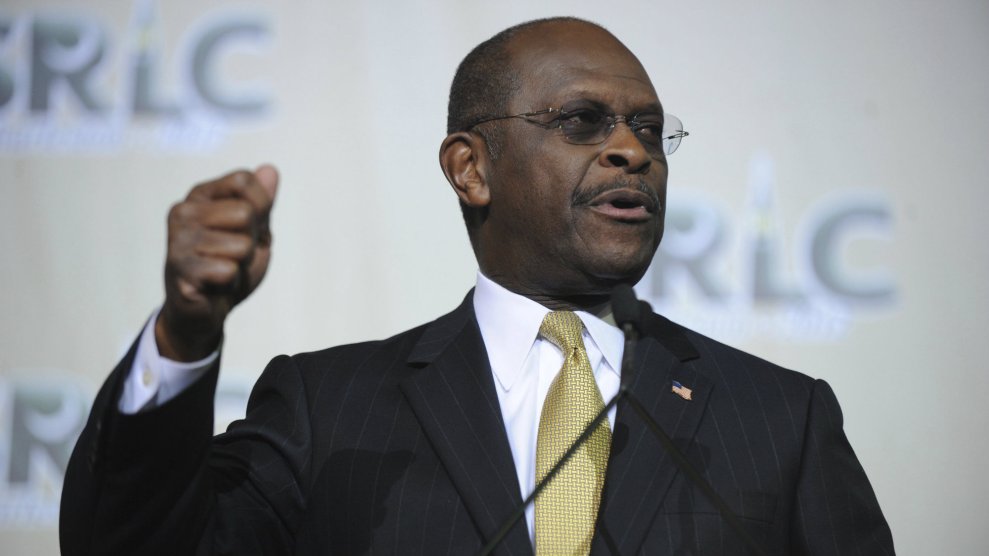 Herman Cain, the former presidential candidate and top Donald Trump surrogate as one of the leaders of the group Black Voices for Trump, died from the coronavirus on Thursday. The 74-year-old former pizza mogul had been hospitalized for a month, announcing that he’d been infected with the virus less than two weeks after attending the president’s infamous indoor rally in Tulsa, Oklahoma, on June 20. Cain was pictured with several other prominent Black Trump supporters with the signature maskless faces.

For weeks after the rally and his diagnosis, regular tweets from Cain’s Twitter account gave the impression of someone still very much engaged in the effort. And now he has died. As with the passing of nearly every public and sometimes controversial person, there were calls not to politicize his death. But why should we ignore a critical variable that has contributed to his death and the deaths of more than 150,000 less prominent others from the coronavirus? And that variable is politics.

We will never know if attending Trump’s Tulsa rally, where more than 6,000 people gathered in an indoor stadium with very little social distancing and mask wearing in a state where the coronavirus was surging, sealed his fate. But it’s probably safe to say it didn’t decrease his chances of contracting the deadly virus. Oklahoma public health officials urged the campaign to postpone the rally until it was safe. Obviously that didn’t happen. More important, the act of attending it without a mask and pressing up against other Trump supporters against the advice of public health officials and local leaders was a political act.

The Blaze, a right-wing media company, quickly published a story feigning horror at how liberals were already politicizing Cain’s death. But let’s be clear, politics contributed to Cain’s death, and it’s much too late for conservatives to claim that this disease and its tragic outcomes should now be apolitical. From the very beginning, they turned the coronavirus, which has killed 151,000 people and infected more than 4 million others, into a partisan cause. First, there were the conservative pundits and the president himself who claimed that Democrats were using the virus to ruin Trump’s chances of reelection. Then, there were the “lockdown protesters” who claimed essential public health restrictions for containing the spread of the virus were impeding their constitutional right to get a haircut. And that doesn’t even include the xenophobic blame cast on Chinese people for the virus, with Trump’s repeated references to the “China virus.” Or the determination to sideline the Centers for Disease Control and Prevention or science-based evidence out of concern of hurting the president’s fragile ego.

Once it became evident that the virus was a very serious problem, Trump acolytes suggested that older people, like Cain, should face death with equanimity.

Once it became evident that the virus was a very serious problem, Trump acolytes suggested that older people, like Cain, should face death with equanimity, knowing that they might contribute to saving the economy and their grandchildren’s future. Trump also withheld desperately needed medical supplies from states with Democratic governors. Treatments became political as well. Hydroxychloroquine, an anti-malarial drug, was touted by the president without evidence as having curative powers for the virus and received emergency use authorization use by the Food and Drug Administration. But after several studies showed that it could be dangerous for certain patients, the FDA revoked the emergency use authorization. Undeterred, Trump and other conservatives touted its use to combat the virus, claiming liberals were against it because it would help the president. Even reopening the economy was politicized, with Trump threatening to withhold federal aid from states that didn’t reopen their schools and businesses.

Ever the loyal soldier, in the days leading up to Cain’s announcement that he had contracted the coronavirus, on his personal website and Twitter feed, the pizza magnate continued to downplay its seriousness.

Never again. We now have the evidence it didn't help at all. #Coronavirus https://t.co/57n1VphXak

The day after he was hospitalized, his personal website, HermanCain.com posted a blog about a study that showed hydroxychloroquine has positive affects on coronavirus patients, despite most experts saying that it doesn’t. The post says that the only reason it’s even doubted as a drug to fight COVID-19 is because the president is for it. When the Miami Marlins, a major league baseball team, announced an outbreak among players, Cain’s blog thought it was good that the league didn’t panic “like the media wanted.”

This was posted three days before his death.

The same day Cain’s death was announced, Rep. John Lewis, who died earlier this month from pancreatic cancer, was laid to rest. Lewis’ death was political in the best kind of way. The civil rights hero spent his life fighting for voting rights, notably getting brutalized by Alabama State Troopers in 1965. As Republicans sought to align themselves with the civil rights hero despite blocking everything he fought for, elected officials, and other activists demanded they explicitly politicize his death by passing voting rights legislation that has been idling on Mitch McConnell’s desk since December. In a posthumous op-ed in the New York Times, Lewis wrote a call to action. “Democracy is not a state,” he wrote. “It is an act, and each generation must do its part to help build what we called the Beloved Community, a nation and world society at peace with itself.”

How far away we are from Lewis’ dream for the nation. Today, America has the dubious distinction of being the country most financially-equipped to handle a pandemic, but the most politically incompetent. The Republican party has all but given up on providing relief, and we’re running out ways to describe the economic cliff we’re barreling toward because there’s hardly anything to compare it to. This summer’s outbreak is worse than the outbreak in the spring. Nobody knows what will happen when schools start reopening and COVID-19 coincides with flu season. Instead of handling the virus with the guidance of science and expertise, Trump treated the virus like one big political game. How can one not politicize the tens of thousands of deaths the partisan actions of Trump and his Republican enablers have caused?

In a way, Cain was Trump before Trump. His 2012 presidential campaign was marked by xenophobia and was eventually upended by allegations of sexual misconduct. On Thursday afternoon, Trump paid tribute to Cain on Twitter, calling him a “powerful voice of freedom” and a “great friend.” He did not mention the cause of his death. At a press conference that evening, however, Trump did say that Cain died from the “China virus.”

Trump on Herman Cain: "Unfortunately, he passed away from a thing called the China virus." pic.twitter.com/W3Px3FwL1R