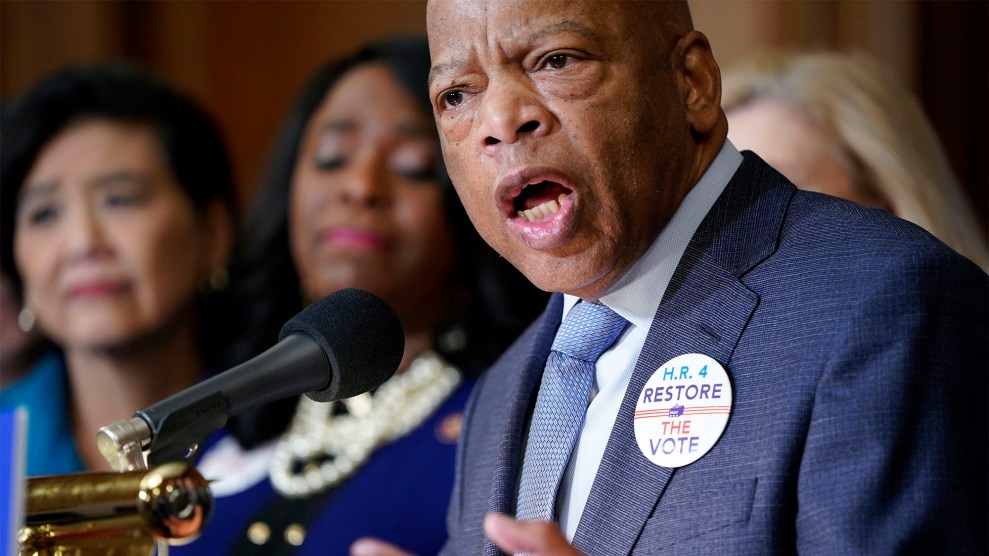 In a posthumous op-ed published in the New York Times to coincide with his funeral on Thursday, John Lewis wrote about the importance of the right to vote but also warned of the danger it faces.

“Voting and participating in the democratic process are key,” wrote Lewis, the civil rights icon and longtime congressman from Georgia who passed away on July 17. “The vote is the most powerful nonviolent change agent you have in a democratic society. You must use it because it is not guaranteed. You can lose it.”

Hours after Lewis’ article was published, President Trump suggested in a tweet that he might delay the 2020 election, dramatically escalating his massive disinformation campaign against voting by mail.

With Universal Mail-In Voting (not Absentee Voting, which is good), 2020 will be the most INACCURATE & FRAUDULENT Election in history. It will be a great embarrassment to the USA. Delay the Election until people can properly, securely and safely vote???

Trump’s tweet is nonsense. For starters, the president doesn’t have the authority to postpone the election—Congress does. Second, there’s no evidence of widespread vote-by-mail fraud—the conservative Heritage Foundation found only 143 criminal convictions for mail ballot fraud over the past 20 years, a rate of .000006 percent. Third, Trump and 15 other top administration officials, including the vice president and attorney general, have voted by mail in the past.

But Lewis was right to be concerned about the threat to voting rights. Since the 2010 election, half the states in the country have passed new restrictions on voting, such as voter ID laws, cutbacks to early voting, and closing polling places. In 2013, the Supreme Court gutted the Voting Rights Act, unleashing a wave of new voter suppression in states with a long history of discrimination like Georgia and Texas. (Senate Majority Leader Mitch McConnell has been blocking a vote on bipartisan legislation to restore the VRA for most of a year.)

More recently, the Trump administration has waged an unrelenting campaign against vote-by-mail, lying about mail ballot fraud and filing a series of lawsuits opposing efforts to make it easier to vote by mail. He has also politicized the United States Postal Service by appointing the former top fundraiser for the Republican National Committee as postmaster general, cutting overtime for postal workers, and slowing down mail delivery at a time when the agency faces a major budget crisis, which could lead to mail ballots not arriving in time to be counted. All of these efforts have erected new barriers to mail voting at a time when the country will cast mail ballots in unprecedented numbers during a pandemic with no end in sight.

Lewis nearly died marching for the right to vote in 1965. Trump seems more determined than ever to undermine that right.