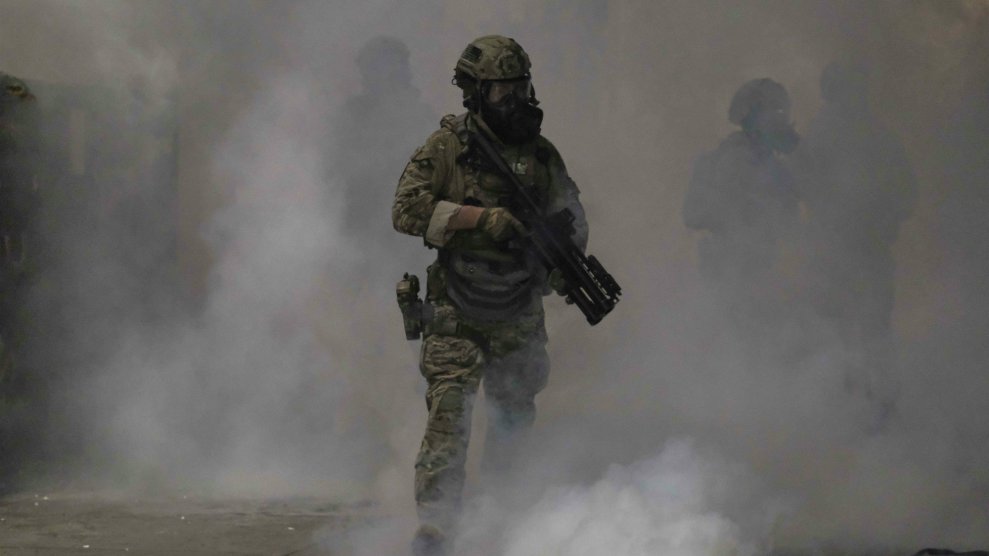 Every day, reports of unmarked vans with unidentifiable law enforcement agents rounding up protesters in Portland, Oregon, are going viral. Many of those who were detained said they weren’t doing anything illegal. Last week, one man described being blindfolded, taken to a federal courthouse, and read his rights. After he asked for a lawyer, the officers released him. Several news outlets confirmed that the Department of Homeland Security had sent Customs and Border Patrol agents to the city. After widespread outrage and shock, with city and state leadership asking for federal agents to leave, acting DHS head Chad Wolf posted a now-deleted tweet depicting graffiti on the federal court and using this as justification for the presence of federal agents. Instead of trying to make up a reason that could sound plausible, or even denying that there was anything questionable about the behavior of CBP agents, Wolf he claimed he didn’t need permission from the state or locality to be there and had no intention of retreating.

"I don't need invitations by the state, state mayors, or state governors to do our job. We're going to do that, whether they like us there or not.” — acting DHS Secretary Chad Wolf pic.twitter.com/Rr2P8q6Ut1

But Portland was only the first stop. President Donald Trump announced that DHS would be taking its operations nationwide. “We’re not going to let New York and Chicago and Philadelphia and Detroit and Baltimore and all of these—Oakland is a mess,” he said at a press conference in the Oval Office on Tuesday. “We’re not going to let this happen in our country. All run by liberal Democrats.” Because violent crime has gotten so bad in every major city, his reasoning went, a massive deployment of intimidating federal agents was the only solution. The president was relying on a debunked myth that blames increases in crime on protests against police brutality, which then justifies sending in American troops to invade their own country.

Just these facts are all appalling. It’s no secret that unconstitutional police stops and other illegal law enforcement activities have been a regular facet of life for decades (see stop-and-frisk in New York City and Chicago police’s black sites). And these are the very actions that are under scrutiny during this time of a national reckoning with the role and practices of police forces. But now, those actions are amplified by federal troops courtesy of the government.

That this is happening during a pandemic adds a gruesome new and unintended twist. More than 140,000 people have been killed by the coronavirus and millions more have been infected. While Trump and his cronies seem particularly obsessed with crime in certain major cities, they have unshackled themselves from the responsibility of providing coherent government leadership during a public health crisis to disastrous effect.

They have unshackled themselves from the responsibility of providing coherent government leadership during a public health crisis to disastrous effect.

How do Republicans thread the needle here? They champion the states rights conservative ideology when it comes to wearing masks to contain a pandemic, while proudly deploying federal troops to deal with a local problem. Clearly, figuring out the extent and the limits of federal responsibility through lens of Trump era conservative ideology may be a futile exercise.

As the coronavirus resurges in most states across the country, most public health officials have repeatedly said that widespread testing will only work with federal support. Jennifer Nuzzo, a health security expert at Johns Hopkins University, told the Washington Post that without a federal strategy to identify and fix issues, we’re left with “janky flotilla” held together by duct tape and glue. But Trump and his cronies have decided that it’s a state responsibility. In April, when there were approximately 58,000 deaths, the White House said that the federal government was a “supplier of last resort.” The number of deaths has nearly tripled. The federal government continues to do nothing about a national testing strategy.

The incoherence of conservative ideology arises everywhere. The federally enhanced unemployment benefits are scheduled to expire at the end of the month, but talks to expand them and offer more virus-related relief such as another round of stimulus checks and aid for states were stalled because certain Republican senators were aghast at the thought of spending more money on regular Americans. When a reporter asked Senate Majority Leader Mitch McConnell (R-Ky.) if they were going to be able to come to a deal to assist the 16 million workers still receiving benefits before July 31. McConnell let out a big laugh and said, “No.”

In contrast, this month the president suddenly realized that children typically go to school in the fall, and he started hammering on states to fully reopen classrooms, despite the risks of students, teachers, school staffers, and their families getting ill—or dying. Instead of offering a comprehensive plan and the funding to keep students as safe as possible, Trump merely threatened to withhold funding if they kept their doors shut while undermining the advice of his own Centers for Disease Control on safety requirements for opening schools. In fact, when critics and school boards declared that, according to science, they couldn’t reopen, Kayleigh McEnany urged them not to let science get in the way.

The federal government is willing to protect you from mythical hordes of Antifa super soldiers coming to tear down Confederate statues. It will not protect your child from contracting a deadly virus.

It’s a curious leadership, not to mention electoral, strategy. But if you are looking for something consistent and coherent in this mess, there actually is: The Trump administration has turned demonizing the opposition, or owning the libs, into federal policy. In April, when states were scrambling for personal protective equipment and ventilators, Trump rewarded his allies, like Florida Gov. Ron DeSantis, with supplies while his so-called opponents such as Illinois Gov. J.B. Pritzker and California’s Gavin Newsom were left to fend for themselves. Most Democratic governors and mayors oppose Trump’s plan to flood cities with secret federal police. But if they’re against it, he’s for it. “My first duty as President is to protect the American people,” Trump said at yet another press conference on Wednesday afternoon. Just not from the virus, apparently, or the violation of their constitutional rights.