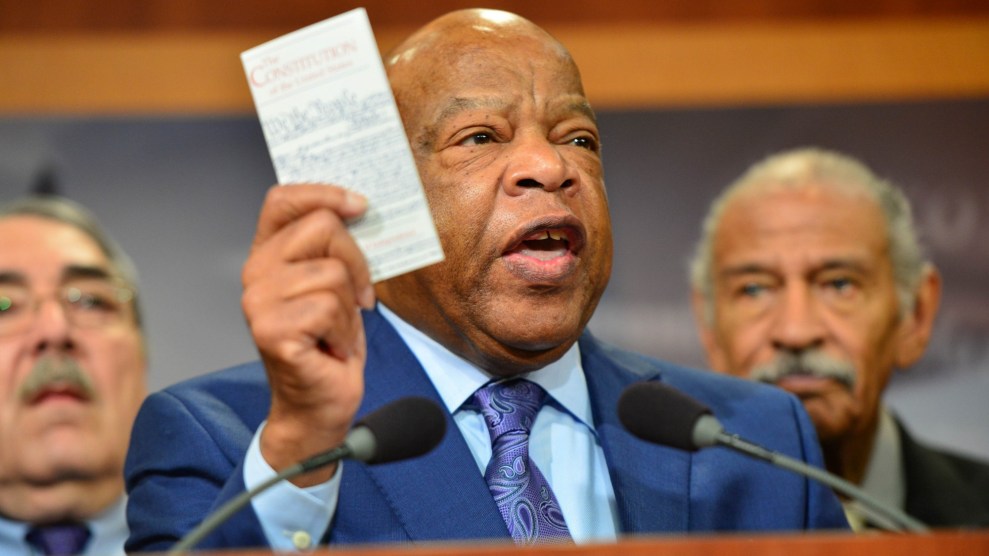 John Lewis holds a copy of the U.S. Constitution at an event urging Senate Republicans vote on a Supreme Court nominee on March 3, 2016.Us Senate/Planet Pix via ZUMA Wire

Not long after the passing of John Lewis, tributes began pouring in from all points on the political compass, including some from ardent foes of the goals Lewis championed right up to his death on Friday. Vote suppressors praised the work of a public servant who had devoted his career to securing voting rights in America. Cop enablers praised a man who was nearly killed by a state trooper’s truncheon on the Edmund Pettus Bridge in 1965. The hypocrisy was too much to bear.

Below are a few of the worst offenders.

The praise: McConnell on Saturday called Lewis “a pioneering civil rights leader who put his life on the line to fight racism, promote equal rights, and bring our nation into greater alignment with its founding principles.”

I will never forget joining hands with John as Congress sang We Shall Overcome at a 2008 ceremony honoring his friend Dr. Martin Luther King, Jr. It could not have been more humbling to consider what he had suffered and sacrificed so those words could be sung in that place.

Why that’s so rich: The GOP leader is blocking action on voting rights legislation that Lewis championed, including a bill to restore key protections for voters that the Supreme Court removed in its 2013 Shelby County v. Holder ruling. Shelby County is in Alabama, the state where state troopers fractured Lewis’ skull in 1963 as he marched against poll taxes and other methods used to stop Black Americans from voting. As it was during the civil rights movement, the Senate is no ally to the cause; it’s the thing to overcome.

The praise: On Friday night, Loeffler, a Republican appointed to a Senate seat in Lewis’ home state of Georgia, tweeted about Lewis: “Few people have his grit, tenacity or courage. Georgia & our entire nation are better because of his leadership & courage.”

The passing of John Lewis is a tremendous loss for America. Few people have his grit, tenacity or courage. Georgia & our entire nation are better because of his leadership & courage.

May God comfort his loved ones during this difficult time.

Why that’s so rich: One way Lewis showed grit was by appearing last month with DC Mayor Muriel Bowser at the newly named Black Lives Matter Plaza in Washington, DC. Battling cancer, Lewis, in some of his last public remarks, celebrated the Black Lives Matter movement and praised recent demonstrations.

Loeffler, meanwhile, has capitalized on her ownership of a WNBA team in Atlanta, Lewis’ hometown, to push the league to stop its players from putting “Black Lives Matter” and “Say Her Name” slogans on their uniforms. “We need less—not more politics in sports,” Loeffler wrote in a letter to the league’s commissioner. “In a time when polarizing politics is as divisive as ever, sports has the power to be a unifying antidote.”

The praise: In a statement on Saturday, Kemp called Lewis “a Civil Rights hero, freedom fighter, devoted public servant, and beloved Georgian who changed our world in a profound way.”

Congressman John Lewis was a Civil Rights hero, freedom fighter, devoted public servant, and beloved Georgian who changed our world in a profound way. The Kemp Family is praying for his loved ones as they honor his life & mourn his passing. #RIPJohnLewis https://t.co/PnbhMCTHz9

Why that’s so rich: Running for governor in 2018, Kemp, as Georgia’s secretary of state, purged the state’s voter rolls. The move constituted an epic conflict of interest, reduced the number of eligible Black voters, and helped Kemp defeat Stacey Abrams.

The praise: Rubio on Saturday tweeted a picture of himself with a person he apparently thought was John Lewis. It was actually the late Rep. Elijah Cummings.

marco rubio's tweet about john lewis – which is now his profile pic – is a photo of elijah cummings. pic.twitter.com/S5N53I2tRI

Rubio, undaunted, corrected the error, displaying a picture of himself with the correct deceased Black guy and the words: “John Lewis was a genuine American hero.”

Why that’s so rich: Rubio in the past hasn’t much cared about voters waiting in line for hours to vote, a problem that tends to occur in heavily Black and Democratic areas in Republican-run states. Asked in 2016 by a voter about six-hour lines to vote in Miami, Rubio responded: “That is only on Election Day.”

The praise: The libertarian Cato Institute on Saturday tweeted a January article by one its scholar headlined “John Lewis, Libertarian Hero.” The article says that the right to vote, which Lewis championed, is a libertarian cause, which, yeah, OK, sure.