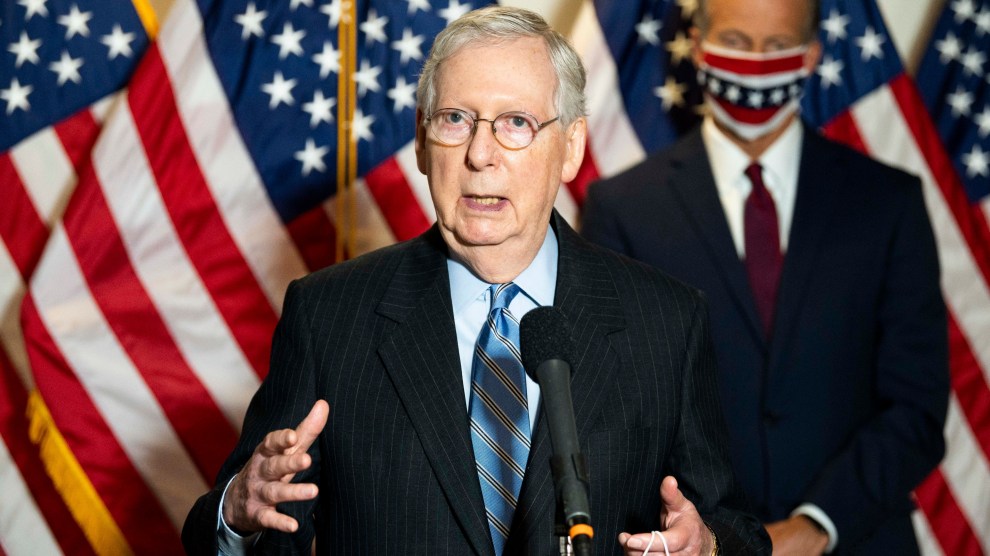 Congressional Republicans and White House officials have argued against extending the weekly $600 unemployment boost, which expired at the end of last month, by claiming that it paid people more than they were making at their jobs. A study released Wednesday suggests that for most Americans, that isn’t true.

In June, Larry Kudlow, director of the National Economic Council, called the $600 checks a “disincentive” to work—a word later repeated by several GOP senators and by the president himself. Senate Majority Leader Mitch McConnell called the checks “a bonus not to go back to work.” Central to Republican claims is a study from University of Chicago economists, published in May, which found that 68 percent of unemployment recipients would earn more with the $600 weekly benefit than they did at their jobs. Sen. Rob Portman (R-Ohio) cited the Chicago study in a June press release, in media interviews, and on the Senate floor this week, as did Treasury Secretary Steven Mnuchin in a Sunday interview.

But an analysis published Wednesday by the left-leaning Groundwork Collaborative and the National Employment Law Project (NELP) finds that the majority of recipients are likely making less than before because they’re now paying for benefits that were previously offered by their employers, including health care, leave, and retirement benefits. The Chicago study did not factor these benefits into its analysis, instead looking exclusively at earnings.

“Our inclusion of non-wage compensation is driven by our concern that measures of wage compensation do not paint a complete picture of all that workers lose when they are laid off,” write the study’s authors, Michele Evermore of NELP and Marokey Sawo of the Groundwork Collaborative.

The pair used Bureau of Labor Statistics data that tracks the previous industries of unemployment recipients, as well as BLS data that estimates the total cost of workers to employers in both salary and benefits across industries. With these data sets, they were able to calculate the average hours of work per week in different industries, what sort of total compensation (salary and benefits) workers in these industries would have made on the job, and how that amount compares to the average benefit unemployment claimants are now receiving.

After crunching these numbers, they found that about 60 percent of unemployment claimants had worked in industries where the average total compensation was higher than what they’re collecting through unemployment. “In short, the majority of unemployed Americans could be doing worse, not better, financially in unemployment,” write the authors.

“We know for a lot of workers, your wages aren’t the only way you get compensated,” says Sawo. “If you look at overall economic wellbeing, [unemployment] benefits are not this great windfall that we’ve been saying to justify the disincentives argument.”

“In short, the majority of unemployed Americans could be doing worse, not better, financially in unemployment,” write the authors.

Theirs is just the latest study to poke holes in the notion that the $600 unemployment boost is a work disincentive. Research by Yale University economists found that the extra payments did not deter people from returning to work. Another analysis by economists at the University of Pennsylvania, the Federal Reserve Bank of New York, and work search company Glassdoor found that employers did not have greater trouble finding workers to fill their vacancies after the passage of the extra $600—in fact, applications per vacancy increased.

Congress continues to negotiate a coronavirus relief bill this week, with unemployment benefits as one of the biggest sticking points. Last week, Republicans proposed lowering the $600 benefit to $200 per week temporarily, and then even further after September. After additional debate with Democrats, they are now reportedly considering a package that would make the benefit $400 per week. Democrats don’t want to budge on the $600, and most senators are likely to leave Washington on Thursday, leaving the deal-making to party leaders and the White House. The last $600 payments went out to unemployment recipients last week. Whatever numbers Congress eventually settles on will take weeks to work their way into aging and overwhelmed state unemployment systems and eventually household bank accounts.

NELP’s Evermore says this delay in benefits, coupled with the fact that, per their findings, many people were already making less on unemployment, will require families to make difficult spending choices that can cause long-term damage.

“This is exactly what we see happen in recessions, particularly when we cut off aid too quickly,” says Evermore. “People make decisions now that end up hurting them for the rest of their lives, because they’re given a series of bad things to pick from: Do I not pay rent and maybe get kicked out? Or do I take my medicine?”