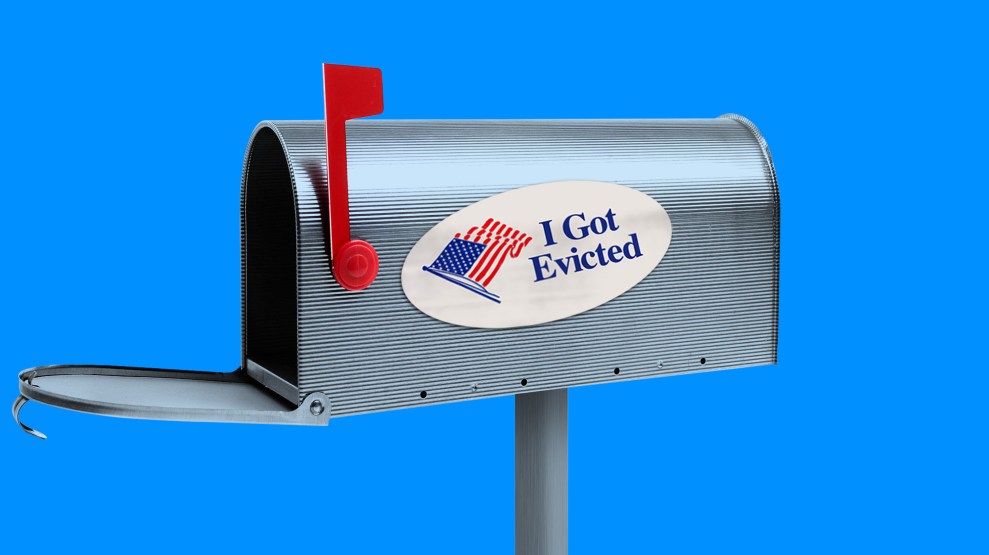 As if a pandemic and a postal crisis weren’t enough, here’s one more catastrophe that could prevent many Americans from voting this fall: an upcoming wave of evictions.

For months, housing experts have predicted a flood of evictions, brought on by the coronavirus-battered economy and record-high unemployment. So far, it’s been mostly staved off by the weekly $600 unemployment boost and federal and state eviction moratoriums enacted at the start of the pandemic. But now that most of these protections have lapsed and negotiations in Congress to reinstate them have stalled, the eviction crisis is likely to ramp up in the months ahead of the November election.

The result, say housing advocates and voting experts, will be a troublesome confluence of events: an election that will depend more than ever on mail-in ballots that arrive at people’s doorsteps, at the same time as an uptick in evictions from the addresses where households are set to receive their ballots.

“We may see large-scale evictions taking place in the weeks ahead of the election, which could effectively disenfranchise a large segment of the population,” says Brian Miller, the executive director of Nonprofit VOTE, a nonpartisan group focused on increasing voter engagement. “Those who are being most impacted by the COVID crisis may end up being largely excluded from the democratic process as a result.”

Projections by researchers using Census Bureau data have found that between 11.7 million and 13 million households are at risk of eviction before the end of the year. There was an average of just 3.6 million evictions per year between 2000 and 2016, according to estimates by the Eviction Lab at Princeton University.

For the most part, evicted citizens will still be able to vote by mail; it’ll just be a lot harder, depending on where they live. Vote-by-mail processes fall into three broad buckets. Nine states and the District of Columbia will automatically mail ballots to all registered voters ahead of the election. (Five of those states conducted their elections mostly by mail before the pandemic as well.) In response to the coronavirus, 35 states have tweaked regulations to make voting by mail easier: In each of those states, anyone can request and receive an absentee ballot without providing a reason or simply by listing fear of COVID-19 as their excuse. In the remaining six states, voters can receive an absentee ballot only if they provide an accepted excuse for voting by mail—and the pandemic doesn’t cut it.

“We may see large-scale evictions taking place in the weeks ahead of the election, which could effectively disenfranchise a large segment of the population.”

Miller is concerned that many evicted residents simply won’t vote because of the complicated logistics behind most mail-in voting efforts. In 41 states, there’s a two-step process to get an absentee ballot: Residents first request their ballot, then wait to receive it. Evictions are likely to pose the most voting problems in these states, Miller explains. Residents may request the ballot to their current address, but then be gone from the address by the time it arrives.

“Then you have to proactively search out your ballot somewhere,” he says. “Call the elections office. You could still get it, but you have to jump through some hoops. It just gets muddier.”

“If evictions pick up, it will be a problem for people who would like to vote by mail,” says Bob Brandon, president of the Fair Elections Center. “Their options are just narrower. The closer it is to the election, the more likely it is that they’re not going to be able to change where they get their ballot.”

In most states, the cutoff to request a new mail-in ballot is less than 30 days before the election. If registered voters miss their state’s cutoff, they’re stuck with in-person options: voting at the polls or, in some states, picking up a mail-in ballot from the local election board. Both could be undesirable for people who don’t want to expose themselves to the pandemic, says Brandon.

For those who can’t get a mail-in ballot and do choose to vote in person, a recent change in address should not prevent them from voting at the polls. In the District of Columbia and the 21 states that have same-day voter registration, a resident can register a new address at the polling place, even if it’s just a temporary place to stay, such as a friend’s house. People who have become homeless need not even list a permitted address—they can list a cross street. The federal voter registration form, which voters can use to register in all but three US states, includes a blank map with a pair of unlabeled intersecting streets where voters can write in the street names of the crossroads nearest to where they are staying. In the states where same-day voter registration is not an option, residents can vote using their old address, provided it has been less than 30 days since they left.

But despite the existence of these options, Brandon is concerned that the complexity and variability across state laws will deter voters who have been displaced.

‘We worry about making sure that people understand all their options,” Brandon says. “Nobody should be unable to vote because they lost their previous address. They should always have an option. The laws vary from state to state. The biggest issue is going to be making sure people understand at a time when they’re probably more worried about the fact that they just lost their apartment or their house.”

That’s the reality that Zach Neumann, who runs the COVID-19 Eviction Defense Project, has encountered since starting the organization this spring in response to housing issues presented by the pandemic. One of the group’s functions is providing legal aid to tenants facing displacement in Colorado, where his group is based. The issue of how to vote in November after an eviction is one that his organization is concerned about—but not one that his clients bring up. “This is a real concern for us,” he says. “But for tenants who are actually facing displacement, either through eviction or through moving because of economic reasons, this is just not even on their radar, because the magnitude of what they’re confronting is so significant.”

“For tenants who are actually facing displacement, this is just not even on their radar, because the magnitude of what they’re confronting is so significant.”

What Neumann is seeing is backed by a body of research on the impact of foreclosures during the financial crisis on the 2008 and 2012 elections. A University of California, Riverside, study found that neighborhoods with high rates of foreclosure during the Great Recession saw depressed voter turnout in 2008—likely because those facing the loss of a home had little time or energy to dedicate to detangling voting registration requirements. Another study found that foreclosed homeowners were less likely to go to the polls in the 2012 election. This effect seems to be particularly pronounced among voters of color. Research by Jacob Rugh, a sociologist at Brigham Young University, has found that the foreclosure crisis depressed voter turnout in the 2012 and 2016 elections among Black voters in swing states like Michigan and Wisconsin. In Florida, he found that the loss of homes to foreclosure as well as underwater mortgages lowered turnout among Latino Democrats and independents, but not Latino Republicans.

Rugh acknowledges that foreclosures and evictions are an imperfect parallel, in part because homeowners consistently vote at higher rates than renters. But research showing that foreclosures drive voters away from the polls “does inform what we might expect from a large-scale event of many evictions,” he says, noting that the loss of residential stability, whether as an owner or a renter, can make voting more complicated. The challenge is logistical—the need to update voter registration with a new address—but it’s also philosophical, he says: For some people, the loss of a home erodes trust in institutions, including the housing market and the voting process.

Foreclosures in 2008 also led to a short-lived voter suppression effort, in which Republicans in Michigan voiced plans to prevent voters who’d recently lost homes to foreclosure from voting using those addresses. Barack Obama’s 2008 campaign filed a federal lawsuit against the Michigan GOP in response, leading to an agreement between the parties and sworn declarations by the Republican Party to scrap the plan.

In 2020, the Republican Party is again facing scrutiny from Democrats over allegations of voter suppression, relating to cost-cutting measures at the US Postal Service that have led to mail delays and concerns about an effort to sabotage the timely arrival of mail-in ballots ahead of the November election. For people who have been evicted, these mail delays could make resolving address and absentee ballot issues even more difficult, says Miller.

“I think the reality is that there will be people who will lose their voice and lose their ability to vote due to evictions, due to these delays, and again, due to the lack of clarity around the rules,” he says.