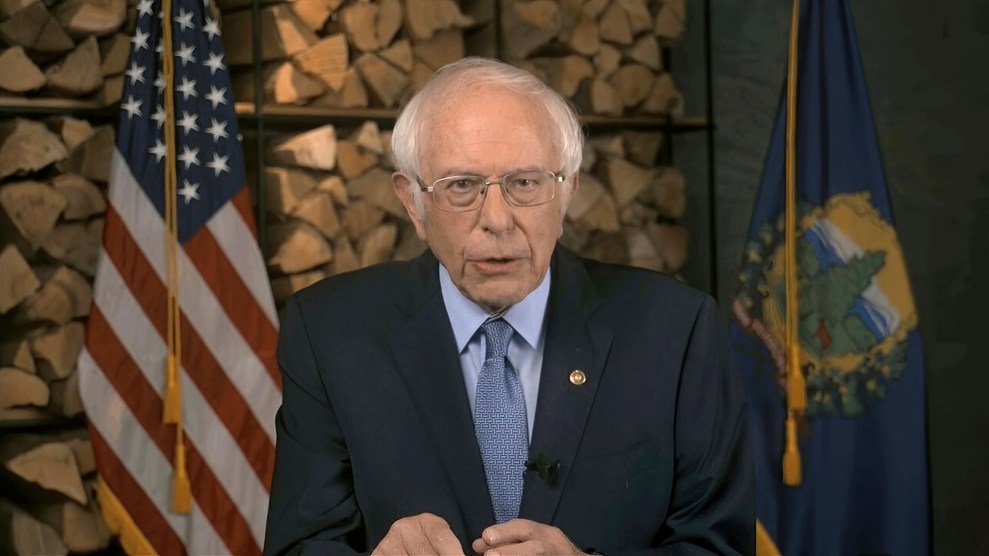 Bernie and his logs.Democratic National Convention via AP

At the 2016 Democratic National Convention, Vermont Sen. Bernie Sanders found himself struggling to control the political revolution he’d started. It had been a long and contentious primary against Hillary Clinton, and many Sanders delegates traveled to Philadelphia determined to have the last word. I interviewed one man from Wisconsin who said he was hunger-striking until Sanders won the nomination. Sanders had not dropped out and endorsed Clinton even after the primaries had ended, and he’d given some credence to the idea that the race might still be up in the air.

It was not. When that become more readily apparent early in the convention, Sanders addressed his delegates in a ballroom in the downtown convention center and urged them to support Hillary Clinton and reject Trump’s “bigotry.” The event turned rowdy. Sanders talked up progressive victories in the party platform and discussed the organizing work that would continue in the months to come, but he was frequently interrupted. Supporters booed when Clinton’s name came up. They shouted “Not with her!” and “Only you! When Clinton officially won the nomination the next night, some Sanders delegates walked out.

On Monday, in the penultimate address of the first day of the weirdest convention in recent memory, Sanders gave the whole party unity thing another shot. Maybe it just works better without the crowd. Standing in front of stacked firewood (take that, bookshelves) at an otherwise empty Burlington restaurant, he made a personal and concise case for his former rival. Sanders is not a man prone to brevity. He once published an entire book that was just the transcript of a very long speech he gave in the Senate. It was titled The Speech. On the campaign trail he would sometimes speak for an hour. At the 2016 convention, he held the floor for 30 minutes. At the 2020 convention, with the logs as his witness, he spoke for just eight.

And he sounded, at times, un-Bernie-like. There was a canned dig (“Nero fiddled while Rome burned—Trump golfs”) and a trademark Bidenism (“the soul of our nation”). Even the familiar Sanders lines sounded a little off in this stunted context, as if he were reading someone else’s idea of a Bernie Sanders speech rather than the real deal. At one point, he noted positively that Biden supported raising the minimum wage to “15 dollars an hour.” The Sanders I saw on the stump always said “15 bucks an hour.” Who was this imposter?

But Sanders was there to do a job, and he did it. He bridged the divide between the two rival campaigns in as little time as necessary, with only the subtlest acknowledgment of their serious policy disagreements. “We are the only industrialized nation not to guarantee health care for all people,” he said, and “Joe and I disagree on the best path to get to universal coverage.” But rather than get into what that disagreement was—a fight that more or less dominated every single Democratic primary debate—he added quickly that Biden “has a plan that will greatly expand health care and lower the cost of prescription drugs.” Sanders highlighted Biden’s support for paid family leave and childcare programs and, like everyone else who spoke, contrasted Biden with the demagogue in the White house.

And he was there on the night-one program not just as the leader of a large and vocal political coalition but as the ideological counterpoint to a man with whom he disagrees far more than he does Joe Biden—former Ohio Republican Gov. John Kasich, whose pre-recorded remarks aired at the convention just a short while earlier. Together, they formed the scaffolding of Biden’s pitch to voters who may be on the fence: It’s not that Biden shares either Kasich’s or Sanders’ politics—it’s that he is someone two people as different as John Kasich and Bernie Sanders can both get behind.

“These are not normal times,” said Kasich, standing in a gravel driveway, looking up at a drone.

“This is not normal,” noted Sanders in his own remarks. “And we must never treat it like it is.” He was describing Trump’s “authoritarian” leanings, but also, in a way, the alliances it necessitated. “As long as I am here, I will work with progressives, moderates, and, yes, conservatives, to preserve this nation from a threat that so many of our heroes fought and died to defeat.”

None of this should come as a surprise. In his praise of Biden on Monday, Sanders was simply doing what he talked about doing throughout his campaign—over and over and over again. Although Sanders campaigned for Clinton in 2016, and the data showed that Sanders supporters were less likely to vote for Trump in 2016 than 2008 Clinton supporters were to support John McCain, the stigma of perceived disloyalty from disgruntled Democrats stuck with him. In his second run for president, no matter how many times he promised to support the Democratic nominee, Sanders kept getting asked a variation of the same question: okay but…are you sure?

He said it last March:

Bernie Sanders vows to support the Democratic nominee, no matter who it is. #ctl #p2 pic.twitter.com/VnytnVVnSZ

He said it last October:

.@BernieSanders tells @NikolenDC he’d support Joe Biden if he’s the Democratic nominee for president. “We'll rally around whoever that candidate is.” https://t.co/aYIcGo5zvO pic.twitter.com/LHH0iRpfyG

He said in January.

He said it in February:

Presidential candidate and Vermont Sen. Bernie Sanders pledges to support the Democratic nominee, no matter who it is https://t.co/8epIb4I9VH #SandersTownHall pic.twitter.com/h1UfmCUjGj

He said it this March:

Bernie Sanders says he'd support Joe Biden if he's the nominee: "I hope to win the nomination. But if I don't win the nomination, I, and I think every other Democratic candidate, is prepared to come together to do everything humanly possible to defeat Donald Trump" #DemDebate pic.twitter.com/vCJH5CmXgG

It is hard, when you’ve spent your career crashing parties (Sanders’ first book is called Outsider in the House) and calling various elements of the party leadership corrupt, to convince committed partisans that you’re one of them. And he never truly will be. But Sanders has been trying to tell Democrats all cycle that he is a team player, and that if the time came for it, he’d deliver a performance exactly like he did Monday evening. Now maybe they will finally believe him.