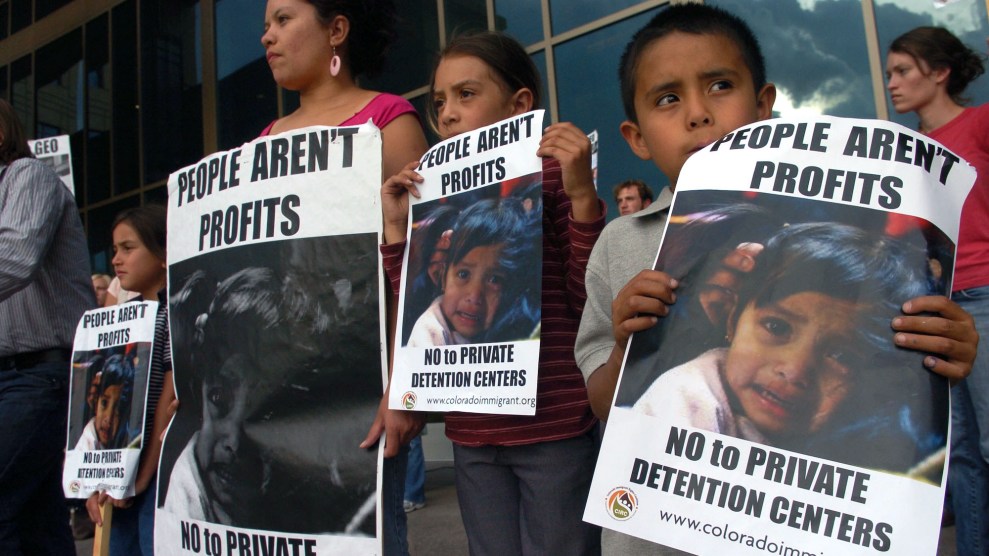 The election is nearly three months away, and the private prison industry has already shelled out more on the campaign than in any other year. Private prison PACs, employees, and their families have given more than $1.9 million to candidates and parties so far, according to the Center for Responsive Politics—14 percent more than they spent in 2016. About 92 percent of those donations went to Republicans, also a record.

This prodigious election spending makes a lot of sense. Private prison companies have enjoyed a cozy relationship with the Trump administration as it has increasingly relied on for-profit prisons to hold immigration detainees. Last year, the two largest prison companies, the GEO Group and CoreCivic, counted on federal dollars for more than half of their revenue, according to their annual reports. And now, Immigration and Customs Enforcement is inking long-term contracts with prison companies to detain thousands of immigrants beyond the end of Trump’s presidency.

In an earnings call last week, CoreCivic CEO Damon Hininger suggested that prison executives and the federal officials they work with are already anticipating various election scenarios including Democratic gains in Washington, DC. “We’ve had some conversations with folks in leadership and they’re always obviously preparing potentially what happens in the coming days, weeks and months—with not only the pandemic but also going into 2021 and maybe some outcomes in Congress and the White House,” Hininger told investors. “So they’re preparing. And with that, working with us to prepare.”

Part of that preparation is in response to Joe Biden’s criminal justice platform, which is openly hostile to prison companies’ bottom line. The Democratic presidential candidate has promised to revive an Obama-era policy of phasing out the use of private prisons to hold people convicted of federal crimes. (The policy barely took effect before it was reversed by Attorney General Jeff Sessions in early 2017.) Biden’s platform stops short of calling for an end to private immigration detention but says he will “make clear that the federal government should not use private facilities for any detention, including detention of undocumented immigrants,” as the Homeland Security Advisory Council did in late 2016. And Biden promises to create a new federal grant program that will only give money to states if they do not contract with private prisons.

GEO—which has experienced three years of growth under Trump—is responsible for the bulk of prison companies’ recent political spending. Its corporate PAC has been giving $20,000 in regular installments to the Trump Victory committee since April 2019. But the industry, which also includes smaller prison companies is also shelling out lots of cash to Republican lawmakers. The recipients include Sen. Corey Gardner of Colorado, where GEO and CoreCivic run networks of halfway houses and GEO is fighting a class-action lawsuit over allegations that it forced immigration detainees to work for little or no pay; Sen. Mitch McConnell of Kentucky; and Sen. Shelley Moore Capito of West Virginia, the chair of the appropriations committee homeland security subcommittee. One of the few Democrats is, again, Rep. Henry Cuellar, a conservative Texas Democrat and vocal defender of private prisons whose district includes both GEO and CoreCivic lockups.

It’s not just the prison executives who are focused on the consequences of the 2020 election. So are ICE and the US Marshals Service, Hininger said on the earnings call. According to Hininger, federal officials have been signing new detention center contracts even as the number of immigrants they detain has dropped precipitously during the pandemic. Over the last two weeks, he said, ICE has finalized 10-year contracts with CoreCivic’s 512-person T. Don Hutto Residential Center and GEO’s 1,840-bed South Texas Detention Complex. He added that CoreCivic expected to receive another 10-year contract with for its 1,000-bed Houston Processing Center in “a day or two.” “ICE really wants to maintain the capacity they’ve got nationally for their detention system,” he said.

Elected officials and local advocates have been fighting the contracts for these two Texas detention centers for months. In January, two months after ICE began soliciting bids for immigration detention beds in the state, Rep. Joaquin Castro and nine other Democratic representatives from Texas sent a letter to officials at the Department of Homeland Security and Office of Acquisition Management raising alarms about the prospect of 10-year deals being handed to CoreCivic and GEO without a competitive bidding process. “All three facilities ICE is targeting with this solicitation are notorious for a wide range of mistreatment, including various sexual assault cases and the deaths of individuals in custody,” they wrote. “If ICE is able to secure these contracts in Texas, it will mean extending the harm of this administration far beyond Trump’s term in office,” Bethany Carson, an organizer at the anti-private prison advocacy group Grassroots Leadership, said at the time.

ICE pulled a similar move late last year in California, locking in long-term deals for private immigrant detention centers days before the state enacted a ban on private prisons and detention centers. A weej before the new law went into effect, ICE granted GEO 15-year contracts for nearly 4,500 beds across 5 facilities, including the notorious Adelanto Detention Center outside Los Angeles.