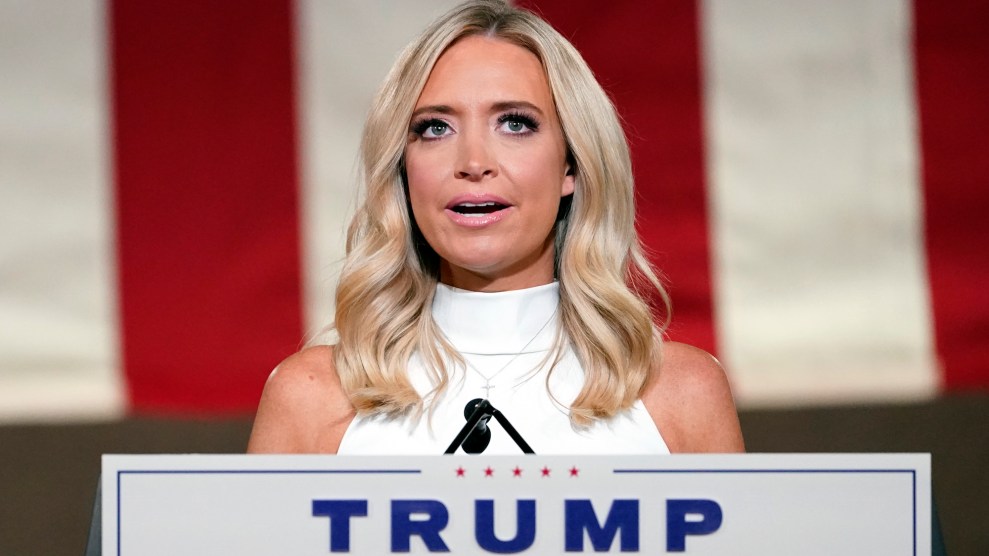 Wednesday night, White House press secretary Kayleigh McEnany went on prime time TV during the third night of the Republican National Convention and told what might be one of the biggest lies of the evening. President Trump, she said, “stands by Americans with preexisting conditions.”

To prove it, McEnany told a personal story. “Tonight, I’m here to share with you how he supported me—both as a new mom and as an American with a preexisting condition,” she said. She described how, in 2018, she decided to have a preventative double mastectomy and reconstructive surgery because she carries the BRCA 2 genetic mutation that put her at high risk for breast cancer as well as a host of other deadly cancers like ovarian cancer.

McEnany was moved when Trump called her after her reconstruction surgery to see how she was doing. “I was blown away,” she said. “Here was the leader of the free world caring about me.”

What McEnany didn’t tell the national audience was that the Trump administration is at this very moment fighting in court to end protections for people with preexisting conditions like hers. It has supported a lawsuit, brought by Republican state attorneys general, that would overturn the Affordable Care Act, better known as Obamacare. Despite many promises to do so, the Trump administration has not proposed any new health plan to replace it. As a result, the ACA is still the only federal law that requires health insurers to cover preexisting conditions. Without it, insurers will be free to return to the bad old days, when they could deny coverage to people with chronic illnesses or jack up premiums for those who got sick.

The case is now pending before the Supreme Court, with oral arguments scheduled a few days after the November election. If the administration is successful, McEnany is likely to find herself uninsurable, along with millions of the other “brave women” with breast cancer she invoked in her speech whom she encountered during her many hospital visits for breast scans and check-ups. “They were a testament to American strength,” she said. “They are American heroes.” In Trump’s America, it seems those heroes are honored by taking away their health insurance.