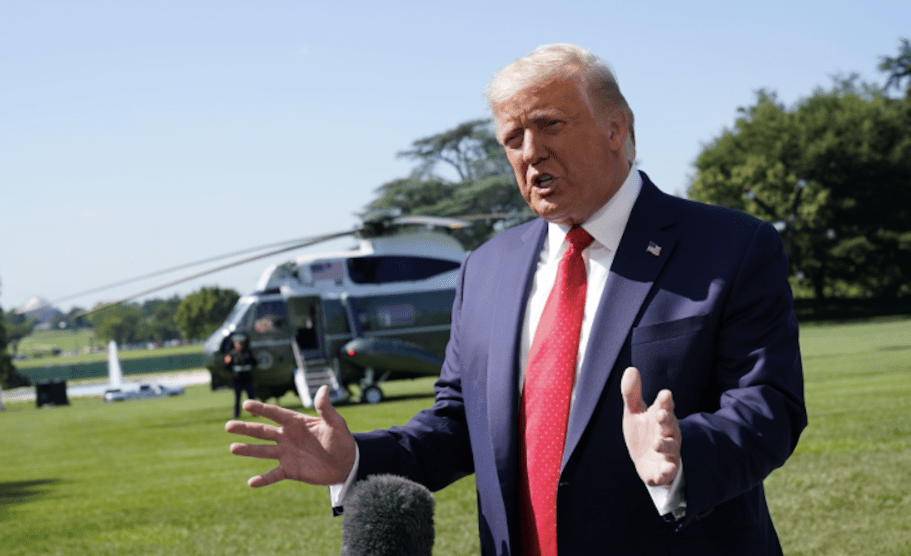 President Trump appeared to admit last week—twice—that he was blocking funds for the United States Postal Service because he believes doing so will boost his odds of reelection. These kinds of pronouncements naturally have Americans freaked out that the government is tampering with the ability to vote by mail in the midst of a pandemic and preventing a fair election. And they’re right—but not for the reasons Trump thinks.

As explosive as the president’s remarks were, his threat to block congressional Democrats’ request for $25 billion in emergency Postal Service funding made little sense. “They don’t have the money to do the universal mail-in voting,” he said at a White House coronavirus briefing. “So, therefore, they can’t do it, I guess.” But that hunch is misguided: It’s states—not the federal government—that are responsible for election procedures, and right now, only nine states are automatically sending registered voters a request for absentee ballots. In other words, Trump appeared to be blocking critical funding for a government agency, thus stalling coronavirus relief negotiations, out of a misplaced paranoia that Democrats would have the power to install a national mail-in voting system. Democrats’ request for the $25 billion has less do with the voting practices Trump openly abhors and more to do with assisting the agency amid the shortfall created by the pandemic, which caused mail advertisements and other sources of postal revenue to plummet.

But just because Trump’s logic is wrong doesn’t mean mail-in voting isn’t under attack. While Trump might not have a grasp of how he’s kneecapping the Postal Service, the president and his administration are indeed hampering the agency’s ability to manage the fast-approaching presidential election.

As Russell Berman writes in the Atlantic, much of the peril rests with Louis DeJoy, a Trump megadonor recently appointed postmaster general, for making changes that have likely contributed to the significant postal delays across the country. DeJoy has prohibited overtime work, directed workers to leave late-arriving mail for the following day, and instituted larger organizational restructurings—actions that could delay mail-in voting just when the demand for ballots is skyrocketing. My colleague AJ Vicens has a deeper look at how these changes have already disrupted Postal Service activities in Michigan, a key battleground state:

One recent morning Steve Wood, a mail clerk who works at the Michigan Metroplex, a massive mail sorting center near Detroit, said he and others at working at the Metroplex counted 400 all-purpose containers holding undelivered mail due to short staffing and other recent changes.

“That’s never—even during Christmas, when the Postal Service deals with 1.2 billion Christmas cards—we never had 400 containers of mail on the workroom floor,” he says. The coronavirus, which has killed several postal workers in Michigan, has brought “never-ending” turmoil, Wood says, which has only been exacerbated by changes cutting overtime, temporary employees, and access to mail sorting machines.

“DeJoy comes on the scene and it’s just feeding the chaos,” Woods says. “To do this in the middle of a pandemic when we’re short?”

The Postal Service appears to have also quietly moved to end to its longstanding practice of treating election mail with priority, no matter the postage rate, explains Tammy Patrick, a senior adviser at the nonprofit Democracy Fund. “This year, at this moment, is the first time that the Postal Service has changed how they talk about that,” Patrick says. Democrats are now accusing DeJoy of forcing states, already cash-strapped by the pandemic, to pay higher rates to ensure on-time delivery.

It’s these changes—not the unprecedented demand for absentee ballots or any funding shortfalls—that could end up disenfranchising whole swaths of voters. “The volume is not the problem,” Patrick says. “The Postal Service processes anywhere between right around 400 million mail pieces a day. So even if every voter in the United States was going to vote by mail, that would just be a couple of days’ worth of mail.”

Many Americans who view Trump and the inadequate Postal Service funding as the primary threats to the election have taken up a campaign to buy stamps. “The best way is simply to purchase USPS merch!” an Instagram account called @restoretheusps declared, echoing countless similar pleas on social media. “Just buying a costume, shirt, stamp, toy, wallet, etc. can help protect the post office.” But the idea that individual purchases, even when carried out by millions of citizens concerned for their democracy, can save one of the largest civilian employers in the country is magical thinking. After all, the Postal Service has been operating in the red for years, and by the billions. Much of the agency’s financial strife can be traced to the Postal Accountability and Enhancement Act of 2006, which made it nearly impossible for the Postal Service to raise rates while forcing the agency to pre-fund $5 billion annually for retiree benefits until the year 2056. (No other federal agency is burdened by such a staggering financial requirement.) In other words, it would take an act of Congress—not the mass buying of stamps—to save the USPS.

But in the short term, despite the new changes sweeping the Postal Service, there are some legitimate reasons to hold out hope. More states are implementing temporary changes aimed at making voting more accessible, such as sending mail-in ballots to all registered voters and formally asking courts to extend deadlines for mail-in voting. As calls to subpoena DeJoy mount, House Speaker Nancy Pelosi announced Sunday that the House would return early from recess in order to vote on a proposal to block Trump from further overhauling the USPS. But the best thing voters can do to ensure their ballots are counted, Patrick says, is simply to act as early as possible. “If we can get voters to request their ballot early, and return it early or through an in-person drop-off kind of alternative, then none of this matters,” Patrick says. So forget the fistfuls of merch, and get on that ballot request.