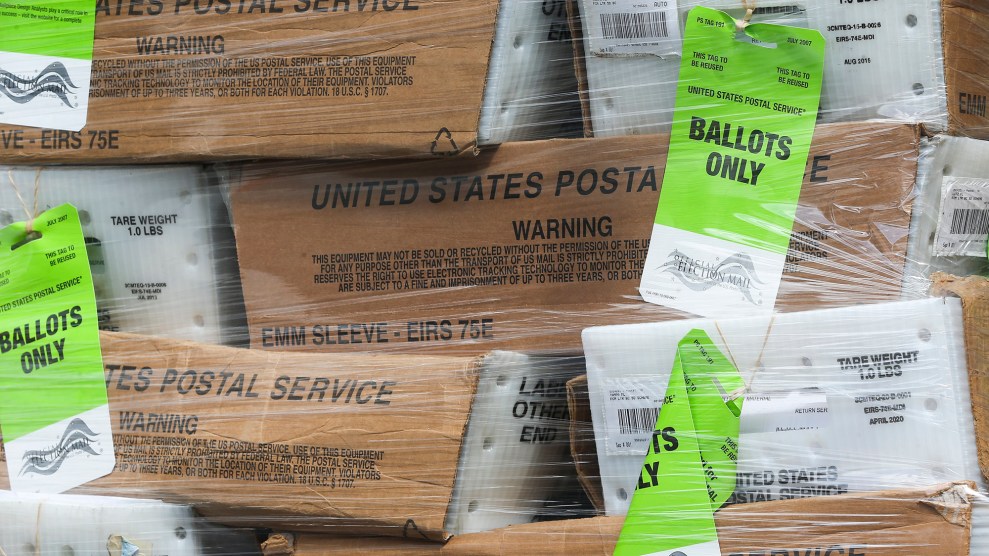 President Donald Trump has repeatedly outlined an election night scenario where one candidate appears to be leading in early returns, but might not be the winner once all votes are counted. It’s a way, he hopes, to wrap legally cast ballots that happen to be counted after election night in a shroud of illegitimacy.

“What’s going to happen on November 3 when somebody’s leading and they say, ‘Well, we haven’t counted the ballots, we have millions of ballots to count’?” he said during a press conference at the White House. “It’s a disaster.”

The president has spread the false notion that ballots counted after Election Day “show up out of nowhere.”

It’s true that some Americans should expect it to take weeks for their local election results to be finalized as record numbers of mail ballots trickle in. But there’s a simple step that could greatly speed things along. While many states allow ballots returned early to be opened or even counted as they arrive, a handful require officials to wait until Election Day.

In Michigan and Pennsylvania—two high-profile battlegrounds that this year will both for the first time allow anyone to vote by mail during a presidential election—efforts to allow early processing or counting have been hamstrung by Republican state legislatures, even in the face of pleas from nonpartisan election officials. Republican leaders in Pennsylvania are standing in the way of the change that county clerks say would speed things along at the same time they’ve said that post-election delays make it more likely the legislature will set aside the will of the state’s voters and step in to select an electoral college delegation.

While Michigan’s Republican-controlled state legislature voted Friday to allow some processing before Election Day, the initiative, which only lets jurisdictions of over 25,000 residents open outer envelopes and sort ballots one day early so they can be counted more efficiently on Election Day, took nearly ten months to pass. Democratic Secretary of State Jocelyn Benson has called the bill “a step in the right direction,” but one that “does not go nearly far enough to provide the relief that clerks have been seeking for more than a year.” Michigan Gov. Gretchen Whitmer has echoed the secretary of state, calling it a “first step.”

In any other climate, such mundane election administration legislation would barely register notice, but this year, the Republican officials standing in the way of local officials advocating for such tweaks seem to be enlisting in Trump’s ongoing attacks on the legitimacy of mail voting, which some see as part of a broader strategy to hang on to power in the event he loses the election. As part of the effort, the president has spread the false notions that ballots counted after election day represent “new ballots that show up out of nowhere” and are a clear sign of a “rigged election,” while signalling that delays that are a natural part of ensuring all votes are counted are suspect.

Michigan’s bill was put forward in January by Sen. Ruth Johnson, a Republican and a former Michigan Secretary of State who now chairs the Senate Elections Committee, well before the coronavirus prompted unprecedented interest in mail voting. While insisting the bill has “very strong bipartisan support and it is not a partisan issue,” she admitted that she’d faced opposition from her Republican colleagues, but argues it was due to a climate of mistrust that she said had been created by Benson. Johnson cited a range of actions by Benson, from her response to a lawsuit by blind voters seeking accommodation in voting by mail, to her decision to send every registered Michigan voter a mail ballot application in May. (Two courts have since affirmed Benson’s right to do so.)

Speaking to reporters this week outside of an Ann Arbor early voting center housed at the University of Michigan Museum of Art, Benson warned that the days between Tuesday’s election and Friday, by when she expects to be able to produce meaningful results, present an opportunity for disinformation designed to undermine confidence in the election.

If “any actor, foreign or domestic” sows doubt “we’re not going to stand for it.”

As mask-wearing students walked by, Benson said her office would be “mindful of the space” between the polls closing and results being publicized. Asked if she was concerned about the potential for the president to spread false news about Michigan’s results, Benson warned that if “any actor, foreign or domestic” sows doubt “we’re not going to stand for it,” outlining a plan to “counter any attempts to confuse the public with facts and data and transparency.”

In Pennsylvania, the Republicans who control the legislature have signed onto a bill allowing some ballot pre-processing, but not counting, to begin the Saturday before Election Day. But the move is part of a legislative package that would make it harder to vote by limiting mail ballots access and getting rid of ballot drop boxes—a key priority of the Trump campaign. Tom Wolf, the state’s Democratic governor, had called for 21 days of pre-election processing—a provision originally included but stripped as it progressed through the House—and says that he will not support the bill in its current form.

On August 26, Lisa Schaefer, the executive director of the County Commissioners Association of Pennsylvania, warned that “time was quickly running out” to enact changes like increased pre-processing or counting with enough runway for local election officials to implement new procedures. “As the experts in administering elections, counties urge prompt action by the General Assembly to prioritize a few simple changes to the law that will help them meet their goal of delivering timely and accurate results to Pennsylvania citizens, and make sure that every vote counts,” she said at the time.

A month later, county elections officials are still waiting for relief, Schaefer says, adding to uncertainty about the election that “really puts a lot of anxiety into a process that we really don’t want to have.”

While Shaefer says the association originally supported up to a 21-days of pre-processing, at this point, any extra time would be welcome. “Quite frankly, given that under current law we can’t start till 7 am on Election Day—when we’re already trying to run an in-person election at the same time—those extra three days would certainly be very helpful,” she says.

“A few simple changes to the law…will help them meet their goal of delivering timely and accurate results.”

Rep. Dan Moul, a Republican state representative from south central Pennsylvania who sponsored the bill, says the governor should sign it even if it doesn’t contain everything he wants. Moul says the period was shortened from 21 days over concerns that the move would be incompatible with laws allowing local officials to observe and challenge the opening of mail ballots—based on residency, a mismatched signature, or some voter error—up until the Friday before an election.

Moul admits that debate over his bill’s ban on drop boxes has been a key sticking point for Democrats. Moul says the depositories aren’t needed because voters can mail ballots. If they’re worried about the postal service’s well-documented issues, Moul says the solution is for voters to mail ballots back as soon as possible, and remains firmly opposed to making drop boxes available.

“You know why [Democrats] want it, I don’t need to tell you,” he said. “I’ll put it to you this way. I know why I don’t want them. It has one more point where voter fraud can take place.”

Barb Byrum, the county clerk of Ingham County, Michigan, found her state legislature’s delay over making the fix “unfathomable.” But she remains convinced that the president’s decision to push a partisan fight over mail voting has only increased the odds the election could go south.

“This is becoming beyond partisan,” she said. “People are believing these stories they’re hearing from the national level, from the president of the United States saying our election results are rigged, or saying that mail elections are fake or fraudulent. People are buying into these conspiracy theories and it’s making election administration more difficult in a year that’s clearly going to be extraordinarily busy.”