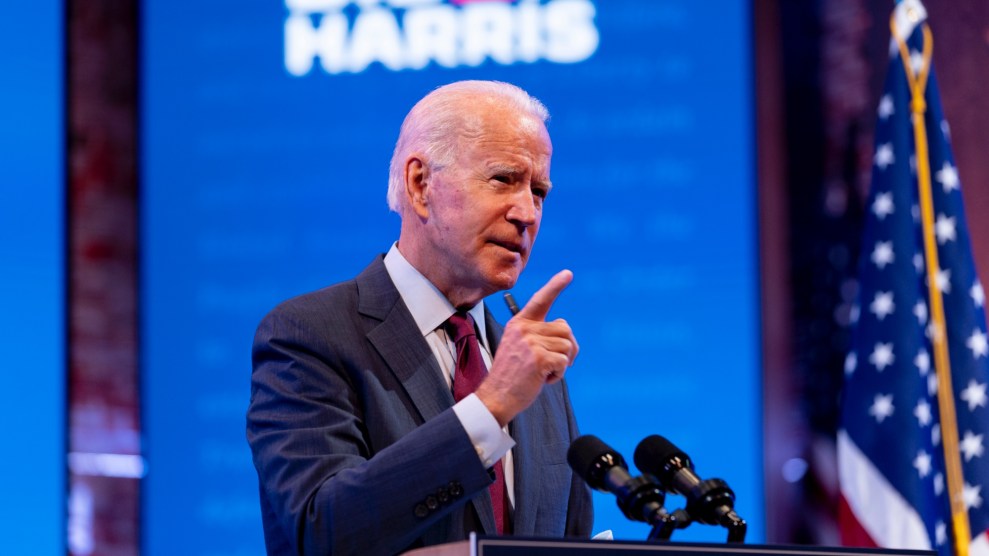 Joe Biden said Sunday that Republican senators should refuse to consider President Donald Trump’s Supreme Court nominee, Amy Coney Barrett, until after Election Day, warning that voters “are not going stand for this abuse of power.“

“Never before in our nation’s history has a Supreme Court Justice been nominated and installed while a presidential election is already underway,” Biden said in a speech in Wilmington, Delaware. “It defies every precedent and every expectation of a nation where the people are sovereign and the rule of law reigns.”

In his short remarks, the former vice president faulted Trump for nominating Barrett to replace Ruth Bader Ginsburg before the late justice “could be laid to rest.” And while Biden made what is likely to be a fruitless appeal to Republican senators to defy a push by the president and Majority Leader Mitch McConnell (R-Ky.) to confirm Barrett before Election Day, his real audience was voters, whom he urged to punish the GOP for its bid to “subvert” democracy.

Speaking shortly after Trump tweeted his hope that the Supreme Court would strike down Obamacare, Biden echoed Democrats’ preferred line of attack on Barrett, accusing the GOP of rushing to “overturn the Affordable Care Act on their way out the door.” “It doesn’t matter what the American people want,” Biden said. “President Trump sees a chance to fulfill his explicit mission to steal away the vital protections of the ACA from countless families who have come to rely on them for their health, their financial security, and the lives of those they love.”

Biden took a handful of questions from reporters, appearing confident and, in contrast to Trump, offering pointed answers. Asked about calls that Democrats should respond to the efforts to ram through Barrett’s confirmation by attempting to add more justices to the Supreme Court if they regain control of the chamber, Biden stayed on message. “I’m focused on making sure the American people understand that they’re being cut out of this process they’re entitled to be a part of and the cut out is designed in order to take away the ACA and your health care in the midst of a pandemic,” he said.

Biden on possibly expanding SCOTUS: "I'm focused on making sure the American people understand that they're being cut out of this process they're entitled to be a part of, and they're cut out of a design in order to take away the ACA & your health care in the midst of a pandemic" pic.twitter.com/WVOGwmJedm

Trump and his allies regularly charge that Biden, who is 77, is senile and unable to respond coherently to questions. Trump, who is 74, has also taken to baselessly charging that Biden is using some unknown medication. On Sunday morning he tweeted that Biden should take a drug test before their first debate on Tuesday.

Biden’s competent if unremarkable address on Sunday highlights a problem with Trump’s line of attack heading into a debate. Trump, at least among his supporters, has managed to lower the expectations for Biden so much that if Biden delivers a decent debate performance, and “does not appear weak, the tactic will have backfired,” as the New York Times noted.

Asked Sunday what he needs to do to succeed in this week’s debate, Biden was brief. “Just tell the truth,” he said.

“Just tell the truth,” Joe Biden says when asked what he needs to accomplish to be successful during Tuesday’s presidential debate, where he is set to face off against President Donald Trump. https://t.co/OEtXnrhQuW pic.twitter.com/7Qj2S45AcT