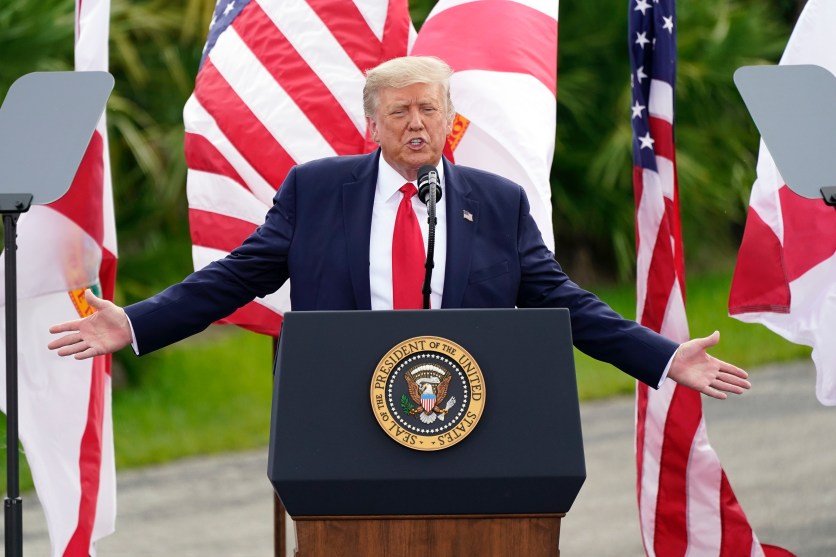 Responding to a report that his campaign was a facing a possible cash crunch in the final weeks before the election, Donald Trump tweeted Tuesday morning that, if his reelection operation comes up short, he’d put his own money into the race. According to Bloomberg, Trump is considering ponying up as much as $100 million. But does he even have that kind of money to spend?

In 2016, Trump pledged to spend $100 million on his campaign, but that never actually happened. He loaned his campaign roughly $47 million (and eventually forgave these debts). After making his wealth and ability to self fund his presidential run a central theme of his campaign—and claiming he alone among his Republican rivals would not be beholden to the megadonors who had Washington politicians in their pockets—Trump gladly accepted help from big contributors in the general election.

So far in 2020 Trump hasn’t spent any of his own money on the race, but according to the New York Times, Trump’s campaign may be running low on cash. Trump and the Republican National Committee have raised $1.1 billion for his reelection, but by the end of July they had spent more than $800 million (including on such pricey expenditures as an $11 million Super Bowl ad buy). Trump has yet to report his August fundraising numbers, but Democratic nominee Joe Biden had a monster haul last month—he raised more than $360 million, which is more than, say, John McCain spent on his entire 2008 campaign. Unless Trump’s campaign matches that figure, Trump may find himself coming up short in the final stretch unless he digs into his own pockets.

But even wealthy businessmen sometimes don’t have lots of cash on hand, and Trump may not be in a position to personally muster enough money to cover the gap he’s facing against Biden. The last, best picture we have of Trump’s assets comes from his most recent personal financial disclosure. It shows that at the end of 2019 Trump had anywhere between $46.7 million and $156.6 million available in checking or money-market accounts. Assuming Trump’s cash reserves are near the top of that range, a $100 million loan would consume most of his available cash. Even a loan of $50 million might be a heavy lift. Trump does have a stock portfolio and plenty of properties he could sell, but most of those would be hard to convert to cash in a short period of time.

If Trump has access to $100m in cash, then I have a gold plated rainbow unicorn. https://t.co/pazmtS2UmO

Also, a lot has happened since Trump filed that financial disclosure. In particular, a pandemic that battered the international travel and hotel business, which makes up about two-thirds of Trump’s annual business revenues. At one point last spring, nearly every Trump property was closed. At least one—his Vancouver hotel—seems to have been permanently shuttered.

Given the impact on his business, which was already struggling in some areas before the pandemic, Trump might have more pressing needs for his cash. For example, his Scottish golf resorts have been losing money for years, and that was before the COVID-19 essentially cancelled the 2020 summer golf season for international travelers. On top of that, Trump’s company has about $479 million in loans coming due in the next four years that Trump will either have to pay off or refinance.

Ultimately, Trump may have to make a difficult choice between rescuing his political operation and his business empire.