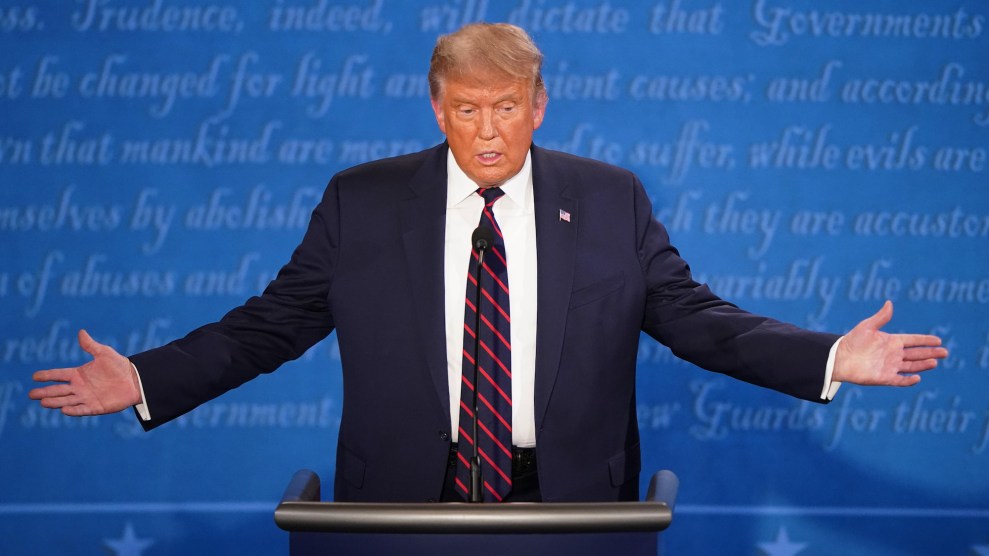 It was hard to hear in the first twenty minutes of incessant cross-talk of Donald Trump repeatedly interrupting Joe Biden, but the takeaway of the start of the first presidential debate was clear: Yes, the president sees the recent vacancy on the Supreme Court as an opening to dismantle the Affordable Care Act.

When Fox News’ Chris Wallace kicked off the debate with a question about the vacancy on the Supreme Court, Biden immediately pivoted to his comfort zone: The lawsuit before the Supreme Court that threatens to gut the ACA. “What’s at stake here is the president has made it clear that he wants to get rid of the Affordable Care Act,” Biden said. “He’s in the Supreme Court right now trying to get rid of the Affordable Care Act.” The former vice president added that Amy Coney Barrett, the conservative judge Trump nominated to replace Justice Ruth Bader Ginsburg, had written she does not think the ACA is constitutional.

Trump ran for the White House on a promise to dismantle Obamacare, and he and his Republican colleagues have spent the entirety of his tenure attempting to do so. In the first year of his presidency, the House passed a bill to erase the ACA and it nearly passed the Senate before it failed by one vote. But later that year, Congress passed Trump’s tax bill that repealed the ACA’s individual mandate—which Trump bragged about during a heated exchange with Biden. That change is now the basis of the lawsuit now pending before the Supreme Court. If the court does rule against the law, it would leave nearly 30 million people without health care immediately and would threaten the coverage of almost 130 million Americans with preexisting conditions.

Trump accused Biden of trying to “extinguish” private health care and replace it with “socialist medicine.” Biden countered by explaining that his health care plan, which proposes to expand and improve Obamacare while allowing people to keep their private insurance. The heated cross-talk made both men’s arguments nearly impossible to decipher. At one point, Biden, exasperated, said, “Will you shut up, man?”

The president had nothing to offer in terms of what he’d put in place of the ACA. When Wallace noted that Trump has not come up with a comprehensive plan to replace the ACA and asked him to define the Trump health care plan, the president dodged offering any details about his own proposal. Instead, he attacked the moderator. “I guess I’m debating you, not him,” Trump replied.