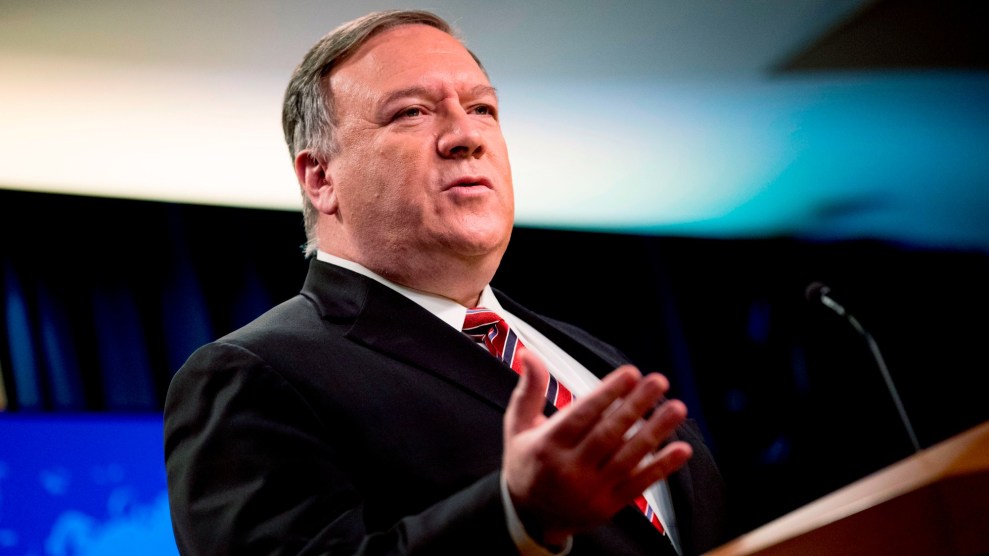 Secretary of State Mike Pompeo urged foreign leaders to “secure unalienable rights” in a United Nations speech on Wednesday, which laid the “crisis” in international human rights at the feet of longtime American adversaries and multilateral bodies like the UN. “Authoritarian governments, from China to Iran to Venezuela, are depriving our fellow human beings of their basic rights,” he said. “Meanwhile, many multinational organizations have lost their way, focusing on partisan policy preferences while failing to defend fundamental rights.”

Pompeo’s speech, which was part of an event hosted by the United States during the UN General Assembly, was marketed as a celebration of the Universal Declaration of Human Rights, the foundational document for decades of human rights policy. Instead, Pompeo promoted his own narrowly-defined idea of human rights, which was formalized last month in a report from a controversial State Department advisory body. Known as the Commission on Unalienable Rights, the group was stocked with critics of contraception, same-sex marriage, and abortion, including Pompeo’s former boss. In its final report, which was released last month, the commission elevated some rights like religious freedom as “unalienable,” while dismissing abortion and same-sex marriages as “divisive social and political controversies.”

Since the publication of the report, Pompeo has wasted no time promoting it on the world stage. Last week, the US delegation to the UN office in Geneva staged a virtual event with two commission leaders to “explain” the report. Ahead of Pompeo’s speech on Wednesday, State Department officials solicited support from the European Union for its human rights commission, but once that met with a tepid response, “rebranded their outreach efforts” around the Universal Declaration for Human Rights,” the New York Times reported. That recruitment method still failed to get any major European allies to sign a joint statement, released by the State Department, promoting the view that individual countries should “recognize the many differences in our cultural, political, legal, religious, and other traditions, yet reaffirm fundamental freedoms and rights for all.” Traditional US allies such as Great Britain, France, Germany, and Canada did not sign the document, but countries with notoriously poor human rights records like Saudi Arabia and the United Arab Emirates did.

“You can tell a US priority initiative on human rights is wildly off-track when it attracts support from Uzbekistan, Saudi Arabia, and the Democratic Republic of Congo, but not Sweden, Norway, France, or the UK,” Rob Berschinski, senior vice president for policy at Human Rights First, told me.

For as much as Pompeo wants to batter US adversaries like China and Venezuela, it’s his own flexible definition of human rights that is most attractive to authoritarian leaders. In his speech, Pompeo said the commission’s report should “serve as an inspiration to other nations and people all across the world,” adding, “they should turn to their traditions and rededicate themselves to their moral, philosophical, and religious resources to reaffirm the rights that are inherent in all persons.” This idea—that countries can use their own cultural norms as a bulwark against the global human rights consensus—is “exactly what the governments in Beijing and Tehran want to hear,” Berschinski said. “They will no doubt use this message to ignore calls to stop abusing their citizens.”