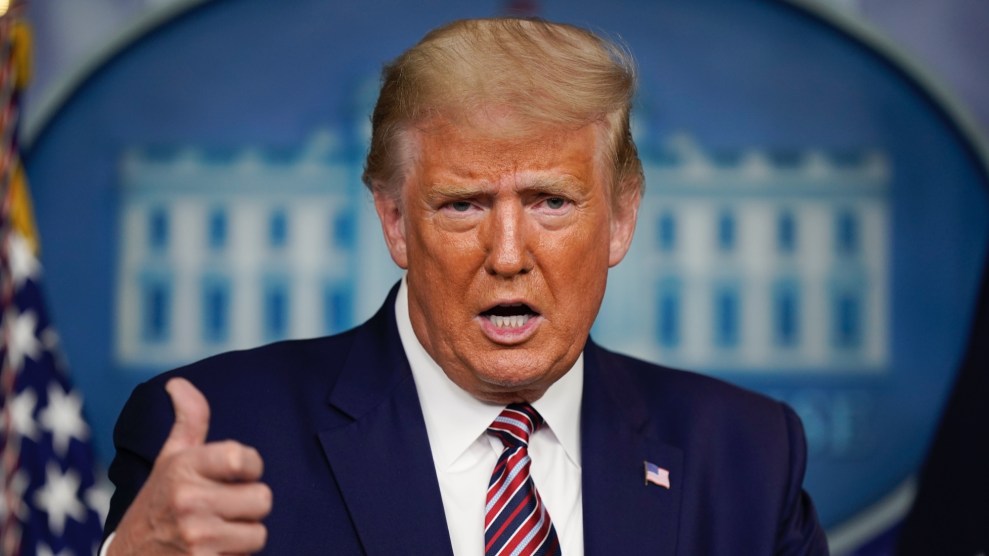 President Donald Trump during a news conference at the White House on September 27.Carolyn Kaster/AP

President Donald Trump is not that rich, he’s losing millions of dollars a year, and he barely pays any income tax, according to a new investigation by the New York Times.

The Times just revealed that it has obtained decades of Trump’s federal tax return data, which reveals that he paid a scant $750 income taxes in 2016 and the same amount in 2017, while paying no income taxes at all in 10 of the previous 15 years.

Trump paid so little income tax because, according to his tax returns, he was losing money hand over fist. In 2018, “Trump announced in his [annual financial] disclosure that he had made at least $434.9 million,” the Times reports. “The tax records deliver a very different portrait of his bottom line: $47.4 million in losses.”

“Ultimately, Mr. Trump has been more successful playing a business mogul than being one in real life,” the report says. It found that that Trump has been strikingly unsuccessful in business since the 1990s, even as he sold himself as a fabulously rich dealmaker. His appearance on the reality show The Apprentice netted him $427.4 million in licensing and endorsement deals. But Trump “invested much of that in a collection of businesses, mostly golf courses, that in the years since have steadily devoured cash—much as  the money he secretly received from his father financed a spree of quixotic overspending that led to his collapse in the early 1990s,” the Times reports.

The report also noted that Trump has hundreds of millions in loans coming due in the next few years. As Mother Jones‘ Russ Choma has reported, this $500 million in debt could threaten his personal assets and pose a ethical minefield if he is reelected. The story also details Trump’s efforts to write off his family’s 50,000-square-foot mansion as an investment property, paying questionable consulting fees to Ivanka Trump, and claiming deductions for expenses such as $70,000 worth of hairstyling.

Trump disputed the Times scoop at a news conference Sunday, but provided no specifics. “It’s fake news,” he said. “It’s totally fake news.” He refused to answer a question about how much federal income tax he’s paid. “I’ve paid a lot and I’ve paid a lot of state income taxes too,” he said. Trump claimed, as he has continuously since 2016, that he has not released his taxes because he is under IRS audit. “It will all be revealed,” he promised. “It’s gonna come out after the audit.“

The Times reported that Alan Garten, a Trump Organization lawyer, requested the documents on which the newspaper based its report. After the paper declined, Garten disputed the amount of taxes Trump had paid. Garten claimed that Trump had paid “tens of millions of dollars in personal taxes to the federal government,” though the Times reported that Garten was conflating income taxes and other federal taxes and was mischaracterizing Trump’s use of tax credits. The Times says it will be publishing additional articles on Trump’s taxes and finances in the coming weeks.

The Times says that the Trump’s Organization’s losses “lend credence to the notion” that his presidential campaign, launched in 2015, “was at least in part a gambit to reanimate the marketability of his name.“