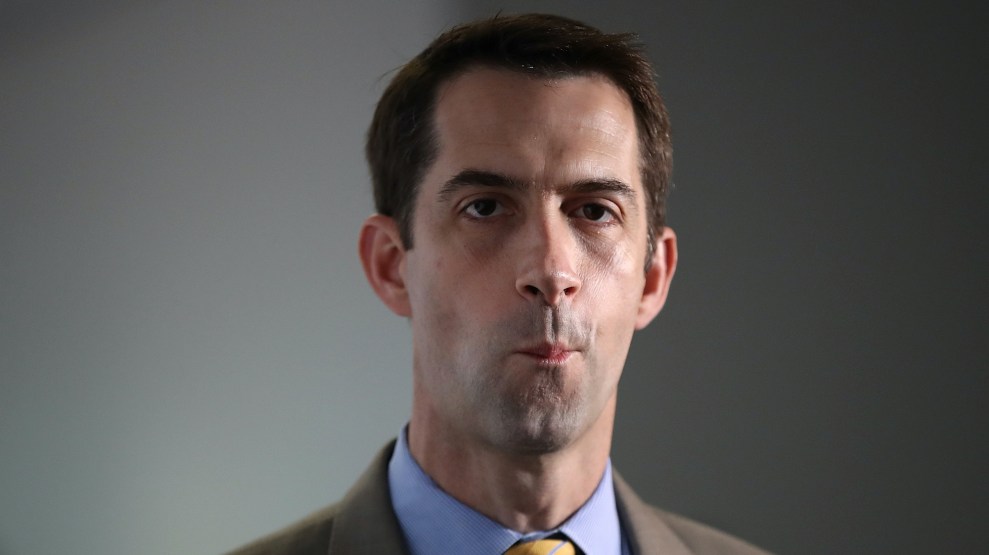 Now those chickens are coming home to roost.

On Fox News Sunday, host Chris Wallace grilled Sen. Tom Cotton after the Arkansas Republican said the Senate “will move forward without delay” to confirm President Donald Trump’s nominee, who may be announced as soon as next week. Mid-interview, Wallace played back a 2016 clip of Cotton defending the Senate for refusing to consider President Barack Obama’s nominee to replace Scalia, Merrick Garland. “Why would we cut off the national debate about this next justice?” Cotton asked in the clip. “Why would we squelch the voice of the people? Why would we deny the voters a chance to weigh in on the makeup of the Supreme Court?”

In response, Cotton argued that election results in 2018 gave Senate Republicans a “mandate” to do, well, whatever the hell they want: “In 2014, the American people elected a Republican majority of the Senate to put the brakes on President Obama’s judicial nominations,” he said. “In 2018, we had a referendum on this question—just a month before the 2018 midterms, we had the vote on Justice Kavanaugh. There could not have been a clearer mandate, because the American people didn’t just elect Republicans, they expanded our majority. They defeated four Democratic senators who voted against Justice Kavanaugh. They reelected the one Democratic senator who did vote for Justice Kavanaugh.”

“You don’t see any hypocrisy between that position then and this position now?” Wallace asked.

“The Senate majority is performing a constitutional duty,” Cotton repeated, “and fulfilling the mandate the voters gave us in 2016 and especially in 2018.”

It remains to be seen whether accusations of hypocrisy will have any measurable effect on Senate Republicans’ actions now. Sen. Susan Collins of Maine said yesterday the Senate should wait for the election winner to pick Ginsburg’s replacement; on Sunday, Alaska Sen. Lisa Murkowski said she would not vote to confirm a nominee before Election Day. Since Ginsburg’s death Thursday night, Majority Leader Mitch McConnell has been urging other fence-sitters to “keep their powder dry” and offering justifications —and potential talking points—for why the situation with Ginsburg’s seat is actually, really, not at all like situation with Garland.

For those keeping score, though, be sure to read my colleague Tim Murphy’s long (but not comprehensive) list of GOP senators who, like Cotton, said a Supreme Court nominee shouldn’t be confirmed in an election year.