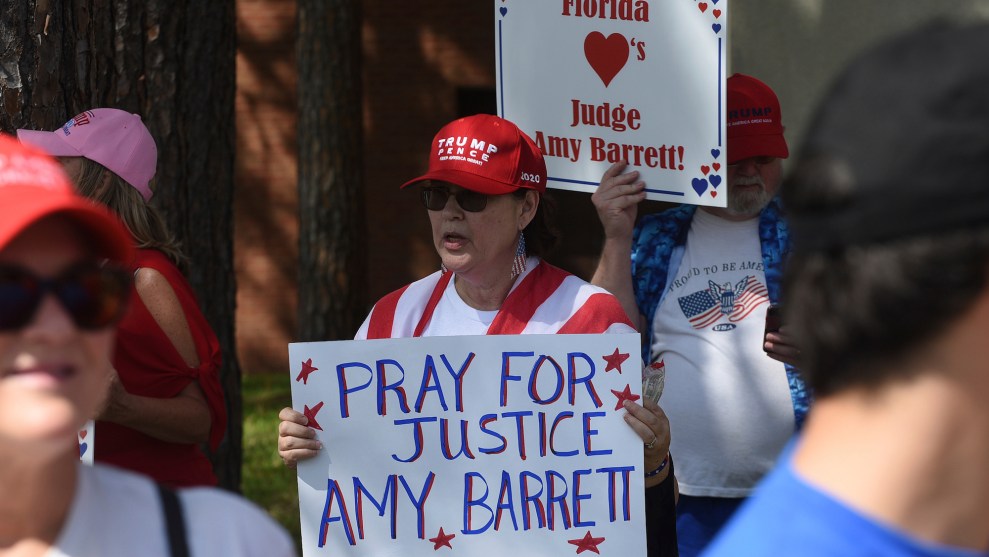 A woman holds a placard in support of Judge Amy Coney Barrett as a potential nominee for Supreme Court Justice as supporters of U.S President Donald Trump arrive at a Great American Comeback campaign rally at the Jacksonville JetPort at Cecil Airport. Paul Hennessy/Sipa via AP Images

President Trump announced today that he would nominate 7th Circuit Court of Appeals Judge Amy Coney Barrett to fill the seat on the Supreme Court vacated after the death of Justice Ruth Bader Ginsburg last week.

Barrett, 48, is a favorite of evangelicals who hope that she’ll join with the court’s other conservatives to overturn Roe v. Wade. Trump appointed Barrett to the 7th Circuit in 2017, in what court watchers believed was the first step to elevating her to the high court. She had impeccable conservative credentials as a former clerk to the late Justice Antonin Scalia and an active member in the Federalist Society, which has effectively managed Trump’s judicial nominations. But for a Supreme Court nominee, her resume was somewhat thin.

She spent only two years in private law practice and has never tried a case or argued an appeal. Nor has she argued before the Supreme Court, as had another law professor, Justice Elena Kagan, before she was nominated to the high court. Most of Barrett’s private legal work involved only civil cases, not criminal ones. While she’d spent 15 years as a law professor at Notre Dame, her alma mater, Barrett had never served as a judge until Trump tapped her for the 7th Circuit.

Barrett couldn’t be more different from the woman she might replace. Her nomination is comparable to President George H.W. Bush’s replacement of civil rights icon Justice Thurgood Marshall with arch-conservative Justice Clarence Thomas.

Barrett is popular with evangelicals and conservative Christians because she’s a devout Catholic with seven children, two of whom were adopted from Haiti and the youngest of whom has Down syndrome. She is viewed as staunchly anti-abortion, thanks to her association with Faculty for Life at Notre Dame and her opposition to the birth-control coverage mandated in the Affordable Care Act, which she called “a grave infringement on religious liberty.” Barrett is also affiliated with a charismatic Christian group called People of Praise, in which female members were until recently assigned personal advisers called “handmaids.”

Members of the group take a covenant pledging lifelong loyalty to each other and donate five percent of their income to the group, which teaches that men have authority over the family, including their wives. They believe in prophecy, divine healing, and speaking in tongues, practices that could make for an interesting confirmation hearing. Barrett did not disclose her membership in People of Praise before her 7th Circuit confirmation, but Sen. Diane Feinstein (D-Calif.) attempted to probe her religious beliefs during her hearing, saying that “the dogma lives loudly within you,” a comment that has led Republicans to accuse Democrats of anti-Catholic bias.

But even former members of People of Praise have opposed Barrett’s nomination to the high court. As I wrote this week:

Two years ago, when Barrett’s name was floated as a potential candidate to replace retiring Justice Anthony Kennedy, a post appeared in a Facebook group of ex-members of charismatic Christian communities. “I don’t want a current member of this cult to be sitting on the Supreme Court,” the onetime People of Praise member wrote. “And it was not very many years ago that I admired them very much and was almost seduced into thinking they had something spiritually real and rich going for them.” More recently, another ex-member wrote, “I think we better start now fighting her nomination. I can’t quite imagine People of Praise on the Supreme Court.”

Since joining the 7th Circuit, Barrett has been a reliable conservative vote on cases involving immigration and sex discrimination, and wrote a notable dissent in a gun case, in which she argued that a law banning people found guilty of a felony from owning guns violated the Second Amendment. Her reasoning was that the man in the case had been guilty of mail fraud, a nonviolent offense. The case was an example of her originalist legal philosophy, as she based her argument on the fact that in the early days of the republic, legislatures took guns away only from people who were considered dangerous.

Hearings on Barrett’s nomination are likely to be scheduled as soon as possible, given Trump’s desire to have her installed on the court before the presidential election on November 3.