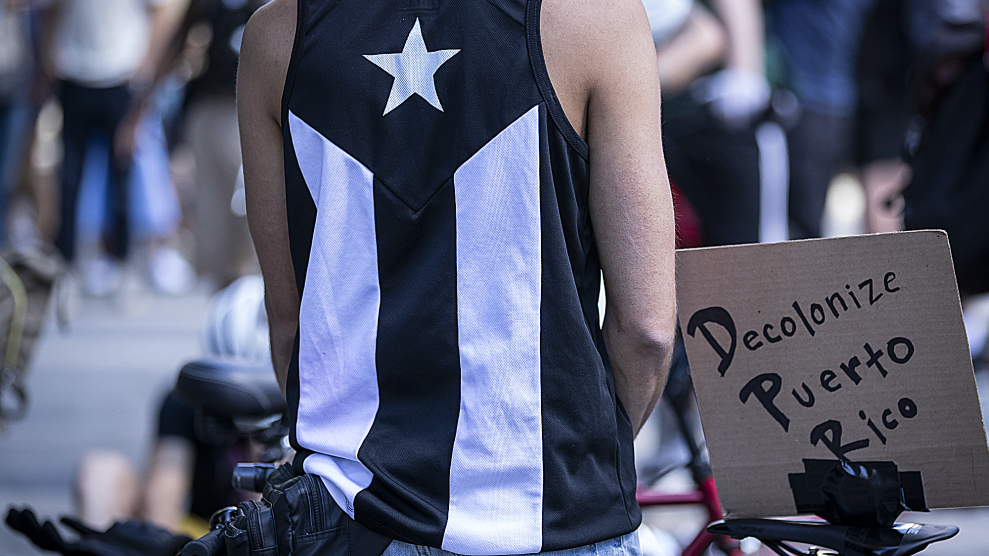 If all the sculptures in North America got together for a party, only one would stand taller than Lady Liberty’s torch: Christopher Columbus on a three-sailed ship, wrought in bronze. Clocking in at 6,500 tons with a height of 350 feet, the “Birth of the New World” has 45 feet on the Statue of Liberty, and like her, presides over a kind of port of entry: the shores of Puerto Rico, one of the first places Columbus and other Spaniards made landfall in their conquest of the so-called “New World.”

It’s an unlikely place for the giant sculpture. Though 76 percent of the island’s residents identify as “white,” studies show that most Puerto Ricans have varying degrees of Taíno ancestry, meaning they are descended from the Native people Columbus and his men enslaved and killed. And on the eve of Indigenous People’s Day, in a year when monuments to colonizers have fallen left and right, some Puerto Ricans are renewing their call for this one to be dismantled.

When all the Columbus statues have been torn down, you meet the final Columbus statue boss in Arecibo, Puerto Rico. This thing is an absolute unit. 360 feet tall. pic.twitter.com/CLfbh7Ztag

“The statue is really a tribute to genocide, colonialism, religious intolerance, racism, gender violence, and white supremacy,” says R. Múkaro Borrero, president of the United Confederation of Taíno People (UCTP). “There are mixed feelings among locals, but Taíno and other Indigenous peoples of Borikén [an Indigenous name for the island] would like to see it gone, as it is looked upon as an embarrassment.”

Tania Gonzalez, a University of Puerto Rico medical student of mixed European, African, and Indigenous descent, says she and her friends find the monument “ugly and unnecessary.” She used to see it regularly from the highway when visiting her dad in Arecibo. “It was an eyesore,” she says. “I think it’s sad that people in a colony are educated to idolize colonizers, to the point where they’re inspired to erect a statue to honor one.”

The hulking bronze Columbus and his ship landed in Arecibo after six US cities chose to give it a wide berth.The sculpture was created by Russian artist Zurab Tsereteli, whose similar and widely reviled monument to Peter the Great has reportedly only stayed standing in Moscow thanks to Tsereteli’s coziness with Russian elites. He intended to gift the Columbus monument to the US mainland, but in the 90s,New York, Miami, Fort Lauderdale, Baltimore, Columbus, and St. Petersburg all rejected offers to host it. (The sculptor also created a 150-foot-tall egg-shaped Columbus statue that stands in Seville, Spain.)

Tsereteli’s hopes of erecting “Birth of the New World” in New York City were briefly revived in 1997, when Donald Trump sought a deal to secure it for his West Side Yards development. “This man is major and legit,” Trump said of Tsereteli, but then-mayor Rudy Giuliani and other city leaders nixed plans to accept the sculpture.

In 1998, Tsereteli began talks to erect it in the Puerto Rican city of Cataño, 50 miles down the coast from Arecibo. Alongside other Indigenous groups like El Movimiento Indígena Jíbaro Boricua, the UCTP has been fighting “Birth of the New World” ever since, filing petitions, writing letters, and meeting with local politicians who have proven unsympathetic to their pleas.

Borrero adds that the continued suffering from Hurricane Maria, recent earthquakes, and the COVID-19 crisis didn’t stop his community from marching through San Juan, the island’s capital, to protest colonial monuments (including plaza and street names) during the nationwide uprisings back in July. Building on that momentum, the UCTP recently launched a community survey to poll Puerto Ricans on their support for removing Columbus statues and changing “Columbus Day” to “Indigenous People’s Day.” They’re also working to build more statues of Indigenous people, such as those which already exist in cities like Cataño and Isabela.

City leaders say that since its installation in 2017, “Birth of the New World” has boosted tourism. Arecibo Mayor Carlos Molina credits it with attracting enough visitors to open 100 local businesses that have created 1,000 jobs as of 2020, and last year, the Senate of Puerto Rico passed a measure ordering island transit authorities to look into creating a highway rest area overlooking the monument.

But local opponents of the statue say no amount of money can justify its continued existence on their shores. “I hate that statue,” says Santiago Reyes Acosta, who lives in Río Piedras, Puerto Rico and hails from Ecuador. “It’s an absolute insult to any culture of any territory that was at some moment under Spanish imperial rule.”

Gonzalez, the medical student, thinks there are better options for promoting tourism on an island as beautiful and diverse as Puerto Rico. Funding local art projects and natural resource conservation “could’ve provided a more accurate representation of us,” she says. “Our caverns, rivers, beaches, and mountains are much more necessary to uphold than a 400-foot hunk of metal.”

Borrero’s vision is strikingly similar. The Columbus in Arecibo, he says, would be better for Puerto Rican tourism if it were sunk off the coast to create an artificial reef.